Four Legs on the Rainbow Bridge 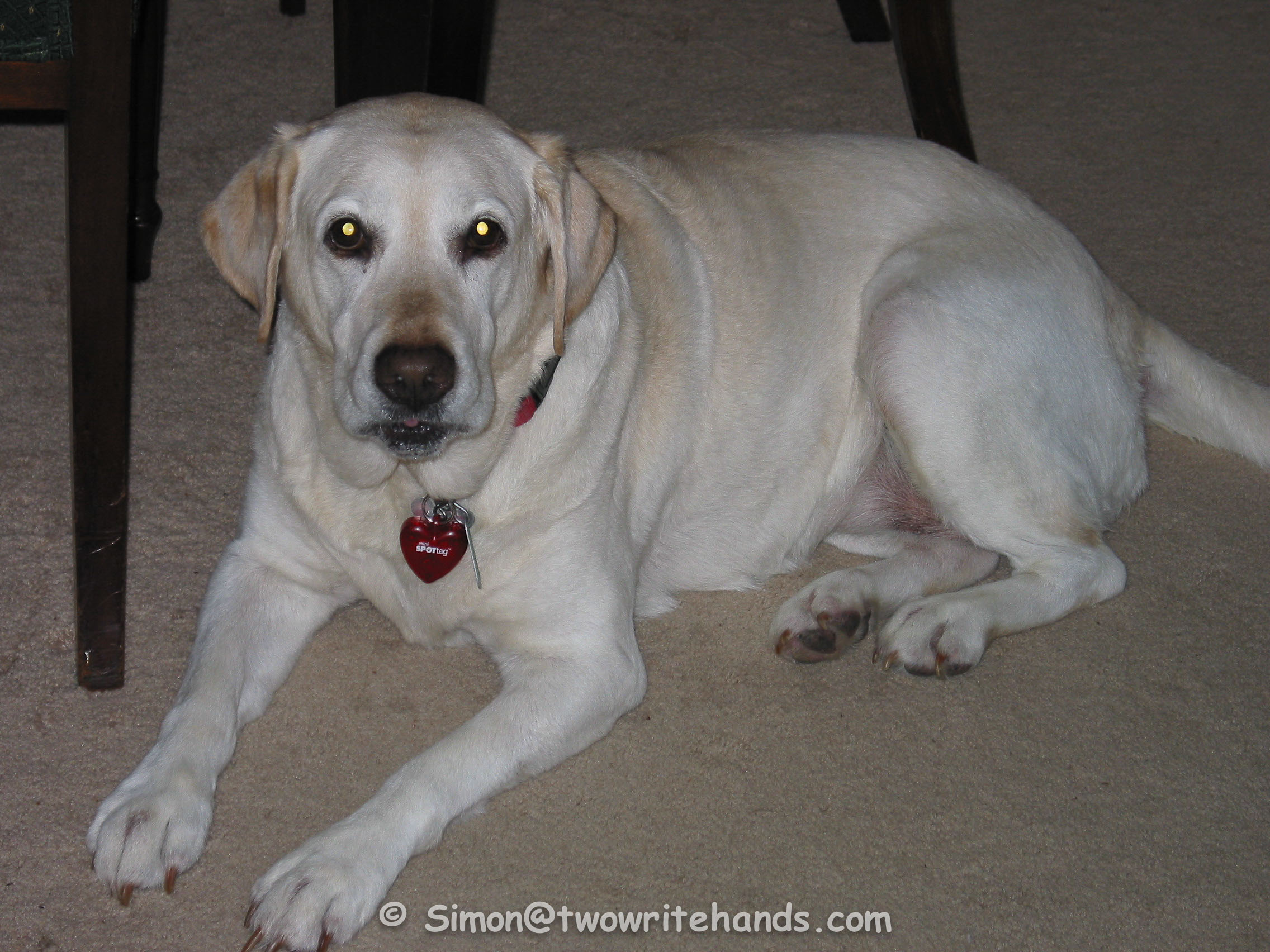 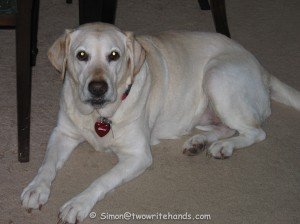 On Friday, August 8, 2014, C.J., my sixteen and-a-half-year-old retired guide dog, took her final journey on this plane of existence. This phenomenal yellow Lab was my constant guide for 11 years, and we walked a lot of miles in a lot of cities and towns together. So let me tell you about this beautiful, precious girl.

The first time I saw C.J. was at Southeastern Guide Dogs in Palmetto, Florida in the spring of 2000. I had made the difficult decision to retire my then guide, Buffy, and was ready to begin training with C.J..

My first impression of C.J. was that she was a sweet pup with a calm disposition and a non-stop tail. As the 12 days we spent training to work together as a team proved beyond any doubt, she was also a kick-ass guide.

When we got home to Atlanta, C.J. easily fell in step with my routine of traveling to and from work in Midtown via bus and subway, keeping up with the activities of our two teenage boys and otherwise guiding me through a wide variety of work-related and social events. Despite the hectic pace, nothing phased her.

My girl was only two years old, but still had a lot of puppy in her, which lasted right up until just before her retirement. Although she occasionally displayed Alpha tendencies, when it came to Buffy, she was very respectful.

C.J. always let Buffy come into the house from the yard first, and she didn’t try to engage in any rough play with her. She didn’t lie in any of Buffy’s places, but found spots of her own. Even after Buffy crossed the Rainbow Bridge on October 25, 2001, C.J. would never lie in Buffy’s places.

Since C.J was a Lab, she was an automatic chow hound. Despite this, we rarely had any problems with her trying to steal food, in or out of harness. However, as with all my dogs, anything on the ground was fair game.

In spite of my best efforts to discourage vacuum cleaner mode while walking out doors, C.J. was sometimes able to outsmart me. One day, as we were walking from work to the train station, I heard a male voice say as he and his companion passed us, “Hey, look, that dog has a submarine sandwich in its mouth!”

The comment registered a few steps farther down the sidewalk, and I stopped and reached down. Sure enough, my girl was holding a sub roll in her teeth like a baton. It must have been right in our path, and she was able to pick it up without my noticing. To this day, I believe that her intent was to wait until we got to the platform, and then devour it in the noisy station while we waited for the train. It was all I could do to keep from laughing while I scolded her and removed the purloined feast from her jaws.

C.J’s best guide dog buddy was my friend, Rita’s, yellow Lab, Ramsee. Not only did the two experience “The Blind Room“, but they watched their humans ingest a lot of dark beer and burgers at our favorite watering hole in Midtown.

The two girls were the cause of much mirth over the years, until we moved to New Bern in 2006. While I was working as Public Education Coordinator for Center for the Visually Impaired in Midtown, Rita was a few blocks away working as Program Analyst for the FDA. She also volunteered with me for CVI’s STARS After School Program, so we got to hang out together.

Late one afternoon, there was some kind of reception going on in CVI’s lobby. Rita’s daughter, Toni was volunteering for that do, and Rita and I thought we would go out to see her.

Now, my office was in Client Services, which was directly off the lobby. Rita and Ramsee went through the door from Client Services, and C.J. and I were right behind them. When Ramsee spied Toni, she nearly pulled Rita off her feet. Rita compensated by giving Ramsee a strong yank on the leash in order to get her back under control. As her elbow shot back, I walked directly into it.

So how did these two mature, self-confident professional women react to this situation? We both burst out laughing, and couldn’t stop. One of the guests at the reception even came over to where we were still standing convulsed in the doorway to ask if we were alright.

Toni’s assessment was that the incident looked just as funny from her perspective. Too bad we didn’t have a video to post somewhere. 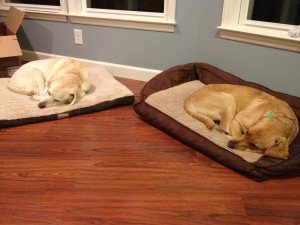 As sweet as C.J. was, she was also full of surprises. At our first book club meeting at Rita’s house, C.J., Ramsee and Tamara’s German Shepherd, Austin were out of harness and amusing themselves. Suddenly, we heard a long low growl. No, it wasn’t 80-pound Ramsee, who’s turf it was, and it wasn’t Austin, who had the definite size advantage. It was my little 60-pound C.J., letting her friends know that the Nyla bones were hers, until she decided she was done with them.

Therefore, it was no surprise that when I brought Otto home to New Bern, my girl wasted no time letting him know who was boss. C.J. had her own bed, and we bought a new one for Otto. Well, the princess decided that she liked Otto’s better, so she would walk over to where he was settled down for the night and bark once. If that didn’t get the desired result, she would bark again, and Otto would obediently get up and let her have her way. As time went by, all C.J. had to do was walk over to Otto’s bed and give him the “the look”. “The Look” was all it took, and Otto was up and over to the other bed.

Our Life on Six Legs

C.J. was a born traveler. Although her Puppy Raisers, Mary and Henry Erith, never had her on a plane, C.J. got on the plane with me in Bradenton, FL to go home to Atlanta as if she had been flying all her life. Other than one quizzical raise of her head upon take-off, she lay still at my feet the entire flight. The head rub I gave her as reassurance that everything was fine ended up lasting a lifetime. 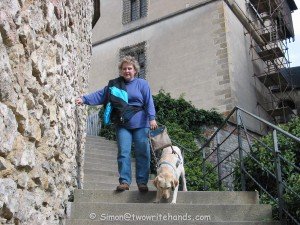 CJ in the Czech Republic

When Simon and I planned a trip to the Czech Republic, Tuscany and Switzerland in 2003 for our 25th anniversary, we wondered how C.J. would do. Well, we needn’t have worried.

Despite the long flight from Atlanta to Amsterdam C.J. slept all the way with no discomfort. In fact, when two passenger service agents met us and took C.J. and me outside to relieve her before catching our connecting flight to Prague, I had to coax the princess to do her thing on a wet patch of grass.

After giving her her first food and water since early the day before, the two agents, C.J. and I boarded an electric golf cart driven by another agent, and made our way to our departure gate. Simon was already there, and when we came into view, it looked as though my pooch and I were celebrities arriving with our very own entourage. Well, C.J. deserved no less. 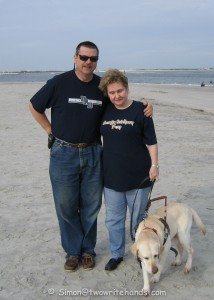 C.J. always knew when we were about to go on a trip by the navy L.L. Bean carry-on bag that I take everywhere we travel. Memorial Day weekend, 2001, we were headed to New Bern to visit friends, and she saw me packing the bag. When Simon picked it up, she followed him down the hall, into the garage, and hopped into the back of the station wagon immediately after Simon put the bag in. That was my C.J.. Always ready to travel.

There are so many C.J. stories I could tell, but the internet isn’t big enough. Fortunately, my mind and heart are. I will always love and miss my princess, and will always be grateful for the treasure of her presence in my life. If there is a heaven, I know C.J. is there, and she’s probably reminding Austin who’s boss.