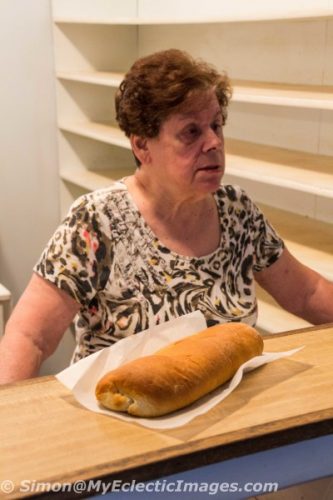 The Accidental Baker and Her Scrumptious Accomplishments.

If not for the sign, you might mistake the bakery for another house on a residential street in Middle Amana. But Hahn’s Hearth Oven Bakery, it’s history, the baked goods that emerge from it’s brick oven and the talented woman who produces them are nothing short of WOW!

The Amana Colonies consist of seven communities – Middle Amana being one – connected by common history, tradition and values. In September, 2015, Simon, Otto and I spent two days discovering the treasures that abound in this unique section of southern Iowa, Hahn’s Bakery being the “Hahn’s-down” most delicious.

Doris Hahn, who’s late husband’s family took over the original bakery in 1927, has been turning out fresh breads, coffee cakes and cinnamon rolls for the last 51 years. But Doris was not born to baking. “I had never baked a loaf in my life,” she recalled. That was until the day before OktoberFest, when her father-in-law, who had a heart condition, asked her to take over the baking.

Despite her lack of experience, not to mention the abysmal timing of her father-in-law’s request, Doris soon made friends with the original brick oven, capacity 140 loaves, and the time-honored German recipes and techniques that had once helped supply nine communal kitchens, feeding 40 people each, with their daily bread.

The night before we met Doris, she had begun the baking process at midnight in preparation for the next morning’s onslaught of hungry locals and tourists. 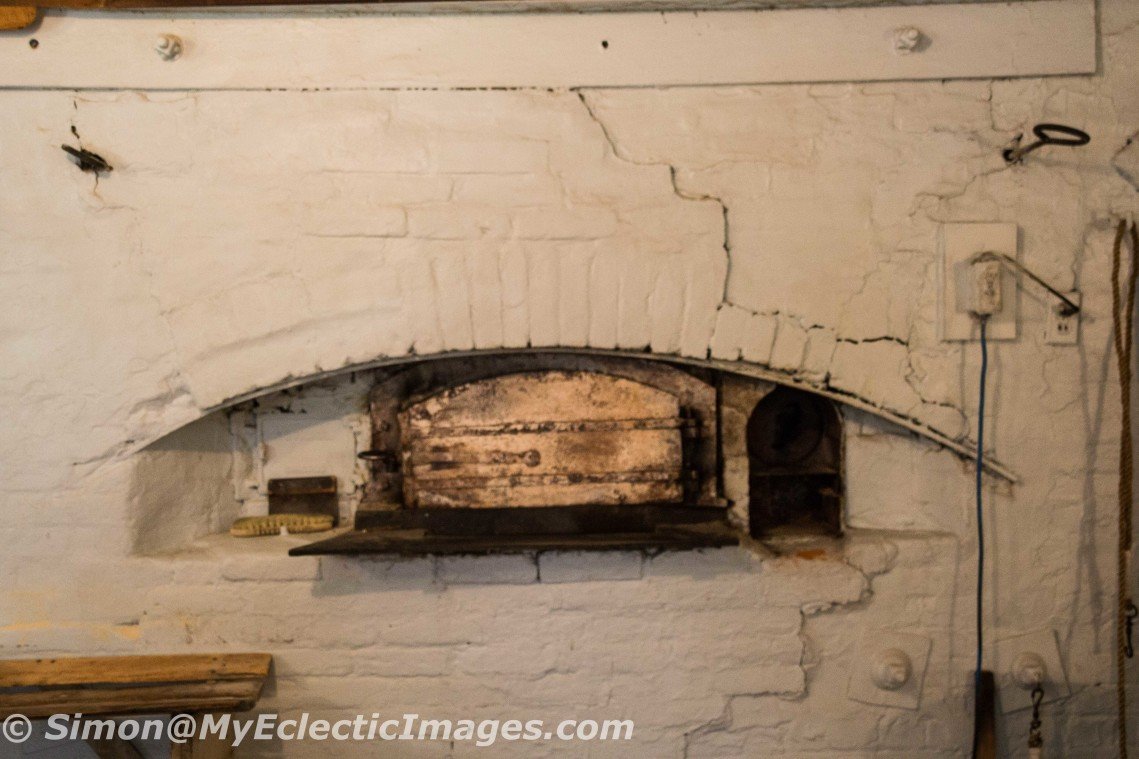 Each evening, Doris’s first act is to start heating the oven, which takes two hours. Meanwhile, she mixes the bread dough for wheat and rye loaves, as well as the sweet dough for the coffee cakes and cinnamon rolls. Doris uses an industrial grade mixer that mixes and kneads 30 pounds of dough at a time. Before the mixer was purchased in 1961, this part of the process was done entirely by hand.

Once the mixer has done its job, the dough is allowed to rise for an hour. Then Doris cuts out loaves, coffee cakes and cinnamon rolls by hand in preparation for baking. In all, she prepares three batches of dough nightly, and five on Fridays.

All the baking is completed by 6:00 AM, and then the stampede begins. Although the official opening time is 7:00, a line begins to form outside the door as the loaves are removed from the oven. “It doesn’t do me any good to have a sign,” Doris said, chuckling, “they open me up”.

If you want to be assured of of a loaf or morning treat, you will need to call in your order the day before. Doris bases the number and types of items she bakes on the orders she receives. The good news is that she will always make a little extra for drop-ins. Be aware, however, that by 9:00 AM, there is not a crumb to be found. The morning we visited Doris, she had been cleaned out by 8:45.

Doris bakes all her breads and pastries in the original stone hearth that has been a part of the building since it was constructed in 1864. Until the early 1930s, when the Amana Colonies elected to transfer from a communal society to a more capitalistic way of life, each village had bakeries to produce the bread for its inhabitants. Middle Amana had nine kitchens supplied by two bakeries, of which Hahn’s was one.

Processed flour for the Colonies came from two large grist mills, located in Amana and West Amana. The mills were of great importance, as there were no others closer than Cedar Rapids and Iowa City to the east, or 50 miles west towards Des Moines.

The oven was originally wood-fired, but has been running on propane since 1985. According to Doris, there is no difference in flavor or timing from the days when the oven was fueled with wood. 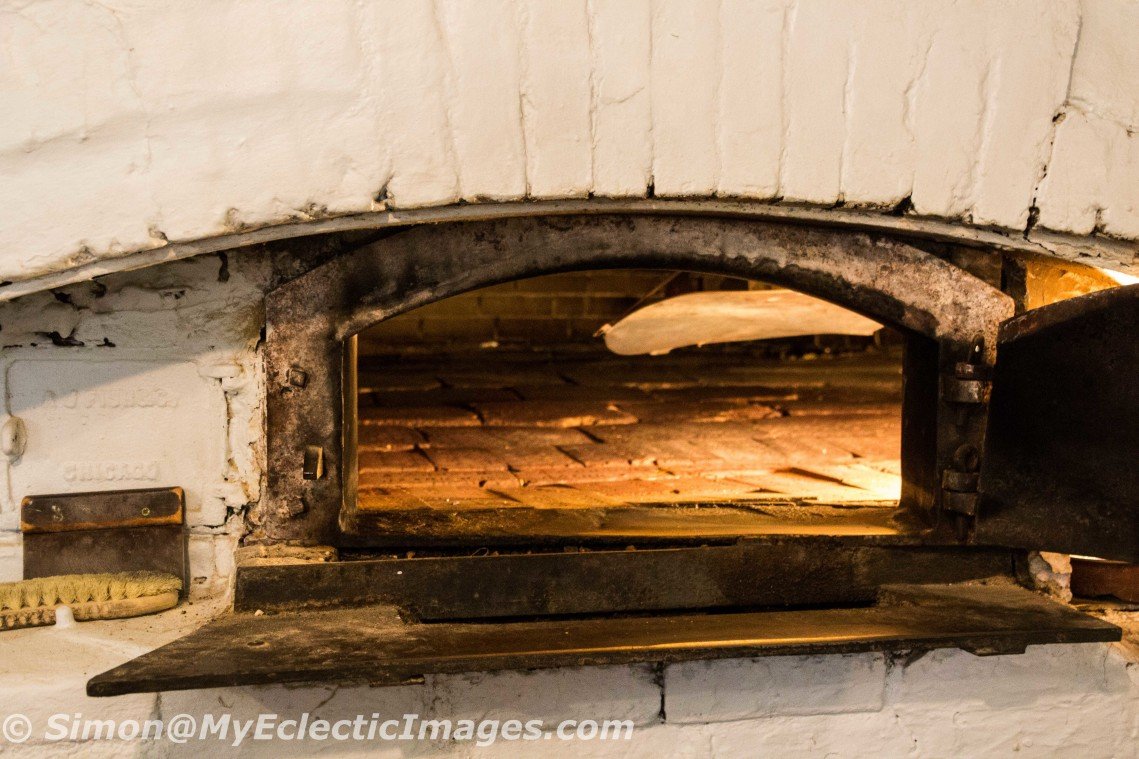 Looking Inside the Brick Oven at Hahn’s Bakery

In 1970, Doris’s husband, Jack, rebuilt the roof of the oven, because the old bricks were at the point of falling down. This was no easy DIY job, as both the roof and floor of the oven are comprised of seven layers of brick and sand. Doris is able to turn off the propane after the two-hour heating period, because the heat from the brick is enough to bake the bread.

Although the Amana people came from Germany to escape religious persecution, they are very different from the Amish and Mennonites in several respects. The most striking is that they have always embraced technology and devices that make their lives and working conditions easier. Despite the modern trappings, however, traditional values and pride in what they produce make the Amana Colonies unique.

Doris may enjoy the convenience of propane and a heavy-duty mixer, but she draws the line when it comes to compromising the quality of her products. When salesmen try to persuade her to use frozen bread dough, she steadfastly refuses. Nor will she use any kind of preservative. Besides, who needs preservatives when most of the baked goods are devoured before the end of the day?

Also, Doris always purchases her flour from the same company in Wisconsin. “If it works,” she contends, “you don’t want to change it .”

When I asked Doris what is the biggest mistake bakers make, she didn’t hesitate. “Not using the right temperature of water or milk.” The liquid needs to be lukewarm. Too hot, and it kills the yeast. Too cold and it kills the yeast. So what is the correct temperature? Doris has no idea. She tests a drop on her wrist, and if it feels right, she uses it.

Our fascinating visit with Doris ended far too soon, but having been told we were coming, she sent us off with a parting gift of two cinnamon rolls she had stashed away just for us. Now, forget about those enormous, obscene, balls of yuck that are drenched in so much sickly sweet icing that just looking at them is enough to give you cavities. These rolls were delicate and actually tasted of cinnamon. Also, eating one doesn’t make you feel as if you had just swallowed a bowling ball. The experience was WOW down to the last exquisite bite. It was so good, in fact, we came back the next day and bought a cherry coffee cake for later snacking, and were WOWed all over again.

When you visit the Amana Colonies, as I believe you definitely should, make sure you place an order with Doris. You won’t regret it.