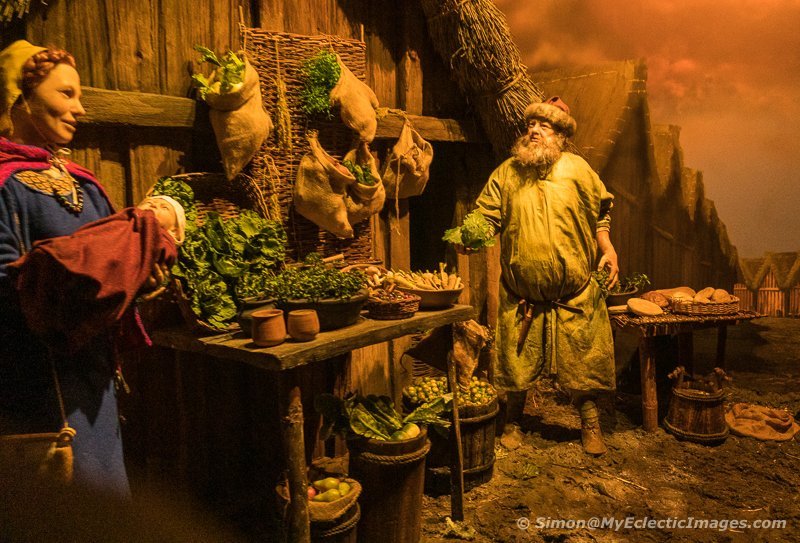 Where modern technology brings the past into the present

York, England is one of my favorite places to visit. Not only because my sister-in-law and her husband live there, but because the city consists of layer upon layer of history. One of these fascinating layers is comprised of remnants of the Viking era, 800 – 1050 AD, and the absolute best place to immerse oneself in Viking history in York is the JORVIK Viking Center.

I had wanted to visit the JORVIK Viking Center every time we were in York but never got around to it. In 2018, though, the right time rolled around both figuratively and literally. Since I had broken my leg in Spain two weeks prior, we were forced to take wheelchair accessibility into consideration as a practical matter. Fortunately, JORVIK Viking Center was, and always has been, wheelchair accessible.

Simon, Otto, my sister-in-law, her husband, and I arrived at JORVIK on a dull day, but there was nothing dull about what was inside the center. Built on the site of the monumental Coppergate archaeological dig, the JORVIK Viking Center entertains and educates by accurately recreating life in York during the 10th century.

The first thing that struck me upon entering JORVIK was the staff’s immediate attention to my accessibility needs. I was notified that a Braille or large print guide was available if I wanted one, and was assured that JORVIK had a wheelchair accessible capsule for the ride into the past, along with headphones so I could listen to an audio descriptive track throughout the ride. Talk about a double dose of accessibility. I was definitely impressed, and we hadn’t even begun our tour.

Our Viking experience began with a downward elevator ride. The door opened on to a  room with a glass floor covering most of the area. Below lay a section of the original archaeological site and some of the artifacts found there.

Guides in period attire were everywhere eager to help and inform. A guide introduced me to replicas of artifacts that I could touch and handle. One was a piece of wool cloth woven on a replica of a loom, parts of which were found during the dig. The wool had been woven and dyed in accordance with information gleaned from Viking artifacts. She also showed me a metal knife, glass beads an intricately tooled  belt buckle worn by Viking men, and a large broach used by women to fasten clothing. The buckle and broach were originally fashioned out of silver, but – to keep costs down – the replicas were made from pewter.

When it came to our turn to take the ride through the digital recreation of York in the late 900’s, we were ushered to the platform where capsule passengers disembark, because it allowed more room for maneuvering my wheelchair. The capsule was designed specifically to carry a person in a wheelchair, and it was obvious that the guide handling the process of safely inserting Otto, my chair, and me into the capsule had done this a time or two.

The guide strapped my chair into the front section of the capsule. My sister-in-law settled into the section behind me, and we were off to the reconstruction of the city. As we moved, the headphones the guide had handed me provided a running descriptive narrative. This partially blocked the sounds of activity and digital inhabitants speaking in Norse and Old English, but the authentic smells came through clearly enough. They weren’t all pleasant but moved and changed with the sounds of the action as in a well-choreographed sensory dance.

What you see as the capsule moves through the 10th-century city is a historical interpretation of life, based on archaeological findings onsite. During the Viking era, York was a melting pot of cultures, occupations, languages, and beliefs. It was a busy and prosperous trading center whose inhabitants came from Britain, Scandinavia, and as far away as the Middle East.

JORVIK Viking Center uses state-of-the-art animatronics technology to bring the people of York to life. Facial features, clothing, and other details have been painstakingly researched, so the people, animals, and scenery you see, hear, and smell are as authentic as it gets.

During our trip into the past, we met a tattooed hunter and his dog, an Arab trader, a slave trader and slave, a priest, and many more. The woman with the crutch was especially interesting because we had seen her skeleton earlier on in our JORVIK visit. She had been born with a hip defect, which in today’s world, would have been corrected early in her life.

The Coppergate excavation where JORVIK now stands was the site of a chocolate factory that had been demolished. A survey of the land turned up artifacts from the 10th century, and a new archaeological dig commenced.

The bulk of the excavation took place between 1976 and 1981. The archaeologists from York Archaeological Trust, as well as participants from around the globe, worked to unearth the artifacts, houses, workshops, and backyards that told a detailed story of 10th century York.

By 1981, the Coppergate dig had been completed. And a mere three years later, on April 14, 1984, JORVIK Viking Center opened to the public. But neither the ride nor the layout was anything like what you will see today.

In 2001, advances in science and research made it necessary to give JORVIK a major facelift. The new and improved version made the most of technology and available information, taking visitors on a ride in a time machine that whisked passengers into the past and deposited them at the original excavation before returning to real-time.

JORVIK’s popularity among locals and tourists alike increased over the years, but in December 2015, the center was heavily damaged during a catastrophic flood. The precious artifacts were taken to safety, but the center was closed for over a year for renovation. Not to be deterred from its mission to bring the Viking experience alive through education and entertainment, JORVIK created a series of special exhibitions throughout York.

On April 8, 2017, JORVIK reopened its newer and even more improved center. Our experience was the result of decades of digging, deciphering, research, imagination, and planning. The result was a family-friendly attraction that is as beautifully presented as it is unique.

Emerging from our ride through 10th century York, we perused the artifacts on display in glass cases in the gallery. It gave me a bit of a jolt to realize that these items were 1,000 years old, and had been part of everyday life for a population long gone.

Cooking utensils, jewelry, and clothing represented daily life for Viking families, but more than material possessions were unearth during the Coppergate dig. Thanks to advances in science, skeletons, in various stages of intactness, revealed their gender, origin, and age and manner of death. They also revealed diseases and traumas during life, such as dental abscesses.

A petrified lump of human feces contained equally petrified worm eggs, probably caused by contaminated food or water. But such samples also indicated that despite the presence of worms, Vikings of the day consumed a generally healthy diet.

A guide invited me to handle replicas of silver period coins. Some were engraved with Christian and Norse symbols on the same surface, suggesting an atmosphere of tolerance in 10th century York. Archaeologists had located the original dies used to produce the local currency, making replicas relatively simple to produce.

In fact, everything, real and recreated, at JORVIK is based on archaeological evidence taken from the Coppergate excavation. The attention to authenticity and detail is truly worthy of admiration and respect.

Our visit to JORVIK Viking Center came to an end all too soon. But for a short while, we had gone back 1,000 years. And although it was necessary to return to the realities of the present, our JORVIK experience had taught us much about the people who once populated one of York’s fascinating layers.

You can expect your visit to JORVIK to last around one hour.

Other pricing options are available for tickets that provide entry to other area attractions too. Be sure to check out the JORVIK website.

All aspects of the JORVIK Viking center, including access to the ride, are fully accessible for people in wheelchairs. Also, special provisions are made for people with hearing and vision impairments, people with autism, people with asthma, and families with small children.

Wheelchair and mobility scooter users are asked to make reservations in advance. Call 01904 615505 or email groups@yorkat.co.uk to make a reservation.

Visitors with disabilities or additional access needs do not have to wait in line.

Disclosure: Our Viking experience was generously hosted by JORVIK Viking Center. However, all opinions, as always, are entirely my own.