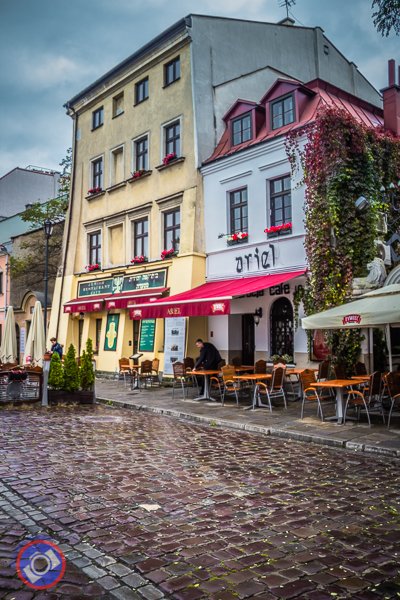 Where Turbulent History, a Fire-Breathing Dragon, and Perfect Pierogi Converge

Part I: The Jews of Krakow

My memories of Krakow never fails to arouse in me an intensity that refuses to fade with time. Much of her complex history is tragic and bloodstained. Nevertheless, the courage, resourcefulness, and talent of her people insured she would prevail. Today, Krakow is vibrant, friendly, affordable, and a true joy to visit.

Krakow lies in Southern Poland, bordered by Slovakia, Czech Republic, and Ukraine. Once the Polish capital, this jewel of a city is a multi-faceted destination. She serves up an irresistible buffet of history, architecture, art, and culture. Once you’ve taken a taste of what Krakow has to offer, you’ll want to come back again and again to sample more.

Simon, Otto and I had the privilege of spending four days in and around Krakow, We began with a private tour arranged for us by our host, Krakow Promotion and Tourism Department. Jola was our guide, and for three hours, she kept us engaged throughout a fascinating and comprehensive overview of the city. We found Jola’s knowledge and insights invaluable over the next three days. I recommend a guided tour as a start to a Krakow visit. It will heighten your understanding of what makes Krakow so impressive.

Because Krakow has so many stories to tell, I will tell it in two parts. The city’s once thriving Jewish community dates back to the early 13th century. This post will introduce you to Jewish life in Krakow, past and present.

During our Krakow visit, the Galaxy Hotel was our cheery and comfortable home base. The location was within walking distance of Kazimierz. This area was once a separate municipality from Krakow, with Christian and Jewish communities living peacefully side by side.

This section of Krakow was built by, and named for, King Kazimierz III the Great. From the 13th century on, Jews steadily moved into Kazimierz where they could escape persecution in other parts of Europe. The city was a safe haven until September, 1939, when the Nazis invaded and subjugated Poland. At the time, there were approximately 70,000 Jews living in Kazimierz. Approximately 5,000 were in residence five years after the Soviets rolled in to finish what the Nazis had begun. Persecution, destructive raids and murders drove the majority of the Jewish population to emigrate to Israel and other parts of Europe. Today, there are fewer than 200 remaining in Krakow. Once the largest Jewish community in Poland, it is now the smallest.

What to See in Kazimierz

Unlike Warsaw,, which had been bombed into near extinction by the end of World War II, Krakow survived with most of its medieval and renaissance structures intact. Kazimierz is now a trendy, artsy neighborhood with shops, restaurants, museums, and art galleries. Despite this, remnants of its Jewish roots remain. A wander along Kazimierz’s 16th century cobblestone streets yields rich rewards for history buffs, the architecturally inclined, and foodies. Here are a few of the treasures waiting to be discovered:

Although the Jewish population of Krakow is small, the popularity of traditional Jewish food isn’t. In Kazimierz you’ll find an assortment of cafes and restaurants offering big flavor.

Klezmer Hois – the site of the collapsed Mikva – offers up traditional Ashkenazi cuisine such as broth with kreplach (soup dumplings stuffed with meat), along with traditional folk music. Ariel is the oldest Jewish-style restaurant in, Kazimierz. Paintings of rabbis cover the walls, and an assortment of tchotchkes are available for purchase along with the food. If I wanted to relive my childhood, Kazimierz is where I would go to find knishes, and cholent (a stew of beef, barley, potatoes, and dried beans). As it happened, cholent wasn’t something I ever wanted to relive. I do regret not making time to indulge in a piece of chocolate babka, though.

The beloved bagel can be found just about everywhere, but Krakow can lay claim to the first reference to this iconic Jewish gem. In 1610 the records of the Jewish community of Krakow make mention that the illustrious bagel was given as a gift to women about to pop out another bagel lover.

The Seven Synagogues of Kazimierz

At the outbreak of World War II, Krakow was home to approximately 90 synagogues. Today, only seven remain and of these, only four function as houses of worship.

It was a common operating procedure for Nazi occupiers to immediately set fire to the synagogues. This tactic simultaneously demoralized the Jewish population and deprived them of the heart of their community. In Krakow, the Nazis had a field day. What they didn’t destroy outright, they pillaged, then used the empty structures to store ammunition. Despite this, the handful of historic synagogues remaining in Kazimierz represent survival at the same time as they bear witness to the near destruction of the district’s Jewish community.

The Jewish Experience Beyond Kazimierz

In 1941, The Nazis forcibly relocated the entire Jewish population of Kazimierz, confiscating most of their belongings. Armed Nazi soldiers herded them across the Wisla River to the Podgórze District, which was closed off to become the Krakow Ghetto.

The horrors of the ghetto are recognized and memorialized in Ghetto Heroes Square. Originally known as Zgody Square, this expansive open area was the only place where the ghetto prisoners could find a little space and fresh air. They lived four families to an apartment, starvation and disease ran rampant, and there was nowhere to go except the square.

In 1943, the Nazis liquidated the ghetto. They utilized the square as the location to sort which prisoners were fit enough to transport to labor camps, which ones would go directly to death camps, and which ones they could shoot on the spot for the hell of it. Most of the Krakow Ghetto prisoners perished in the nearby extermination camps of Bełżec, Płaszów and Auschwitz.

In the blink of an eye, no known Jews lived in Krakow, with the exception of the 1,200 who worked in Oscar Schindler’s enamel factory.

The most haunting site in Ghetto Heroes Square is the Empty Chairs Memorial. It consists of 70 bronze and iron chairs, each representing 1,000 Krakow Jews whom the Nazis murdered.

Before Krakow’s Jews could be rounded up and confined in the ghetto, The non-Jewish residents of Podgórze were forced to leave. Only Jews were allowed to live there, with the exception of a Christian named Tadeusz Pankiewicz. He owned the Eagle Pharmacy, and at great risk to his own life, assisted Jews in many ways: procuring medicine, smuggling food and clothing into the ghetto, administering sedatives to children to keep them asleep while in hiding from the Nazis. This man did what he could to help as many Jews as possible escape deportation.

It was only fitting that in 1983, Tadeusz Pankiewiczthe received the medal of the Righteous Among the Nations. This is one of the highest honors the State of Israel bestows upon non-Jews who risked everything to save Jewish lives during the Holocaust.

Today, Tadeusz Pankiewicz’s pharmacy operates as a museum. depicting life in the ghetto, including documents, testimonials, and artifacts. It will cost you 11 złoty (approx. $2.80) to visit The pharmacy, but the experience will be priceless.

Oskar Schindler may not have been a saint in the traditional sense, but to the Jews he saved from certain death, he performed 1,200 miracles.

Schindler was a member of the Nazi party, but he was also a businessman. He began employing Jews as cheap labor, but once he understood the horrific conditions under which Jews lived and died, he was determined to save as many as he could. Not only did he employ able-bodied men, but women, children, and the elderly.

So determined was Schindler to make a difference, he eventually drove himself into bankruptcy. He purchased life-saving supplies on the black market, and payed bribes to corrupt Nazi officials for the benefit of his workers.

Oscar Schindler died penniless in Germany in 1974. He and his wife are buried in the Protestant Cemetery in Jerusalem, In 1993, the couple was designated Righteous Among the Nations. Schindler was the sole Nazi Party member to receive this honor, Oscar Schindler may be dead, but his legacy lives on.

The factory where Schindler’s life-saving acts of courage and compassion took place is now a museum. Interactive exhibits tell the story of Krakow during the unspeakably brutal Nazi Occupation. The museum also delves into the lives of Oscar Schindler and the Jews who lived because of his decision to do what was right.

The Nazis didn’t invent anti-semitism. It has been around as long as there have been Jews on the planet.

During the 1930s, Europe saw a gradual rise in hate and violence against Jews, but nothing prepared the continent for the firestorm of murder and insanity Germany unleashed. The Jewish population of Poland was almost completely destroyed. Out of the 3.5 million living in Poland in 1939, 90% were murdered by the Nazis.

In Krakow and nearby Auschwitz/Birkenau, The past has been carefully and reverently preserved. I highly recommend a visit to Krakow to get in touch with the many facets of her history and get to know the fine people who call Krakow home.

In Part II of “K” if for Krakow, I’ll share with you our experiences beyond Kazimierz. You’ll meet a fire-breathing dragon, learn where to get the best pierogi, and dig deep into the city’s history.

Disclosure: Our visit to Krakow was generously hosted by the Municipality of Krakow, Promotion and Tourism Department, and the Polish National Tourist Office. However, all opinions, as always, are entirely my own.