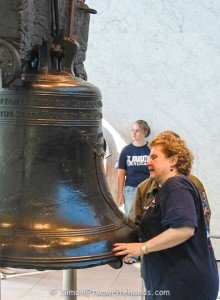 As my fingers explored the cool, smooth metal, the engraved letters and the famous crack of the Liberty Bell, the only word my stunned brain could produce was”wow!”

Although the world is full of marvelous things we’re not allowed to touch. I sometimes, get a pass.

On a Saturday morning in early September, 2005, I experienced a true “WOW!” moment at Liberty Bell Center in Philadelphia. It was there that I had the privilege of getting up close and personal with one of America’s most enduring symbols of freedom.

Simon, Kevin, C.J. and I were on our way to New York by car, when we found ourselves with a morning’s worth of exploration in Philadelphia. A visit to the Liberty Bell was a no-brainer.

The first thing that impressed me was that information was made available to me in Braille. So, Braille brochure in hand, I decided to push the envelope.

“Would it be possible for me to touch the Liberty Bell,” I asked the kind-sounding lady behind the counter.

“Of course,” she said, almost making me drop my brochure. “I’ll take you right now.”

With that, she escorted me into the roped-off area where the bell is displayed.

“Take your time,” my escort said. And with that, she stepped back to allow me to commune with an icon that was cast over two centuries ago, and which has become a symbol used by both anti-slavery groups and suffragettes to rally supporters to their causes.

The bell was commissioned by the Pennsylvania Assembly in 1751, in honor of the 50th anniversary of William Penn’s Charter of Privileges, the colony’s original constitution. There are three engravings on the Liberty Bell:, “Proclaim liberty throughout all the land unto all inhabitants thereof,” from Leviticus 25:10; “By order of the Assembly of the Province of Pensylvania for the State House in .” (spelled as it appears);“Pass and Stow/MDCCLIII” (the names of Philadelphia’s founders, along with the date, 1753.

Contrary to traditional belief, it is unlikely that the Liberty Bell rang out on July 8, 1776 to call the citizens of Philadelphia to hear the first reading of the Declaration of Independence. Historians now believe that the State House steeple, where the bell was housed, was in a serious state of disrepair at that time.

I’ll spare you my rant on how we’ve allowed so many of our original freedoms to be modified, diluted, or completely taken away. I’ll even spare you a history lesson. To learn more about one of our nations mega-WOWs, here’s a link to a website with all kinds of interesting facts: http://www.ushistory.org/libertybell/index.html