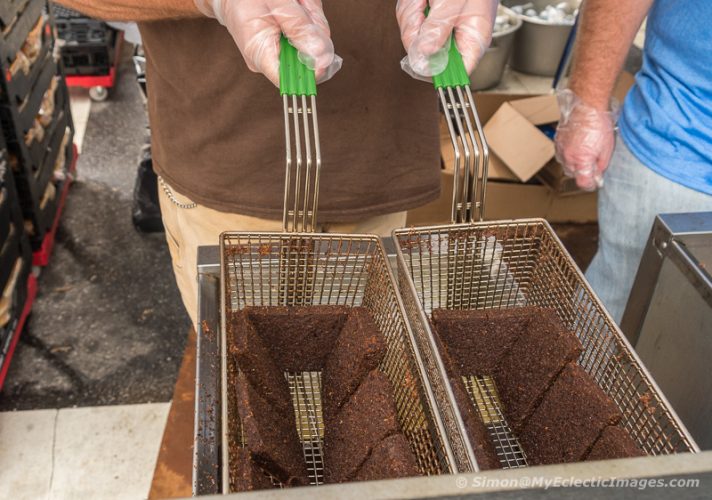 How Could Something that Sounds as Nasty as Liver Mush Taste So Good?

The intoxicating aroma of frying food, a tuxedo-clad dog walking placidly by its human’s side, music and laughter everywhere, and lines of hungry festival goers waiting for their taste of gastronomic nirvana piedmont style. This was the warm welcome that embraced our senses at the 2018 Shelby, North Carolina Liver Mush Festival.

My husband and I had spent the previous evening at the Brew Fest and Rotary Chili Cook-Off sampling creative takes on chili and washing them down with equal amounts of ice cold North Carolina craft beers. And now, we were preparing to try the local speciality, liver mush.

Set Up for the Brew Fest and Rotary Chili Cook-Off in Shelby, NC (©simon@myeclecticimages.com)

What is Liver Mush?

Liver mush is a combination of boiled pig’s head meat and ground up pig’s liver, cornmeal, seasoned with sage, black pepper, red pepper, and salt. It’s seasoning is similar to sausage, but that’s where the similarity ends. Instead of links or patties, the concoction is pressed into a loaf for slicing. It’s fully cooked and ready to eat, but is best fried to a crunchy crispness. The liver mush has a subtle liver flavor that is not at all overwhelming, and we found our first experience with this Shelby heritage food to be surprisingly tasty.

A Block of Liver Mush being Sliced for the Frier in Shelby, NC (©simon@myeclecticimages.com)

While we were at the Liver Mush Festival, we sought out the local expert on the subject, Ron McKee, owner of Mack’s Livermush. He and his employees were frantically cutting slices from loaves of this “delicacy”, deep frying them, placing them on buns, and selling them to a horde of  devotees. Ron was kind enough to break away for a few moments to give us the liver mush low-down.

Ron McKee, Whose Grandfather Created the Market for Liver Mush During the Depression (©simon@myeclecticimages.com)

Ron’s grandfather began selling liver mush in 1933 during the darkest days of the depression. People were hungry, and this concoction was an inexpensive way to use less desirable parts of the pig. Then, in 1985, Ron’s father decided his Piedmont comfort food needed to be celebrated, and the Liver Mush Festival was born. By 2008 2,000 attendees flocked to the festival, and by 2017, the number had risen to over 16,000.

How Do You Eat Liver Mush?

The traditional way to eat liver mush is deep fried, on a bun or white bread, and slathered with mayo, mustard, or grape jelly. It is also scrumptious under spicy salsa or Charlotte’s comfort food, pimento cheese. It is eaten as an accompaniment for eggs, a filling for quiche, and as a pizza topping. We even found some floating around in a couple of the chilis we sampled the previous evening.

Aside from it’s flavor, liver mush is 99 per cent fat free and gluten free. Whether or not this puts it in the healthy eating category, the folks in and around Shelby love it. Liver mush is sold within a 100 mile radius of Shelby, and most people have never heard of it. Despite this, Mack’s produces and sells between 60,000 and 80,000 pounds a month. That’s a lot of luscious liver mush.

A Fun and Frolicking Family Festival

Our day at the Liver Mush Festival was like a journey back to a simpler time. No one seemed to be in a bad mood, children laughed and played as if they didn’t have a care in the world, and approximately 200 dogs – in costume or naked – wagged, woofed, and wandered to the delight of everyone.

There was no shortage of liver mush to be enjoyed. With three vendors, original offerings such as freshly made liver mush waffles with pimento cheese, liver mush quiche, and a liver mush recipe contest. We could see no danger of this well running dry.

Liver mush was taken to the limit with eating competitions held throughout the day. We learned that contestants train all year for this event. Now, that’s what I call serious devotion.

A Little Miss Liver Mush pageant, canine demonstrations, and a parade of costumed dogs were also big hits with festival goers. By the time we left, my face hurt from smiling. I would definitely do this again.

What to Do in Shelby Besides Eat

Shelby lies 45 miles west of Charlotte. It is a small, friendly North Carolina Piedmont town of just over 20,000 residents. Shelby welcomes visitors with surprisingly wide streets, a big heart, and plenty to do. Here are a few activities to check out once you’ve had your fill of liver mush.

Information on these and more things to do in Shelby can be found on the town’s website.

The 2019 Liver Mush Festival, Mush, Music and Mutts will be a two-day event beginning with the Brew Fest and Rotary Chili Cook-Off on Friday, evening, October 18. from 6:00pm to 9:30 pm. This outdoor family and dog friendly event will feature beer, chili and live music

The Liver Mush Festival will kick off on Saturday morning October 19 at 8am. The Kids Zone will keep the little ones entertained with such activities as pumpkin painting and games. They can also burn off some energy bouncing around in an inflatable castle, and sliding down an enormous inflatable slide. Scheduled throughout the day will be traditional festival events including the Little Miss Liver Mush Pageant, the liver mush recipe contest, and a parade of dogs in costume, plus a few surprises. Live music at several venues will keep everyone in an upbeat mood, and there will be copious amounts of liver mush to be enjoyed. Admission is free thanks to sponsorships courtesy of area businesses.

More information and Friday night ticket prices can be found on the festival website.