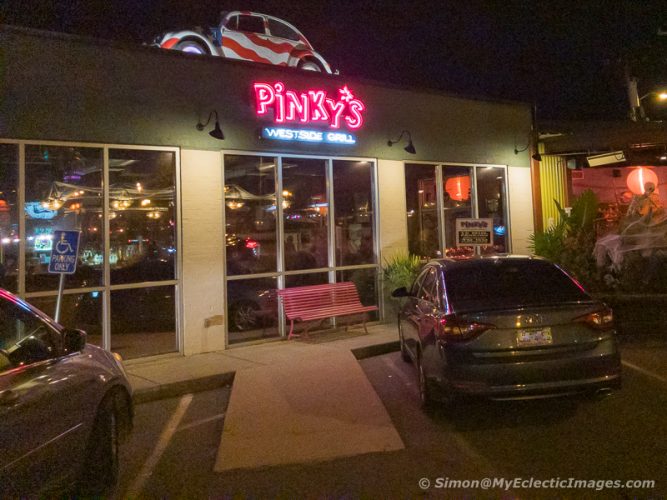 This Tasty Spread is Northern Grown but Southern Owned.

We thought we knew Charlotte, North Carolina, well. After all, our eldest son lives there. But in our never-ending quest to always look for the surprises, we came face-to-face with Charlotteans’ shameless obsession with a substance known as pimento cheese.

I first made the acquaintance of pimento cheese in 1980, shortly after Simon and I moved from Montreal to Knoxville, Tennessee. A friend took me to lunch and pimento cheese was one of the options on the sandwich menu.

“What’s that,” I asked. I had never heard of pimento cheese.

From then on, pimento cheese was an occasional treat to be slathered on bread and consumed accompanied by appreciative murmurs. But, on our most recent visit to Charlotte, our eyes were opened to this scrumptious spread’s possibilities. And we have the good, creative, pimento cheese loving people of the Queen City to thank.

What Is Pimento Cheese?

Psssst. Don’t tell the folks down South, but pimento cheese has its roots up North as far back as the late 1800s to early 1900s. A 1908 edition of Good Housekeeping Magazine featured an early version of a pimento cheese sandwich filling consisting of cream cheese, mustard, chives, and minced pimento.

By 1910, commercially made pimento cheese began appearing in stores. And when Georgia farmers started growing and canning pimentos, the cheese spread began its evolution as a Southern staple.

Today, you can throw together a batch of basic pimento cheese by combining three simple ingredients: shredded sharp cheddar, mayonnaise and finely chopped pimentos. Stir in tabasco sauce to taste, and there you have it. Or do you?

A Batch of Freshly Made Pimento Cheese (©simon@myeclecticimages.com)

The above may have been my introduction to pimento cheese back in Knoxville, but producers and restaurateurs who make their own would turn their noses up at such a simplistic presentation of a product that is often referred to as Southern caviar. The sandwich spread that once fed hungry mill workers in the Piedmont has been elevated to new heights of deliciousness in sophisticated cities such as Charlotte.

If you’re still not taking the Charlotte pimento cheese phenomenon seriously, consider this. In 2010, Emily Wallace, a graduate student at The University of North Carolina at Chapel Hill, wrote her thesis on – you guessed it – pimento cheese, and its evolution from humble sandwich filling to Southern food icon. One of her findings was that 80 percent of all pimento cheese is sold in the Southeast. According to Wallace, Charlotte was one of two of the largest markets. The other was the area encompassing North Carolina’s capital of Raleigh.

In March, 2014, John Morgan, a Charlotte native, former elementary school art teacher and Jeopardy money winner, founded Queen Charlotte’s Pimento Cheese. The company’s output is approximately 100,000 pounds a year, but everything from the gluten-and preservative free pimento cheese to the packaging, labeling and delivery, is handmade and accomplished by John and his seven employees. “It’s as handcrafted as it gets,” he said. “We don’t know how to do it any other way.”

We watched as John grated cheese and mixed ingredients in an enormous 30 quart mixer. I asked how long it took to prepare and package the pimento cheese. “It’s made today, delivered tomorrow,” he replied. And when I asked why pimento cheese inspires so much passion and creativity in Charlotte, John simply answered, “We want to be the beating heart of the pimento cheese universe.”

You can learn more about Queen Charlotte’s Pimento Cheese or place an online order at: http://www.qccheese.com

Where Can You Eat Pimento Cheese in Charlotte?

The answer is just about everywhere. Many restaurants and bars make their own pimento cheese and serve it in omelets, on burgers, and as part of decadent BLTs. Sadly, we didn’t have enough time on our last visit to Charlotte to sample more than three pimento cheese delights, but they introduced us to new flavor combinations, and made the ordinary extraordinary.

This burger joint is popular in both its locations. They do a variety of burgers, sandwiches and a few other offering. But we were there for the Pimento Cheese Burger on a better-than-usual bun with fried pickles. The robust beef and tangy, crunchy pickle supplied an ideal foundation for the luscious homemade pimento cheese.

The Menu Board at Bang Bang Burgers (©simon@myeclecticimages.com)

This casual eatery can be found in three locations throughout Charlotte. With an impressive selection of beers and creatively named and executed breakfast items, soups, salads and sandwiches, there’s no such thing as same old, same old. But further exploration of the menu will have to wait. We were in search of a sandwich made with the Common Market’s award-winning pimento cheese. There was a choice of breads, so Simon opted for a multi-grain and I chose deli rye. You can have your sandwich hot or cold, which was a no-brainer. The sandwiches were freshly made with the bread toasted and the pimento cheese all soft and melty. And that was just the texture. The cheese had a gentle kick that heightened the flavor of the concoction.

A Pimento Cheese Sandwich at the Common Market (©simon@myeclecticimages.com)

Pinky’s serves up a respectable assortment of burgers, dogs, sandwiches and such, but we were on a mission to try their Pimp’n Fries. Pinky’s is another Charlotte establishment that makes its own pimento cheese. Their claim to pimento cheese fame? They melt the cheese over seasoned waffle fries. The marriage of crunchy fries and smooth pimento cheese is an experience your arteries may not appreciate, but the rest of you most certainly will. You can also elect to top your Pimp’n Fries with chili and bacon.

Why Should You Love Pimento Cheese?

Unless you are lactose intolerant or a vegan, you should try pimento cheese at least once. What hooked me was the flavor combination of salty, spicy and cheesy, as well as the smoothish texture as it went down. But it wasn’t until we began to explore this tasty topic in Charlotte that I realized how deliciously versatile it could be.

For me, pimento cheese falls under the category of comfort food. If that makes no sense, I also include pizza, buffalo wings, and chili among my favorite comfort foods.

Pimento Cheese compliments and elevates everything it touches. It may not have originated in the South, but it’s as Southern as grits and buttermilk biscuits. Come to think of it, pimento cheese would go well with both of these as well.

Disclaimer: Our pimento cheese quest was generously hosted by Charlotte Regional Visitors Authority. However, all opinions, as always, are entirely my own.