The Art and Heart of Michele Maring Miller: 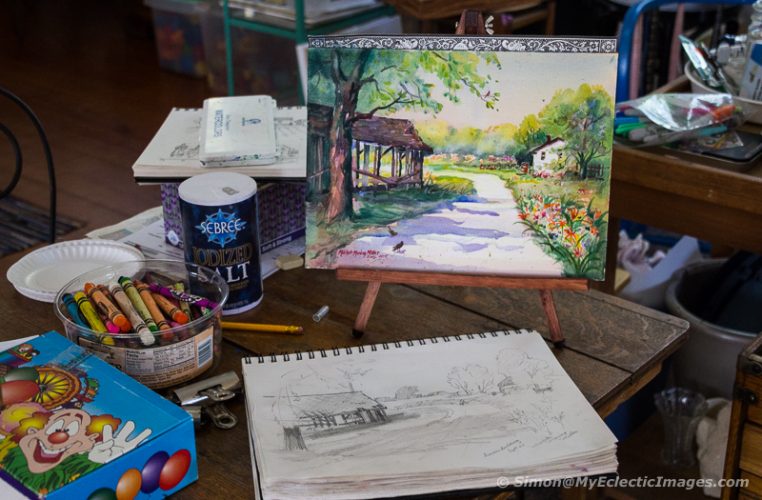 In rural Southern Iowa lie the Amana Colonies – seven in all – where time moves slowly and sweetly. Among the gentle people, in the community of West Amana, live Michele Maring (pronounced Mah-ring) Miller and her husband David. Together they are the heart and soul of Michele Maring Miller Gallery, where Michele tells enchanting stories of Amana Colonies through her vivid paintings.

Simon, Otto and I were fortunate to have had David Miller as our volunteer guide during our visit to Amana Colonies. One of the interviews he set up for us was with his talented wife, Michele. And what a treat that was. Not only did we see some remarkable paintings, we had the opportunity to spend some time chatting with the artist herself.

David brought us to an 1871 refurbished church in West Amana that serves as Michele’s studio, gallery, and their home. The floor is the original pine upon which worshipers walked nearly 150 years ago. The gallery/ living room customer area is used for the occasional large family gathering when the gallery is closed.

In this welcoming space, Michele preserves Amana’s history, architectural treasures, and natural beauty on paper and canvas. She paints in oils, pastels, ink, and watercolors, the latter being her preferred medium.

Michele doesn’t use photographs, preferring to rely on her eyes and memory. “When I start a painting,” she said, “in most cases, I see it in my mind before I even begin.”

The artist described her watercolor technique as consisting of three layers. She begins by applying splashes of paint and moving the paper around. The second layer is applied less loosely. The third layer is where the fine detail and focal point to which the eye is drawn is painted: a house, tree, person.

“It’s like decorating a cake,” Michele explained. “A painting takes two to three hours and 50 years to complete.” Her favorite painting? “The one that hasn’t been painted yet.”

To say Michele is a prolific artist would be an understatement. She keeps prices affordable because she wants to make space for more. And Michele has an endless supply of subject matter: old mills, bridges, barns, houses, animals, birds, flowers and foliage also find their way into Michele’s paintings.

Michel’s down-to-earth advice to beginning artists? “It’s very hard work. Have a day job, because you’re not going to make any money for most of your career.”

Art is part of Michele’s DNA. Her parents met in art school. Their parents were artists. Her children and grandchildren are also artists. Not only does art run in Michele’s family, it’s a full-blown addiction. “I’ve always painted and I cant’ stop,” she admits, “I wake up every morning and say I’m not going to paint, and then I paint.” But painting is one habit neither Michele nor anyone else wants her to kick.

By the time she was five years old, Michele knew she was an artist. She studied art and continues to study with the best artists she can afford. Her parents were onboard all the way, taking her to art museums and exhibitions and furnishing her with art-related books and supplies. They even gave their budding artist her own studio in the basement. of their Waterloo, Iowa home. Michele painted a series of 80 works based on her childhood memories.

At 19, Michele began her lifelong love affair with Amana Colonies. She started painting the history and wildlife of the area and never stopped. “I love the beauty and antiquity of this place,” she said.

David and Michele moved to Amana nearly 20 years ago. Michele taught high school art but elected to retire early in order to paint full time. Because she still loves teaching, Michele holds occasional workshops – no private lessons – but not to the point where it interferes with her painting. She often works with daughters, Dionne and Deidra, as well as her grandchildren, but doesn’t teach them. “I don’t want to influence them so much that they don’t express themselves,” Michele explained.

“I’ve been painting all my life,” Michele said. “This is exactly what I want to do. I work very hard and I’m extremely driven.”

Gallery Hours: Wednesday through Sunday 10 am to 5 pm and by appointment from December 26th through April 30th

Prints and note cards of Michele’s paintings can be purchased online from her website.