Take to the Sky at the National Soaring Museum: 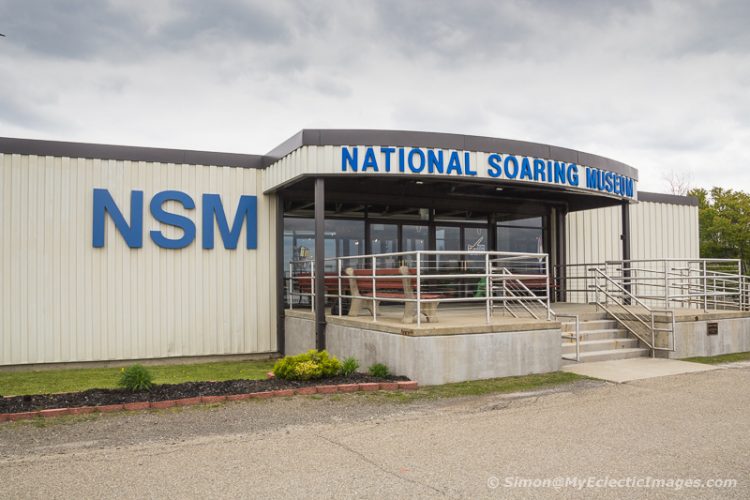 Discover Sailplanes Past and Present at this Elmira, New York, Treasure

Among other things, Elmira, New York is a “soar spot” for me. No, that’s not a typo. This charming town in the heart of New York’s Finger Lakes is known as the soaring capital of the world. One reason is the National Soaring Museum, atop nearby Harris Hill, one of two such museums in the USA. Another is the robust programs for children and adults who happily embrace the sport of soaring.

Simon, Otto, and I had the privilege of visiting Harris Hill twice in less than 18 months. The first was on a tour of Corning and other Finger Lakes towns. At that time, we spent a fascinating hour touring the museum. The second visit took place prior to the TBEX (Travel Bloggers Exchange) conference in Corning. On that occasion, Simon and I went up in sailplanes and learned how it felt to soar.

The National Soaring Museum is a 37,132-square-foot tribute to motor-less flight. It is conveniently located directly across from the Harris Hill Soaring Corporation’s Airfield. Situated 1,709 feet above sea level, it is an ideal location for launching sailplanes.

We arrived with the faint hope we might have the opportunity to go up in a sailplane, but the weather had other ideas. Our disappointment was soon forgotten, though, when we met the museum’s director, Trafford Doherty, who introduced us to the world of gliding.

With obvious sensitivity to my keen curiosity coupled with my lack of sight, Trafford conducted our tour providing detailed descriptions of the exhibits. He also encouraged me to touch some of the sailplanes on exhibit throughout the museum.

My first encounter was with a steel tubing frame. This was the fuselage of a sailplane first flown in Elmira in 1930. The flight – accomplished with no instruments – lasted 1 hour 38 minutes and sealed Elmira’s status as the soaring capital.

Next came a Schweizer 126, a 1970s all metal sailplane that carried instruments. “But there’s no fuel gauge”, Simon joked.

We entered a workshop housing sailplanes in various stages of repair and restoration. It was fascinating to get a glimpse of the components that make gliders tick.

Entering the main part of the museum, we encountered a dollhouse exhibit. Apparently, The museum took into consideration the interests of those who may have been dragged along less than willingly. Also, among the first exhibits we saw, was a diorama depicting an early technique for launching gliders involving men running with a kind of catapult to get the plane aloft.

Sailplanes took up most of the rest of the museum’s space. They covered the floor and hung from the ceiling. One exhibit consisted of glider models in a circle representing 100 years – from the late 1890s to the late 1990s – of soaring.

One of the most arresting pieces was a replica of a 1902 glider flown by the Wright brothers before they built a plane with an engine.

The entire museum was like a trip back in time, but the most interesting area for me was the military glider exhibit.

Elmira had the distinction of being selected as the first site for a World War II military glider and pilot training program. A total of 14,000, gliders were built, but only approximately 2,000 saw combat.

The gliders had an 83-foot wingspan and were built lightly and cheaply for single use only, and they worked as advertised. The planes carried troops and equipment into  combat zones. They were able to transport 13 fully equipped men, a planeload of combat supplies, or a military vehicle.

The downside was that the gliders were highly vulnerable to anti-aircraft fire. Also, enemy forces deliberately scattered ground debris in order to make landing treacherous. Many courageous allied troops were killed or injured, but the gliders’ contributions played an important role in defeating Nazi Germany.

Elmira began working its way up to its current status as early as 1930 when it hosted the first of 13 consecutive national soaring contests.

Paul Schweizer was instrumental in the birth of the National Soaring Museum. He and his brother founded the Schweizer Aircraft Corporation, which manufactured more than half the sailplanes built in the U.S. during the 20th century. The company was an integral part of the Elmira community, and Paul was determined that its gift of soaring be permanently recognized.

The National Soaring Museum had its humble beginnings in a converted farmhouse in the 1960s. It contained documents, model gliders, and a real sailplane parked outside.

A decade later the museum had its own building at Harris Hill. A devastating fire and several renovations and additions later, the museum offers visitors a complete history of motor-less flight and its contributions to the world both militarily and recreationally.

The day we finally had the chance to go soaring turned out to be mild with high cloud cover. Simon went up first, while I chatted with Peter Smith, a soaring club board member  and former director of the National Soaring Museum.

During our conversation, Peter told me that Harris Hill is the site for many regional and national competitions. He also noted proudly that proceeds from paid sailplane rides help underwrite the junior program, one of the  best in the country. “You can solo at 14,” he explained. “There’s no shortage of people who soloed before they can drive.”

Simon returned and took over the conversation and Otto. As I quickly learned, the tiny cockpit of a sailplane is no place for a 60 pound Lab.

My pilot, a combat trauma counselor for the Veterans Administration, helped me recline in the front of the plane and proceeded to buckle me in.

By the time he was done, I felt as if I had been trussed up like a chicken. He took his place behind me and handled the controls. Someone secured the transparent canopy over us. and we were off.

I could hear the engine roar from the tow plane and the clicking of the wheels as we bumped along for a surprisingly short takeoff run. And then we were up and clear of the hill in seconds. There was a slight drop as the ground went out from under us, and then we began our climb to about 2,500 feet.

I felt a slight sideways motion as the pilot released us from the tow plane. Other than wind noise, everything was beautifully quiet. With the exception of occasional mild turbulence, the flight was surprisingly smooth.

From our lofty vantage point, we could see Elmira Corning Regional Airport, Seneca Lake, the town of Horseheads, and Corning in the distance.

I felt a rise, and then the pilot stalled the plane. It felt like a mini rollercoaster and not as scary as I might have expected. The pilot told me they always train students to do this so they know how to recover when it happens.

All too soon, we began a slow but constant descent. The pilot unlocked the air brakes and positioned us for landing

A slight bump, a short roll, and my soaring adventure was over.

Would I do it again? In a heartbeat. I’ll spare you all the touchy-feely stuff about how I felt inside. Soaring is a private sensation everyone must experience in their own way. My final word on the subject? Go!

Disclosure: Our visit to the National Soaring Museum and our breathtaking sailplane flights were made possible through the generosity of the Chemung County Chamber of Commerce. However, all opinions, as always,  are entirely my own