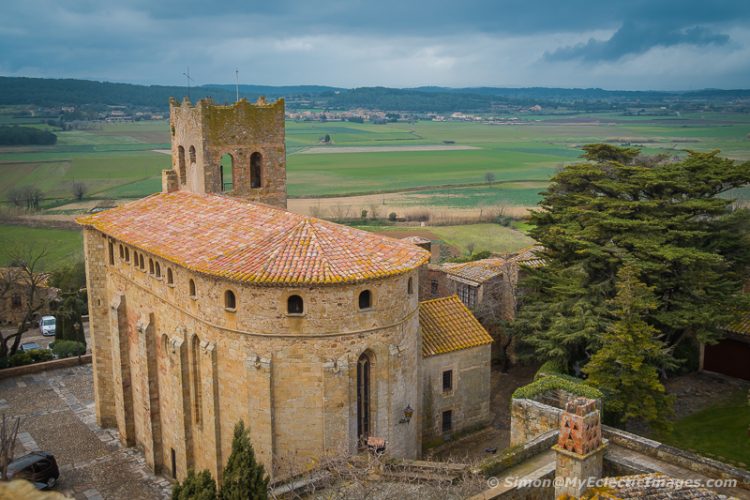 Warm sunshine and clear blue skies smiled down on Simon, Otto and me on our drive to the Costa Brava town of Pals. Little did we know the mixed bag of experiences that awaited us. But I’ll tell you right now, had we known how our visit would end, we would have continued without hesitation rather than forego the unique charm and exquisite beauty of this medieval Spanish village.

Pals sits atop a hill less than an hour’s drive from the city of Girona and a few short miles up from the Costa Brava beaches.

The historic center is Gothic through and through. The village of Pals has maintained its medieval architecture to the point where it felt as if we had been transported back to another time. Ornate arches, doorways and window frames have been lovingly restored to their former glory, making Pals a model for other towns and villages to emulate.

Placa Major, a charming square located in the heart of medieval Pals, is where you’ll find the town hall and the tourist office. From there, a road winds gently upward to the church of Sant Pere, the 12th-century bell tower and four large 14th-century towers that are the only remains of the original fortifications.

The views from this location are magnificent, and your eyes can take their time drinking in the stunning countryside comprised of distant rolling hills and flat rice fields. Once marshlands, these fields now not only add a unique cast to the landscape, they provide food and economic security to the Pals community.

Touchable Treasures from the Past

Esther, our guide, led us into the town hall, where our sensory odyssey began. She took note of my vertically challenged self and immediately retrieved a step-stool. What she wanted me to touch was the date, 1597 engraved above the elevator door. What is now an elevator was once a doorway leading into a room. This was our first introduction to the ways in which accessibility is incorporated into this historic building while maintaining its architectural integrity.

My next treat was a niche halfway up a flight of stairs. It contained a well-worn sandstone carving of St. Peter. The only easily identifiable part of his face was the nose, which apparently has stood the test of time better than the rest of him.

Once outdoors, Ester introduced us to many more medieval wonders. She pointed out the arch over the city’s main gate I had the opportunity to run my fingers over part of the 12th-century iron, as well as one of its hinges.

I touched the pass-through low doorway designed for the medieval population, which, on average was short. A section of Pal’s bedrock reminded my fingertips that this place existed long before humans set foot upon this land.

Roadway Leading from the City Gate of Pals to Sant Pere (©simon@myeclecticimages.com)

One of the most bizarre experiences I ever had was stepping into an empty burial spot in Pals. It was a shallow cave with the impression of a body carved into the stone floor. Esther verbally guided my footsteps as I explored the site. Much to my surprise, the head was toward the mouth of the cave, with the feet pointing to the rear. Whatever, if anything, had occupied this space was long gone, but the example of the culture that once flourished there had been preserved.

Burial Location Carved into the Native Bedrock in Pals (©simon@myeclecticimages.com)

Our next stop was the small gothic church of Sant Pere. After taking in the spectacular view, we entered the church.

Begun in the early 12th-century, this sandstone structure has a stunning vaulted Gothic interior, a 14th-century font and a cool and smooth to the touch shell-shaped vessel for holy water. The stone for this piece came from Girona.

It’s worth noting that braille plaques are present at every point of interest in Pals. The ones I saw were in Catalan, but I have seen English on similar installations throughout Spain.

Historical Marker in Pals Showing How Braille Has Been Integrated for the Benefit of the Blind (©simon@myeclecticimages.com)

The history of Pals dates back to the 9th century. Its name is derived from the Latin ‘Palus’, which means ‘marshy ground’. The inspiration for this moniker most likely came from the ponds and marshes surrounding the village.

Pals has the distinction of having been one of the first Medieval Costa Brava villages to be restored. A local doctor, saddened by the deterioration of his beloved village, stepped up and spearheaded its restoration. Thanks to his efforts and that of other dedicated individuals, the village of Pals was declared a Site of Historical Interest in 1973.

The Tower of Hours

The highlight of our tour was Pal’s historic medieval bell tower, known as the Tower of Hours. Built in the 12th-century, it is the tallest structure on the hill overlooking Pals.

The Tower of Hours in Pals (©simon@myeclecticimages.com)

Bells Atop the Tower of Hours in Pals (©simon@myeclecticimages.com)

Standing 49 ft high, this clock tower contains a small 16th-century bell marking the quarter hour and a larger early 18th-century bell that rings out the hour. The interior contains the tower’s clockworks and a recently renovated staircase that was easy to climb.

While waiting for the bells to mark 2:00 pm, Simon happily snapped photos of the panoramic view. After the small bell chimed the final quarter hour, the large bell followed with two strong notes that could be heard from miles away. Then, as if to make certain it had been heard, it sang out two more times.

Since we were already late for our scheduled lunch at Antic Casino, we hurried back down the tower stairs and outside. This turned out to be my undoing.

As we descended the outer staircase, Otto and I were in the lead. As soon as my right foot hit bottom, it sank into a hole, and down I went. To make a long story short, I broke the fibula of my left leg. However, we didn’t know that at the time, and choosing to believe I had nothing more than a badly sprained ankle, we kept our lunch commitment.

View from the Top of the Tower of Hours in Pals (©simon@myeclecticimages.com)

View from the Top of the Tower of Hours in Pals Showing One of the Towers of the City Wall (©simon@myeclecticimages.com)

A Catalonian Feast with Flair

With Simon’s help, I hobbled gracelessly into Antic Casino, where aromas of the fabulous meal to come acted as an anesthetic. Of course, the chair provided to elevate my leg and the ice pack didn’t hurt either.

The Entrance to Antic Casino in Pals (©simon@myeclecticimages.com)

Antic Casino seats approximately 100 diners but is divided into several smaller areas. The room where we were seated held 18. Housed in a building that had been an 18th-century casino, the restaurant still has the original floors and much of the structure, including the doors.

Owners Jordi and Adelena opened the restaurant nine years ago after traveling the world learning about international cultures and cuisines. They cook with locally sourced ingredients, and use their experience to create traditional Spanish dishes with an international twist.

Our feast began with three tapas served on slate tiles. The tuna carpaccio was accompanied by wasabi ice cream. I had to force myself not to turn up my nose at the combination, but being both polite and adventurous, I tried it. “Wow,” I exclaimed. “This is amazing.” And it was. The tuna was fresh, and the Wasabi ice cream added a balance of sinus-clearing heat, cold and sweet that raised the flavor of the tuna to a higher level.

The crispy green tea fish tempura served with marisco sauce and the even more crispy calamari with curried mayonnaise was also surprisingly tasty. As far as I’m concerned, when it comes to fried calamari, curry mayonnaise can be the new marinara.

For our main course, we were treated to “Mountain and Sea”. The dish was served piping hot and contained tender pork, succulent prawns and other shellfish, flavorful sausage with a mild kick and locally-grown rice made from Jordi’s mother’s recipe. The white wine we drank with our meal was cool and refreshing with subtle floral notes.

Mountain and Sea Served at Antic Casino in Pals (©simon@myeclecticimages.com)

A Decadent Dessert with a foundation of Coffee Ice Cream Served at Antic Casino in Pals (©simon@myeclecticimages.com)

If a meal can make a wuss like me forget about the discomfort of a broken leg, the restaurant that provided it should be commended. If I ever break a leg again, I will try to get back to Antic Casino for the best damned narcotic-free painkiller on the planet.

Aside from a rich history that can be relished in a compact walkable area, the village of Pals also offers a gentle dose of retail therapy. As you wander, you’ll encounter art galleries and quaint shops featuring colorful Catalan pottery. Or you can seek out more touristy stuff like jewelry and postcards.

Once you’re shopped out, you can pay a visit to a small museum called the Museo-Casa de Cultura Ca La Pruna. There you’ll find disconnected exhibits like a replica of an 18th-century pharmacy and artifacts from an 18th-century British warship.

When your feet begin to protest, you can refresh yourself with a cold drink at an outdoor café, or relax on one of the many benches to be found everywhere in Pals.

According to one of Catalonia’s most famous writers, Josep Pla, “Pals shouldn’t only be visited once, it should be visited one hundred times.” Well, I guess you could say that for us it’s one down and 99 to go.

To make the most of your visit to Pals, be sure to drop into the tourist office on Plaça Major.

Disclaimer: Our visit to Pals was generously hosted by Patronat de Turisme Costa Brava, Girona, VisitPals and Antic Casino.  However, all opinions, as always, are entirely my own.