History and Art at the Quart Pottery Museum: 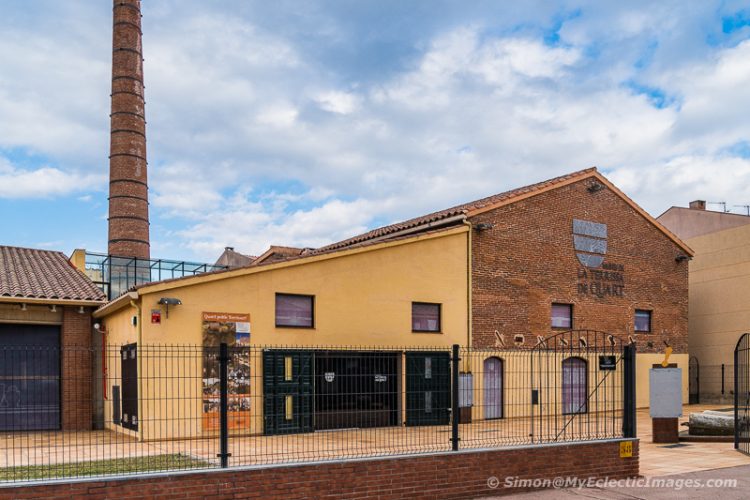 700 Years of Catalan Tradition in Clay

“Here we go again,” I thought, donning the apron and sitting down at the wheel. This was my second time in a year I found myself trying my hand – or rather hands – at pottery. John Keddy and Rocky Hill Pottery in the New York Finger Lakes were thousands of miles away from where I now sat with another master potter at the Quart Pottery Museum on Spain’s Costa Brava. However, I fervently hoped I hadn’t forgotten everything John had taught me months earlier.

Up to my wrists in clay while working with a master potter (©simon@myeclecticimages.com)

Located less than five miles from Girona, Quart Pottery Museum is an experience that is more than worth the 15 minutes it takes to drive to the village. There, you will be transported back in time to the 14th century where the tradition of crafting the region’s unique pottery, bricks and tiles was born.

Committed to making both the exhibits and pottery classes available to all, the Quart Pottery Museum is wheelchair accessible and provides information in Braille. Simon, Otto and I were privileged to have been invited to visit this unconventional inclusive museum to learn the fascinating story of how local potters created – and still create – both functional and decorative items that have stood the test of time.

The Braille Book in Catalan Describing the Museum (©simon@myeclecticimages.com)

A Page from the Braille Book in Catalan Describing the Museum (©simon@myeclecticimages.com)

The Quart Pottery Museum is housed in a restored brick factory and serves as a cultural center to raise awareness of a local craft dating back to the middle ages. The museum reverently preserves the industrial and artistic heritage of Quart.

As we toured the Quart Pottery Museum we gained an understanding of, and respect for, the processes of pottery-making as it evolved from the earliest to the most recent techniques. Throughout the centuries, the values and tradition of pottery-making in Quart have been nurtured, maintained and passed down through generations of local families.

As we entered the museum, we were greeted at the reception desk by a large pot from 1833. It was approximately three feet tall and the black surface had been engraved with a decorative design. Like most of the exhibits in the Quart Pottery Museum, it was not only touchable, but I was encouraged to experience its texture and contours with my fingertips.

The tour took us into am original U-shaped walk-in kiln with a curved ceiling. This “room” was used to fire bricks. We were shown how heat was channeled through spaces between two layers of walls. Before firing, the entrance to the kiln was bricked up and dirt packed into the gaps for a tight seal.

Entrance to a Kiln showing the double wall structure to allow heat to be channeled into the kiln (©simon@myeclecticimages.com)

Equipment such as a wheel that adjusted a ventilation slab, small tools of the trade and the kiln used to fire the pots were also original.

Wheel that was used to control the damper for the kiln (©simon@myeclecticimages.com)

Some of the old processes were displayed on small video screens. We watched a donkey pull a smooth roller over mounds of clay to flatten them so they could dry evenly.

The entire tour was interactive, and an adventure in traditional local art.

In 2011, this refurbished 1908 brickyard, opened to the public as the Quart Pottery Museum. There, through the exhibits of equipment and pottery, you can learn the story of pottery-making through the centuries, and its economic and cultural importance to the area.

Based on archeological discoveries, pottery has been an integral part of human development as far back as prehistoric societies. It met a basic need: that of storing liquids – yes, including wine – grain, food and other items requiring containment. That was the practical side of pottery. But as time went by, making these functional pieces esthetically pleasing became equally important.

The last few decades have been turbulent and uncertain, however, five Quart families have steadfastly kept the tradition of pottery-making alive. And, they have successfully managed to keep up with constantly changing needs and tastes.

The present generation of potters work with new materials, kilns, wheels and techniques. Yet these craftsmen have remained true to the time-honored traditions of care and quality.

The first step in crafting pottery is clay. Only fine clay, devoid of sand or vegetation, will do. Quart has the good fortune to have an abundance of this essential element readily available in the immediate area.

The next part is to find the best wood to fire the kilns. Nearby forests provide a continuous supply of underbrush, which burns fast and hot.

Once fashioned into pieces of art, the pots are placed on ceramic shelves for firing. Through holes in the kiln’s ceiling, the potters can look down and make sure the pieces are properly placed and not touching each other.

Much of the traditional pottery produced at the Quart Pottery Museum is black with a matte finish. This is achieved through a specific and lengthy firing process. By the 19th century, red pottery was also being produced in the area. The red hue was accomplished by simply not plugging the kiln at the end of the firing process

The Quart Pottery Museum’s artisans reproduce traditional styles of pottery from the 14th century and later. Everything is made by hand.

Examining a Typical Jug Made in Quart (©simon@myeclecticimages.com)

We were less than successful at guessing what some of the pieces were. There was a large vessel that would have been used for washing clothes. Ashes were used instead of detergent, and the water was let out through a plugged opening near the bottom.

A vented pot that resembled a candle holder was employed as a hand warmer in days gone by. Women also took this type of item with them to work at the market. They would use them under their skirts as a sort of “bun warmer”.

The Quart Pottery Museum was a unique experience for us, and we would highly recommend a visit if you are in the Girona area. I commend the museum for its efforts in the area of accessibility. Being able to touch pottery pieces and equipment made a world of difference in my ability to learn from and enjoy the exhibits.

And what of my own efforts at pottery-making? Well, I’m sad to say John Keddy would have been less than proud. The beautiful pot with which I came away was not one of my making. It was a gift from Joan, who enriched our museum experience beyond words.

Have you had the opportunity to discover timeless traditions? If you have, we’d love to read about your experience in the comments.

A Modern Piece of Pottery Created by a Quart Artist (©simon@myeclecticimages.com)

Guided tours are available by appointment for a maximum group size of 25 people.

Disclaimer: Our visit to Girona was generously hosted by Patronat de Turisme Costa Brava, Girona, however, all opinions are entirely my own.