Six Legs Back at the Annapolis Boat Show:

A Year Later and a Lot Dryer

It was just over a year ago that I put my first post, Six Soggy Legs at the Annapolis Boat Show, up on this blog site. In that post, I complained about the non-stop rain, talked about doing girl stuff while the guys lost themselves in gadget land and outed Otto on his wussiness.

Fast forward one year, and Simon, Otto, Jerry, Mallory and I were back in Annapolis for the 45th Sail Boat Show. This time, however, the rain stayed away for the most part, Simon got to see everything he wanted to see, Otto’s paws stayed dry and I had a plan of action for how I wanted this post to read. So here are three examples of what made this boat show for me.

Every October, Annapolis, MD is transformed. Four hundred tents of varying sizes appear in contiguous public and private parking lots, and a 250 boat marina materializes where there was no marina three days earlier: all in preparation for two world-class boat shows.

Before I reveal the secret of how these nautical extravaganzas appear and then, vanish I must make a correction that is a year overdue. While looking at last year’s post to remind myself of the content, I realized that the order of the boat shows was reversed. The Sail Boat Show is usually held on the second weekend and the Power Boat Show the following weekend. Not the other way around.

Okay, now that my conscience is clear, here is what I learned about how these two shows are assembled and disassembled in three days at the front end, back end and between shows. And I’ll give you a clue. It has nothing to do with Harry Potter and his friends. 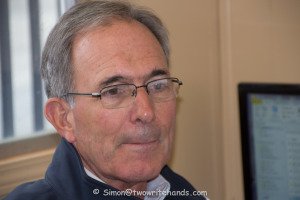 The magicians who have these events down to a fine art are Paul Jacobs, President and General Manager of Annapolis Boat Shows and his team of six full-time and fewer than 100 temporary employees. Simon and I had the opportunity to speak with Paul on the second morning of the Sail Boat Show, and his descriptions of the planning, coordination and execution of the two fall show, as well as two shows in the spring, was nothing short of impressive.

Three days before the start of the Sail Boat show, everyone swings into high gear. While floors are assembled, a sea of tents rises out of the asphalt, pilings are being driven into the harbour and one-and-a-half mile of floating docks are moved into place.

As soon as the Sailboat Show is over, the Annapolis Boat Show team has exactly three days to move all the sail boats out, bring all the power boats in, and reconfigure docks and tents.

“It’s phenomenal to watch changeover,” Paul marveled. When 200 boats clear out of the marina and half an hour later, we start bringing in the power boats, it’s something you wouldn’t believe could happen.”

Three days after the Power Boat Show, the same efficiency and coordination returns Annapolis to its normal state. “You would never even know there was a boat show here,” Paul said.

Of course, there is a lot more detail and fine tuning that is involved in carrying these shows off as well as these folks do. There is security to consider, evacuation plans to be put in place and the ability to handle the unexpected. What impressed me, though was how they made everything look easy, when nothing could be farther from reality.

To learn more about the Annapolis Boat Shows, visit their official website.

One of the many pleasant surprises at this year’s Sail Boat Show was a chance encounter with Michelle Brumfield and Annette Lindsey at a party on the first night. It turned out that the two, co-owners of BedCrafters by Michelle, were first-time exhibiters, or “boat show virgins”. 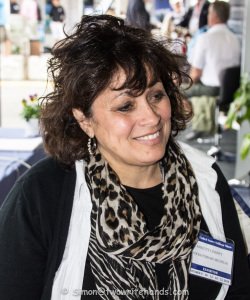 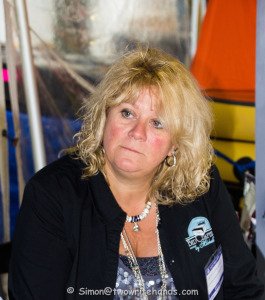 BedCrafters by Michelle is a company that makes customized beds in all sizes and for all purposes: beds for homes, boats, dogs. As Annette said, “Anything you need to sleep on, we can do it.”

Michelle has been manufacturing high quality beds since 1999. Annette bought one bed from her, then came back to buy another. The two decided to team up and have been business partners for the past five years.

The company builds 30 to 50 beds a day, and uses a selection of the highest density foams available. Michelle proudly recited their slogan: “Give us one night and we’ll give you a better day. We Promise.”

Although they want to sell their beds, both Michelle and Annette focus on educating their customers, and helping them make the right decision on the best bed to purchase: the one that will consistently deliver a great night’s sleep.

In the customization process, compression rates are altered to make sure the bed fits your body build. Factors that are taken into account in order to properly customize a bed include physical needs, medical considerations, whether you sleep on your back, side or stomach and whether you’re a “warm sleeper”. This is where Michelle’s manufacturing experience and Annette’s medical background combine to produce the perfect bed for each of their customers.

The goal is that you will lie as if you’re standing up straight. If you’re hammocked even slightly, you’re back is always trying to straighten itself out.

Both Annette and Michelle are very knowledgable and passionate about what they do. They’re also great fun at a party.

The BedCrafter by Michelle website describes both their boat mattresses and their custom mattresses for your home.

A Boat for All Reasons

Simon and I are proud owners of an Island Packet 32, which has served us well for nearly 20 years. Sometimes we talk about what we would like next, if we could afford it. Of course, it would be another Island Packet, but which one? Now we know.

The first boat we boarded the first morning of the Sail Boat Show was the newest kid on the Island Packet block, the SP Cruiser Mark 2, and it was a beauty.

The first generation SP Cruisers debuted in 2008 and have been winning Cruising World and Sail Magazine awards ever since.

The SP Cruiser is a power sailer that has a large rig and a 110 HP engine that moves it along at nine to ten knots per hour. 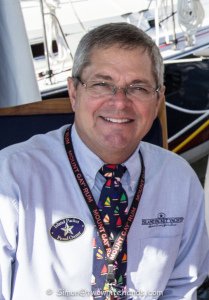 Why build a combination sailboat/trawler when all you’ve been building has been high quality sailboats since 1979? “We were seeing older Island Packet owners leave Island Packet and go to a trawler,” said Bill Bolin, Vice President of Marketing and Sales for Island Packet and Blue Jacket Yachts. Since sailboat owners switch to trawlers when sailing becomes physically taxing, and begin to look for more below-deck comfort, it only made sense to keep those weary sailors in the Island Packet family.

Lets have a boat with trawler-like livability,” said Bill, recalling the logic that drove the SP Cruiser’s design, “but that can still pull strings when the weather is conducive.”

Of the original 39 SP Cruisers, 38 were sold. Three were built as trawlers alone. The feedback was positive, but there were features that owners wanted to see in a second generation version.

The SP Cruiser Mark 2 was unveiled at this year’s Sail Boat Show, and contains many of those suggestions. The size of the aft cockpit was doubled to make it an even better gathering place for cocktails – very important when you’re a sailor. The hard top was extended to cover the new aft cockpit. There is also a “conversation pit” forward of the helm station that offers comfortable seating and a great view of what lies ahead. It was easy to picture myself stretched out with a good book, a glass of wine and Otto’s soft head within reach. 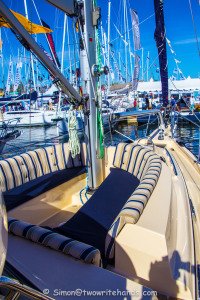 Upgrades and changes down below added a note of understated luxury to the living area. The Formica counters in the galley had been upgraded to Corian, and the trims to solid teak.

The boat can be controlled either from an enclosed bridge, or from the “conversation pit”. Sails and lines can be adjusted with the simple push of a button. And you no longer want to sail it, you can have all the sails, lines and fitting put in storage and run the boat as a full-time trawler.

A bare bones SP Cruiser sells for $538, 950. If you want to purchase it fully loaded: air conditioning, chart plotter, electronic sail management, etc., you’re looking at close to  $665,000. The SP Cruiser on which Simon and I stood was the latter. ”There’s nothing you can put on this boat,” Bill said.

When I asked Bill why those who can afford it might want to spend such a large amount on any of the beautiful but pricy Island Packet boats, his answer was, “Where do you want me to start?” 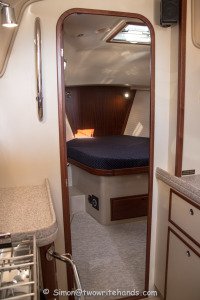 A View of the Forward Cabin of the SP Cruiser 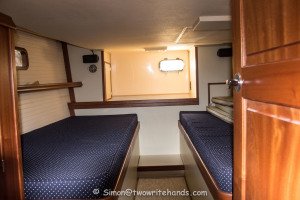 Aft Cabin of the SP Cruiser

As owners of our second Island Packet, Simon and I have had experience with all these aspects and more. Yes, we love our current boat, but what would buying the occasional lottery ticket hurt? At least we can be sure of at least one thing we would purchase almost immediately.

The current lineup of Island Packet Yachts can be found on their website.

The year between Annapolis Boat shows has seen many changes for me as a writer and traveler. It is my hope that these changes have brought some smiles to you, as well as some useful information. Please continue to join Simon, Otto and me as our traveling and learning progresses.