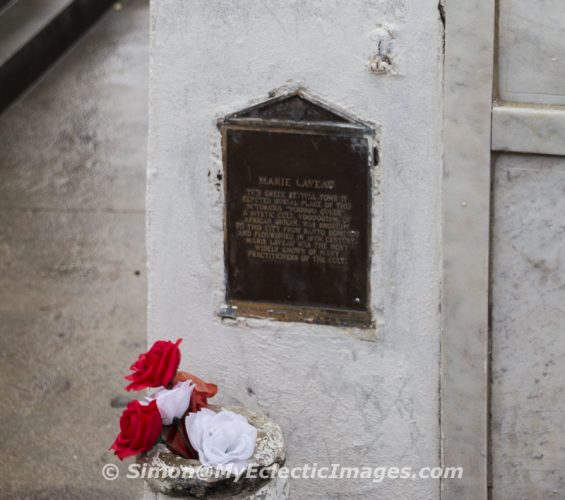 Who Would Have Thought Death Could Be So Much Fun.

Cemeteries have always had a muting effect on me. Whether they were military, historic or associated with the death of someone I knew, my tendency to crack lame jokes and be otherwise irreverent took a back seat to my desire to be respectful. That was until Simon, Otto and I took a tour of St. Louis Cemetery #1 in New Orleans.

Perhaps it was the unique look of the cemetery, with its above-ground tombs lining the walls and standing in neat rows throughout the property. Or it might have been the entertaining way in which Charles Duffy, our guide spun his fascinating tales. Or it might have been that giddiness I always feel when in the Big Easy. Whatever the reason, my mood was anything but somber.

Looking Out Over St. Louis Cemetery from the Upper Level of the Hop-on-Hop-off Bus (©simon@myeclecticimages.com)

We were on a Hop-On-Hop-Off bus tour, and had arrived at Basin Street Station. Our tour tickets entitled us to a 50 percent discount on the St. Louis #1 Cemetery Tour, so we hopped off to tempt the overcast sky and learn about the oldest existing cemetery in New Orleans.

Charles greeted us, went over some pre-tour information and set the tone for our tour. By the time we exited the building and entered the cemetery I knew we were in for a treat.

Once upon a time, you could visit the cemetery on your own, and wander where you pleased. Since 2015, however, the Catholic Church instituted strict new rules prohibiting tourists from entering without a licensed tour guide. The reason? A sharp increase in vandalization of the historic tombs.

St. Louis Cemetery #1 was the first New Orleans cemetery with above-ground tombs. Its predecessor, St. Peter’s Cemetery, buried its dead in the traditional manner, and learned the hard way what a bad idea this was. Due to the city’s high water table, coffins would unearth themselves every time a hurricane or a particularly heavy rainfall caused flooding.

For this reason, plus the fact that you could store far more remains in family tombs than in individual plots, it made sense for the people of New Orleans. Between a series of major fires and 27 major yellow fever epidemics between 1718 and 1903, the decision turned out to be both wise and practical.

The Art of Dying in New Orleans

Charles walked us through the process of dying in New Orleans. If you’re lucky, you could be sent off with a jazz funeral. First a jazz band accompanies the funeral procession playing somber music. Upon arrival at the cemetery, the band remains outside the gates until prayers have been said, and your coffin is slid into the tomb. The band then breaks into rousing Dixieland tunes, and everyone leaves the cemetery. At this time, your tomb is closed, and you can rest in peace. Or can you?

According to tradition, a year-and a day later, what’s left of you is shoved to the back of the tomb, ready for the next corpse. During your waiting period, your body will have gone through a hot, steamy New Orleans summer, when the tomb’s internal temperature can reach 600 degrees. This results in natural cremation, leaving approximately a pound-and a-half of your ashes.

Charles took us to the oldest tomb, then to the newest. He then pointed out a large white pyramid-shaped monstrosity that has no occupant at present. This will be the future “home” of actor, Nicolas Cage at St. Louis Cemetery #1. He fell in love with New Orleans, and decided this was where he wanted his final resting place to be. Although he lost all his other property during his much-publicized financial difficulties, the one thing he got to keep was his tomb. One has to wonder if Nicolas would be allowed to move in prior to his death, should his finances take another dive.

Some on our tour recognized the tomb where scenes from the movie “Easy Rider” were filmed. When the movie was released, the Catholic Church was not at all amused, and immediately banned any future filming in New Orleans cemeteries.

Perhaps the most fascinating structures were the society tombs. If you belonged to a police officers or firefighters society, or a society of French, Spanish, Italian, or Portuguese immigrants, You were literally good to go.

Upon your demise, your society would take care of your funeral, move you into a large tomb, where you could spend eternity with fellow deceased society members and the society would look after your family.

Among the over half a million residents of St. Louis Cemetery #1 are six Revolutionary War soldiers, Homer Plessy, a black man who committed a high profile act of civil disobedience following the American Civil War, and the famous Voodoo queen, Marie Laveau.

Charles set the record straight regarding tales of frequent floating corpses during periods of flooding. During the worst epidemic of yellow fever in 1853, which killed 11,000, a series of events culminated in the only such major incident of this kind.

It was at the height of the summer, when intense heat, swarms of mosquitos and hurricane forces descended upon New Orleans. People were dying in such large numbers, bodies had to be buried in shallow mass graves. The mosquitos caused the yellow fever. The hurricane floated the bodies. And the heat did the rest. Living in the area of the cemetery must have been an additional nightmare for the already depleted and distraught population.

The last stop on our tour was the tomb of Marie Laveau, the most visited burial site next to that of Elvis.

Marie’s tomb underwent major renovation after vandals jumped the wall in the dead of night, and completely covered it in hot pink latex paint.

As if the vandalism itself wasn’t bad enough, anyone knowing anything about Marie Laveau would have known her favorite color was blue. But vandalism by any other color is still vandalism, and the Catholic Church set about to rectify the problem. What did they do? They cleaned the offending paint job with a high powered pressure washer, thus severely damaging the plaster, and creating an even bigger problem in the process.

Although St. Louis is a Catholic cemetery, a Protestant section can be found in the northwest corner. And, as in the case of Marie Laveau, tombs of Voodoo practitioners can be found scattered throughout the cemetery.

After an easy ramble through the cemetery, our tour came to an end. Charles’s narrative was engaging, informative and, at times, downright funny. Combined with the beauty and charm of the cemetery, the time spent taking this tour was well worth hopping off the bus.

One of the Walkways in St. Louis Cemetery #1 (©simon@myeclecticimages.com)

This cemetery is largely wheelchair accessible

Disclaimer: Our visit to New Orleans was generously hosted by the New Orleans Convention and Visitors Bureau. However, all opinions are, as always, entirely my own.