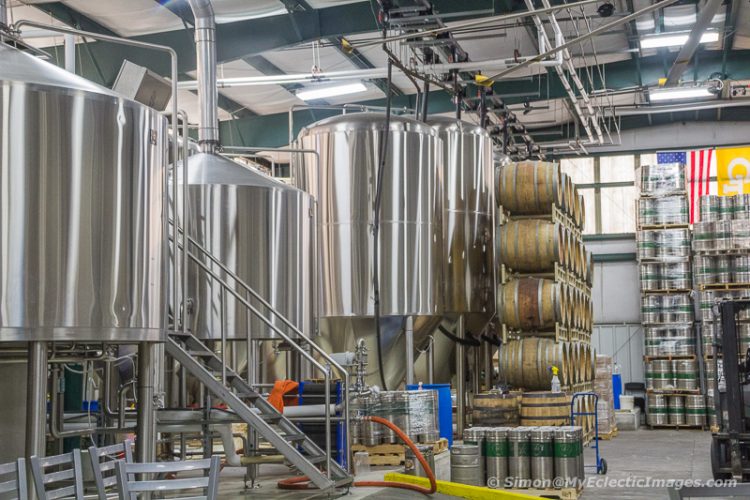 Finding out if there’s more to drink in Savannah, Georgia than sweet tea and mint juleps can be a most pleasurable experience. If you choose to undertake this mission, checking out the city’s growing microbrewery scene would be a fine way to start. Of course, you’ll want to begin your search at Southbound Brewing Company, the micro brewery that jumped through all the bureaucratic hoops, and blazed the way for all the rest to follow. Simon, Otto and I had the pleasure of doing just that on our last visit to Savannah, and here’s what we learned.

Simon chose Cluster Flies which he described as having something of a tart entry.  He found it transitioned to a sour bite on the back end. The aroma was akin to apple cider. I tasted and found the effect refreshing. The tartness was definitely there, but not overpowering.

Since I’m a sucker for funky beers I couldn’t resist trying Moon Dance. This was a spicy imperial stout fortified with smoked peppers. It had a distinct back-end kick and smoky undertone. It smelled more like coffee than beer. I loved it and would drink it every day, if I could.

Moon Dance was one of Southbound’s small-batch beers made for a special event. I was fortunate to have been in the right place at the right time.

Because founder and brewmaster, Smith Mathews, and his partner, Carly Wiggins, are as passionate about music as they are about their beer, each brew is named after a song or musician. And each name is a play on words. For example, Hop’Lin IPA, one of Southbound’s most popular beers, is named for Janice Joplin. Like its namesake, it’s hoppy with a piney, citrus bite.

Scattered Sun Belgian Wit is another favorite. It’s crisp with a hint of citrus.

The Daily Beer Menu at the Southbound Brewing Company (©simon@myeclecticimages.com)

Moonlight Drive is one of Southbound’s seasonal beers, available in winter. This unusual brew is an Imperial Coffee Stout, made with local coffee. Its summer counterpart is a complex beer with hints of stone fruits, citrus, elderflower and other subtle notes, called Picture of Nectar.

The above are just a small sampling. Between the Hop’Lin IPA and the Scattered Sun – available year round – the seasonal beers and small-batch brews, variety rules at Southbound Brewing Company.

Our guide on our Southbound Brewery Company tour was Tour and Events Manager, Natalie Alexander. Not only did she show us around the facility, she broadened our knowledge of beer by sharing some fascinating facts.

For one thing, beer wasn’t always made with hops. Once upon a long time ago, British sailors would take beer on long voyages. Both the beer, and subsequently their moods, would eventually turn sour. So, the resourceful Brits began to use hops as a preservative. Thank you, old chaps.

Southbound uses hops in all its beers, but, as was the case with the brews we sampled,  you can’t always taste it. Hops are added at different times, depending on the desired end result. An early addition will produce a bitter, such as Guinness. If it’s introduced in the middle of the process, you’ll recognize it in the aroma. Add it later, and you’ll taste a distinct hoppy flavor.

Southbound employs its two 90 barrel fermentation vessels to brew the Hop’Lin and Scattered Sun. The 60 barrel vessels are used for seasonal beers, but the two 30 gallon barrel tanks might as well be educational toys. These are used to concoct experimental small-batch beers.

The 60 Barrel Brewing Tanks at the Southbound Brewing Company (©simon@myeclecticimages.com)

The smoky heat in my imperial stout was born in those small tanks. Southbound entered a brew in a competition. It was called Cash Stash and was made with ingredients found in prison: yogurt, cereals etc. The beer didn’t win, but folks seemed to love it. “We do it for fun,” Natalie explained, “We like to play with beer.”

Because the building isn’t air conditioned, a Big-Ass Fan yes, that’s its real name – cools the facility throughout the sweltering Savannah summers. But don’t worry, the beer, is always ice cold. “We don’t air condition for ourselves,” Natalie chuckled,  “but we keep the beer cold.”

Southbound Brewing Company opened its doors in mid May 2013, and for Smith and Carly, it was the realization of a dream.

The two had grown up together in Statesboro, Georgia, and are graduates of Georgia Tech.

While studying business administration in college, Smith started home brewing. He was also working for Sweetwater Brewing Company. In the fall of 2009, Smith began his studies at The Seibel Institute of Technology in Chicago. As part of the program, he traveled to Munich, Germany to study at Doemens Academy.

With his International Diploma in Brewing Technology from the World Brewing Academy in hand, Smith came home and returned to Sweetwater as a brewer. At the same time, he was working toward his MBA. After helping open a brewery in Charleston, South Carolina, it was finally show time in Savannah.

Carly graduated from Georgia Tech with degrees in Industrial Design and Business Administration. Her focus was marketing, and like Smith, she worked for Sweetwater Brewing Company. Carly pursued her career in marketing and events, while still doing design work, and eventually joined a startup brewery in South Carolina.

When Smith was ready to open Southbound Brewing Company, he invited Carly to come aboard as a member of the founding team. Today, while Smith creates beautiful brews, Carly brings her extensive knowledge and experience to her position as Southbound’s Marketing and Events Director

Although Natalie arrived on the Southbound scene a little later, she is a valued member of the team. Her background is in the service industry. She also studied advertising and marketing, making her the ideal person to conduct tours and help promote the brewery. “Beer is a crazy new art,” Natalie said, “and I fell in love with it. I enjoy going to work every day.”

Along with its impressive beer line-up, Southbound Brewing Company makes its own sodas. We sampled the orange cream soda (sweet with a splash of orange), root beer (smoother than the familiar canned stuff) and ginger beer (less prickly than others I’ve tried). Its flavor and gentleness made it my hands-down favorite.

Unfortunately, Southbound doesn’t can the sodas. You can enjoy your flavor of choice at the brewery by the glass and/or to take them away in growlers.

Remember what I said about the music playing when we walked into Southbound Brewing Company? Well, we learned that music is as important as the beer. Smith and Carly have had a life-time love affair with music, and everything revolves around southern and classic rock, as well as bluegrass. But fear not, the Music is loud enough to hear but not so loud as to inhibit conversation.

Southbound offers its customers a Weekly Cask, a new small batch creation. At the time of this writing, this week’s beer is a Sour Cherry IPA. I’d try that one in a heartbeat. And next week? Well, that’s anybody’s guess, The only sure thing is it will be a surprise.

There’s always something going on at Southbound Brewing Company. The brewery is a popular venue for concerts and fundraisers, and has the ability to assemble a stage for live music. Also, the facility is frequently rented out for private events.

And as if all this isn’t enough to entice clients, artists and VIPs can participate in brewing a small-batch beer created and named especially for their event.

Southbound Brewing Company does all its own bottling, canning and labeling. They give generous amounts away as part of the tour and tasting, and a limited amount is included with your ticket to a concert or fundraiser.

You can find Southbound beer in North Carolina, South Carolina and Georgia. All the beer must be sold through distributors. In other words, the brewery can’t sell you its own beer.

Happily this stupidity will come to a long-overdue end on September 1, 2017, when SB85 becomes law in Georgia. From that day on, Southbound Brewing Company will be officially allowed to sell its beer directly to loyal customers and new devotees.

If you love classic with a funky option in both your music and your beer, you can’t go wrong at Southbound Brewing Company We never needed a reason to go back to Savannah, but this laid back, friendly brewery gave us a good one anyway.

You can tour the Southbound Brewing Company facility Wednesday-Friday 5:30 – 7:30 pm and Saturday 2 – 4 pm.

Tours begin approximately every half hour, and reservations are not required.

The cost is $15 and includes your tour, 36 ounces of beer to sample, and your choice of a 32 ounce filled growler, a six-pack of one of Southbound’s core beers, a souvenir koozie, or for $5, you can purchase a growler glass and get it filled with anything on tap.

The Office Building of the Southbound Brewing Company (©simon@myeclecticimages.com)

Updated information on what’s brewing at Southbound Brewing Company can be found on the brewery’s website.

Disclaimer: Our visit to Savannah was generously hosted by Visit Savannah and we were guests of Southbound Brewing Company However, all opinions, as always, are my own