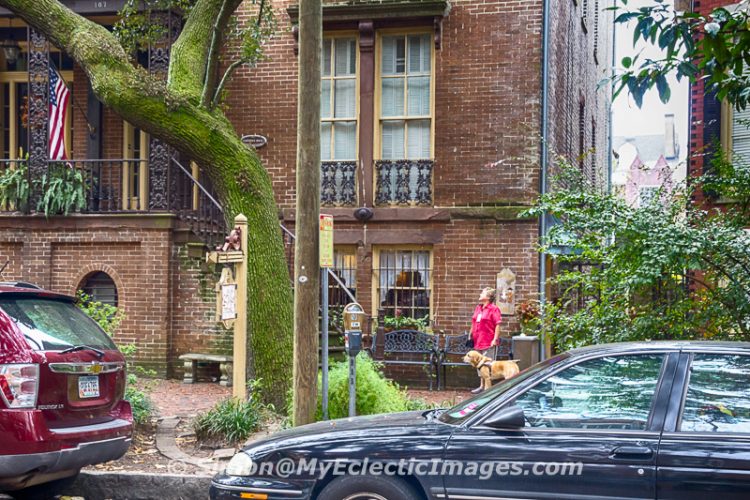 No Visit to Savannah Could Be Complete Without It.

It was Summer, 1988, and we were sweltering in Savannah, GA. Our boys were seven and five, and we had taken them to Hilton head, SC for a week at the beach. By the time Wednesday rolled around, we were all itching for a bit of variety. So off we went to Savannah for some sightseeing and Southern cooking. We had been told about a place called Mrs. Wilkes Boarding House that promised a fabulous meal and a great back story. And as we sampled Mrs. Wilkes fabulous fare, we were WOWed by both.

The restaurant opened at 11AM, and we arrived early. Unfortunately, so it seemed did half the planet. Okay, maybe that was a bit of an exaggeration, but it took forever before we finally stood, poised to enter. By this time, we were on anticipation overload as a result of the tantalizing aromas wafting toward us every time the door opened and we inched a little closer to its source.

We were ushered, 10 at a time, to occupy long tables that had been recently vacated and cleaned. Platters and bowls had been placed on the table laden with fried chicken, beef stew, creamed corn, rice, potatoes, collard greens, and several offerings I cannot remember. Freshly baked biscuits, corn muffins and ice tea were also present.

Besides the four of us, the table was occupied by six people we had never met before. But as the platters and bowls were passed around family style, the hidden magic of Mrs. Wilkes began to take hold.

While we sampled and savored the spread laid out before us, conversations began to take root and flourish. By the time the banana pudding arrived, Kevin was deeply engrossed in a discussion about birds with the man sitting next to him, as the rest of us chatted back and forth from one end of the table to the other, strangers no more. By the way, the food was delicious, especially the chicken, greens, black-eyed peas, dirty rice, corn, squash, corn muffins and banana pudding.

Sema Wilkes and her husband purchased the 1870 boarding house in 1943. Over time, they renovated it, and eventually opened the restaurant in the lower level, while still making the above rooms available for rent.

Considering the nation was in the middle of the Second World War, Mrs. Wilkes was far ahead of her time, because not only was she a phenomenal cook, she was also a smart business woman. By the time she passed away at 95 in 2002, She had become a beloved fixture of Savannah’s Historic District and an international ambassador for the city.

Since that first delightful meal, lunch at Mrs. Wilkes was always on the agenda when we visited Savannah. More than once, we had the opportunity to tell her face-to-face how much we enjoyed everything about her restaurant – okay, we didn’t enjoy waiting in line – and I remember Mrs. Wilkes as a gracious lady. Gary, who developed an interest in cooking at an early age, purchased one of her cook books, and she autographed it for him.

Fast forward to 2015, and Simon and I were in Savannah as part of a story on which we were working. Taylor from Visit Savannah and Sara from Visit Tybee arranged our itinerary, and  treated us to lunch at what is now called Mrs. Wilkes Dining Room.

It had been many years, and I really don’t know what I expected, but not much about the restaurant had changed. The same offerings were still served family style on long wooden tables, and it was still easy to engage in conversation with total strangers. The chicken was just as crisp, flavorful and tender as ever, the collards were smokey with a slight kick at the back end, and the peach cobbler, one of my favorites over the years, was as peachy as I remembered.

Mrs. Wilkes nurtured generations of hungry locals and tourists for nearly 60 years, winning them over 10 at a time. Today, her family carries on Mrs. Wilkes legacy of traditional country cuisine served up with a hefty pinch of Southern hospitality.

For those not familiar with country comfort food, The meats, vegetables and sides tend to be a little on the salty side, and the desserts aren’t overly sweet. For me, that’s perfection.

I recommend you head straight for Savannah, and give Mrs. Wilkes a try. Even if you’re a picky eater, you’ll waddle out of the restaurant full to the gills, smiling and saying, “WOW!”

The restaurant is open Monday-Friday, 11am-2pm However, if you’re in Savannah in January, you’ll be out of luck. Mrs. Wilkes is closed for the entire month.

Lunch will set you back $22 for adults, and $11 for children 10 and under. The price includes tax.

Be sure to arrive early and armed with cash. The restaurant neither takes reservations or accepts credit cards.

Disclosure: During our visit to Savannah and Tybee Island, we were generously hosted by Visit Savannah and Visit Tybee. However, all opinions expressed in this post are delectably my own.