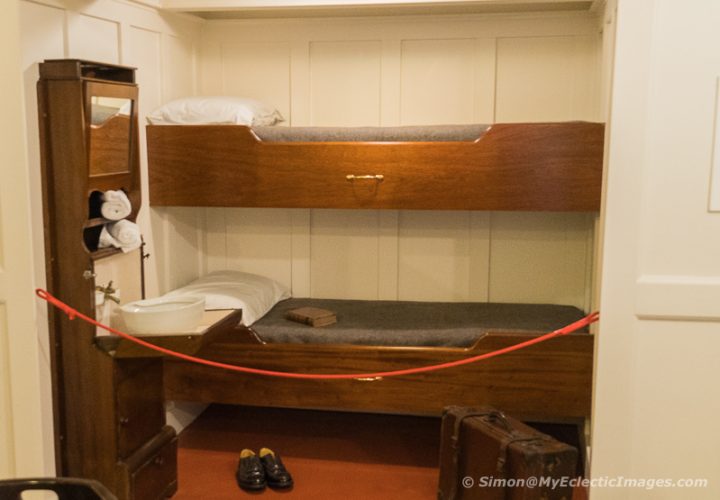 Several months after Simon, Otto, and I immersed ourselves in history and tragedy at Titanic Belfast, we found ourselves in County Cork, Ireland. There, in the town of Cobh, we discovered another fascinating aspect of the story at Titanic Experience. This was the location from which the last 123 passengers waited to board the tenders that would take them to Titanic, anchored at the mouth of the harbor.

View of the Town of Cobh with the White Star Building Housing the Titanic Experience on the Waterfront (©simon@myeclecticimages.com)

Located in the heart of the town, Titanic Experience occupies the original White Star Line Ticket Office, which dates back to the early 19th century. It delineates the history of the final departure point for Titanic. But it also became known as “Old Heartbreak Pier” since approximately 1.5 million Irish men, women, and children emigrated from here to lands far away.

Our visit to this attraction was relatively short compared to the several hours we spent at Titanic Belfast. The venue was much smaller, but the exhibits were no less informative or moving.

Our 30-minute tour of Titanic Experience was led by Lynn, a charming guide with just enough of an Irish lilt to soften the hard facts of the story she told. The guided portion of our visit consisted of a combination of Lynn’s narrative and cinematographic inserts that brought us as close as possible to actually being there over 100 years ago.

We began with a welcome to board the tenders from a Titanic officer. The tour ended with us sitting in a lifeboat, listening to eye-witness accounts of the ship’s sinking. Hearing the screams of the doomed and watching the mighty Titanic slip beneath the ocean’s surface, brought home the horror of the night of April 14, 2012.

During the tour, we stood on the balcony where first and second class passengers were segregated from each other as they waited for the call to board the tenders. Third class passengers waited down below. It was unlikely these groups of passengers ever saw each other until catastrophe made them equals in death or survival.

Lion Guarding the Entrance to the Titanic Experience in Cobh (©simon@myeclecticimages.com)

Among the many fascinating facts we learned from Lynn was that Cobh had been renamed “Queenstown” in 1849 by the British in commemoration of a visit by Queen Victoria. The name was officially changed to Cobh (pronounced “Cove”), around the time the Irish Free State was established in 1922. As Queenstown, the town took its place in maritime history as Titanic’s final port of call. Titanic stayed a mere one-and-one-half hours to take on passengers and exchange mail bags before setting sail across the Atlantic for New York.

Before our Titanic Experience tour began, we were each given a boarding card bearing the name and details of one of the 123 passengers who boarded Titanic on April 11, 1912. We were told that before leaving the building, we would learn if we were among the 44 who survived Titanic’s sinking.

Simon was Andrew Keen, 23, a third class passenger traveling alone. Otto – yes, he got a boarding card, too – was Edward Ryan, 24, also a solo third class passenger. My boarding card bore the name of Lillian Minahan, 37, who traveled in first class as a member of a party of four. Despite the seriousness of the subject matter, I couldn’t help reveling in my elevated status for a brief moment before our tour began.

Seven of Titanic’s passengers who boarded at Southampton disembarked at Cobh. One was a family of five who planned to continue their holiday in Ireland. Another was a man about whom little is known. But the passenger who remains famous to this day was Father Francis Brown, a Jesuit priest visiting his uncle in the area. The story goes that he had been befriended enroute by some Titanic passengers who invited him to join them on the trans-Atlantic crossing. He was denied permission from the powers that be in the church, so he had to decline the offer. Not only did this seemingly cruel edict most likely save his life, it also saved the 79 photographs he took of life aboard Titanic.

We had the opportunity to see replicas of two of Titanic’s cabins. The third class cabin had bunks for four, six or eight passengers, with running water and electricity. Many of these third class passengers didn’t have these modern luxuries at home.

Two day rooms were available for the use of the 700 third class passengers, along with two gender-specific bathrooms. As was common practice in those times, these passengers’ movements were severely restricted aboard the ship.

Titanic was one of the first ocean liners to provide three meals a day and bedding included in the third class ticket price. The menus were basic, but substantial, and the day rooms saw much dancing and loud chatter.

The first class suites were enormous, with sitting rooms, bedrooms, private baths, marble fireplaces and were lavishly decorated in several popular styles. The dining room seated 500 and spanned the width of the ship.

Replica of a First Class Suite Aboard Titanic at the Titanic Experience in Cobh (©simon@myeclecticimages.com)

An Example of a Typical First Class Lunch Menu that had been Prepared for Titanic (©simon@myeclecticimages.com)

Following our guided tour, we took our time exploring the Titanic Experience exhibition area. The displays were interactive, featuring an array of attention-grabbing audio visual presentations and story boards.

Display of Artifacts Relating to the Titanic Including an Original Chair from the Carpathia (©simon@myeclecticimages.com)

I found the exhibits and presentations on the role of the merchant ship Carpathia, the ship that came to the rescue of Titanic’s survivors, particularly interesting. The story was told by a sailor on the Carpathia. He described Titanic’s distress call, the treacherous iceberg-dodging journey to the site of her sinking, and the rescue of her 705 survivors. A chair from Carpathia was on display as a reminder of the ship and her story.

Also in the exhibition area was a series of aroma pots. When we lifted the lids, we caught scents likely to have been experienced by the passengers on Titanic. Examples included a smoking room, gymnasium heat rub, the bakery, and brandy in the first class lounge.

Other exhibits showcased the 1985 discovery of Titanic’s wreck, 2,500 feet down on the ocean floor. and the salvage operations that followed. Also, the results of the American and British inquiry into the tragedy gave us pause..

In the story room, just before we left, we learned the fates of those whose boarding passes we held. Lillian and Edward survived, but Andrew (Simon) did not. It hit me then how many of the women aboard Titanic jumped into lifeboats with their children, leaving their husbands behind to face a watery grave. I didn’t think I would find a new perspective on Titanic that would tear me up, but I was wrong.

No, Titanic Experience isn’t exactly a jolly way to spend an hour or two, but it is well worth it. If you think you’ve seen and heard it all about Titanic, take a trip to Cobh and prepare to be fascinated.

Allow at least an hour to reap the full Titanic Experience; and more if you, like yours truly, are a confirmed Titanic junkie.

When you reach your saturation point, Cobh is a delightful town for wandering, and the people are genuinely friendly. You can walk up the hill leading to the cathedral to take in a view of the surrounding area. And then, there are always charming local pubs to quench your thirst.

One of the Streets Running from the Waterfront Towards the Cathedral in Cobh (©simon@myeclecticimages.com)

Titanic Experience is accessible with ramps and an elevator. Quite impressive for a hundred plus year old building.

Part 1 of this two-part series featured Titanic Belfast in Northern Ireland, located on the very spot where Titanic was designed, constructed, and launched. This magnificent attraction factually and poignantly tells Titanic’s story from her three-year-long construction in Belfast to her horrific end in the icy North Atlantic.

Disclaimer: We were generously hosted by the Titanic Experience. However, all opinions, as always, are entirely my own.