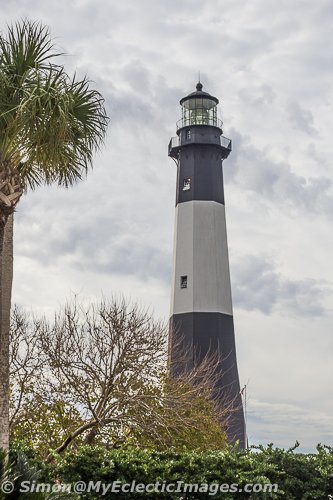 A Centuries Old Symbol of Survival.

It was 178 steps up a spiral staircase to the top of the Tybee Island Lighthouse and a WOW of a view. But the story of this 18th century structure is a WOW in its own right.

Tybee Island, GA, approximately 20 minutes east of Savannah, is one of those places that seems to be a misfit in today’s world of violence, stress and fear. Once you cross the bridge from Savannah, you’re on Tybee Island time. The pace is slower, the people are friendly and the loudest continuous sound you’ll hear is the crashing of ocean waves on Tybee’s soft, sandy beach. Of the many must-dos on the island is a visit to the historic lighthouse that has guided ships entering the Savannah River since its original construction in 1736.

Simon, Otto and I arrived late on a day that had turned from sunshine to impending rain. As policy dictates the lighthouse be evacuated and closed during stormy weather, time was of the essence. The logical course was to climb to the top while the climbing was good.

Unlike other lighthouses I’ve climbed, the stairs were even with a landing every 25 steps. The down side was that the stairs were open with one handrail on the lefthand side on the ascent. Needless to say, Otto was less than enthusiastic about this plan, and his reluctance was understandable. Fortunately, a staff member offered to look after Otto while Simon and I climbed up to the top.

Despite the thick cloud cover, a spectacular panoramic view greeted us at the end of our climb. Savannah was visible in the distance, and the beach view of breakers hitting the shore was hypnotic. Far below us, we could see Otto stretched out on the ground, being spoiled rotten. On a clear day, the sunset is reputed to be exceptional, but we’ll have to come back another time to check it out.

As we moved around the tower, Simon snapping photos all the while, I couldn’t help remembering the beating nature had inflicted on the lighthouse over nearly three centuries.

View from the Top of the Tybee Island Lighthouse

James Oglethorpe, Governor of Georgia, the 13th Colony, commissioned the first incarnation of the lighthouse in 1736. It was constructed of wood, and fell victim to a severe storm a mere five years later. The lighthouse was rebuilt the following year. An expensive lesson having been learned “Three Little Pigs” style, stone and wood were used to replace the original structure. Like its predecessor, this lighthouse had no illumination, but was topped by a flag pole. This time, it was claimed by shoreline erosion.

In 1773, a third tower was constructed of brick, which loomed 100 feet over the island. A system of reflectors and candles provided its earliest form of illumination. By the time ownership of the lighthouse passed to the government of the United States of America in 1790, oil lamps were lighting the night.

The tower was fitted with a Fresnel lens in 1857. But in 1862, during the Civil War, the lens was removed by Confederate forces, who burned the lighthouse as they retreated to Fort Pulaski.

A cholera outbreak halted the tower’s reconstruction in 1866. The first 60 feet of what remained of the octagonal structure received a new addition, increasing its total height to 144 feet. This incarnation was outfitted with a more modern lens than those confederate boys purloined.

A hurricane in 1871, caused serious cracking in the brickwork. Then the 1886 earthquake that devastated Charleston, SC, damaged the lens and caused the brickwork to crack even further. But everything man and nature threw at the lighthouse was quickly repaired.

In 1933 electricity was brought to the tower, and in 1972, the beacon was automated.

The Tybee Island Historical Society, took possession of the property, and in 1999, embarked on a major restoration project which included repainting the tower in the black-white-black day mark we see today.

Lighthouse Keepers Cottage and the Lighthouse

Also on the property is the Head Keeper’s Cottage, which we were able to visit before closing time. Based on a short video we had seen before making our way to the cottage, we knew that a family of six had lived there in the 1930s, and the adult children had donated original furniture and personal items so the public could form a clear picture of their lives.

The kitchen had a stand-alone sink, a small eating area and a hole in the floor covered with plexiglass. Looking down you could see the cistern that provided water for bathing, cleaning and washing clothes. This water was not used for drinking.

Up the narrow staircase was the second level where two bedrooms had been occupied by the two girls and two boys who grew up in the house.

There was a single bathroom on the downstairs level, and it’s a safe bet that there was no wifi. But based on the narrative in the video by the lighthouse keeper’s youngest daughter, the family was happy living on Tybee Island. After all, how many kids could say they had a functioning lighthouse in their backyard?

Your lighthouse ticket also gains you entrance to the Tybee museum, located in Battery Garland of Fort Screven. The museum was established in 1961 in order to offer visitors the opportunity to experience Tybee Island’s rich history.

Built between 1898 and 1899, Battery Garland. was home to a mammoth 12 inch “non-disappearing” rifled long range cannon. Today, the walls contain seven rooms housing exhibits of artifacts dating back over five centuries of Tybee Island history. Time didn’t allow us to visit the museum, but this gave us just one more reason to return.

The lighthouse is located on the northeast end of Tybee Island, and is one of only seven remaining colonial era towers. Despite repeated destruction and reconstruction, the Tybee Island Light Station is one of the most superbly renovated structures of its kind on the continent. With all of its historic support buildings kept intact on its five-acre site. The lighthouse proudly casts light from its nine-foot tall First Order Fresnel lens as far as 16 nautical miles over the dark waters. And that’s a WOW if there ever was one.

During our stay on Tybee Island, we were guests of Visit Tybee Island, Visit Savannah and Hotel Tybee. All opinions, however, are entirely my own.

The tours of the Lighthouse and Head Keepers Cottage are self guided, but friendly and knowledgeable volunteers are available to answer your questions.

For more information, or to reserve tickets, call (912) 786-5801 You can learn more about the Tybee Island Light Station by visiting its official website.