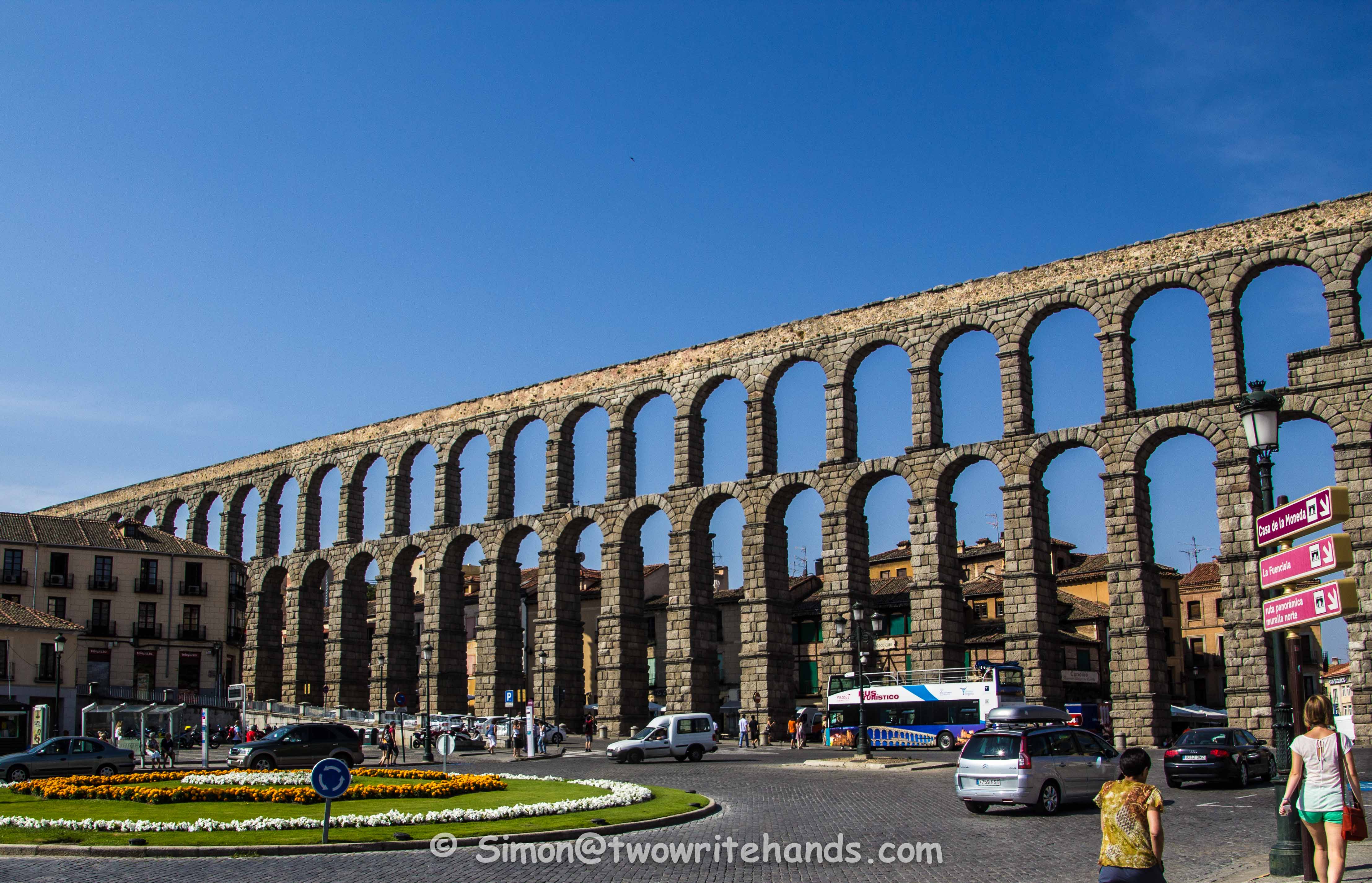 On a low ledge at the base of an enormous stone block pillar, I sat, checking my iPhone for email, while a light breeze provided occasional relief from an unsympathetic sun. At my feet, Otto lay on his back, waiting for me to finish, so he could receive the belly rubs to which he felt entitled. A few feet away, Simon also lay face up on the grass under a powder blue sky, intently studying the interior of his eyelids. This could be a scene from a rather ordinary summer day, but it was anything but ordinary. This was a definite WOW experience. 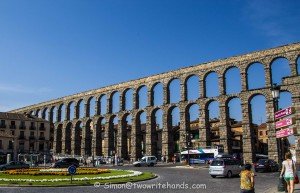 The Roman Aqueduct in Segovia, Spain

We had just spent a fascinating day exploring the history-rich Spanish town of Segovia. So what better way to spend some down time before catching our train back to Madrid than communing with a Roman aqueduct. The stone pillar against which I leaned just happened to be a small part of a colossal system built by the Romans in what experts estimate to have been around A.D. 50.

The aqueduct carried water from the Fuente Fría river, in the nearby mountains, to Segovia, in the Castile-Leon region of Spain well into the 19th Century.

This feat of engineering towers majestically above Segovia’s ancient monuments, historical sites and newer structures as it crosses the city from end to end. The double and single arches that support the U-shaped channel that transported the life-giving water, show off a striking combination of beauty and practicality.

“There is a legend – not a Roman one, to be sure – that Satan, in an effort to secure the soul of a young maid, built the aqueduct, also known as “Puente de Diablo” (Devil’s Bridge), in one night. Of course, he blew it, because he was one stone short of an aqueduct when the sun came up. 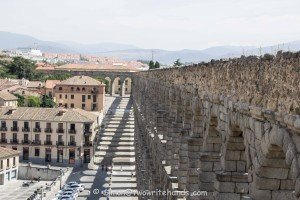 Shadows Cast by the “Devil’s Bridge”

We had stationed ourselves in an area within view of the Azoguejo square, where the aqueduct is at its highest, rising 93.5 feet into the air. This is the point where this ancient marvel dwarfs everything around it with its magnificent pillars and arches that stand starkly against the backdrop of an ever-changing sky. 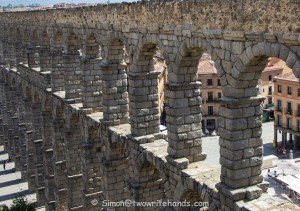 Details of the Upper Arches of the Aqueduct in Segovia

Naturally, I had to explore my personal pillar. Walking around the rectangular base, gave me a sense of how large it was. How large was it? I have no idea, but it was definitely much larger than any pillar I’d ever seen. The stone was rough and pitted in places, but considering it’s age, the fact that it was standing at all was mind-boggling. Besides, I’m sure it has been out of warranty for some time now. 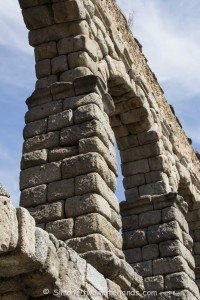 The aqueduct was constructed with granite blocks, but neither cement nor mortar were used to hold the stones together. The reason the aqueduct has remained standing for nearly two thousand years is that the Roman engineers used an amazingly clever technique based on balancing forces. I wonder if people dared to tell engineer jokes back in Roman times.

Simon did a stellar job of describing the pillars and the way the double arches were situated between them. What I believe to be an accurate picture formed in my mind as he spoke, and the Roman aqueduct of Segovia stands there today, making me say “WOW” all over again.

To learn more about Segovia’s Roman Aqueduct, a Google search is your best bet. There is a great deal of information, but no one site has it all.