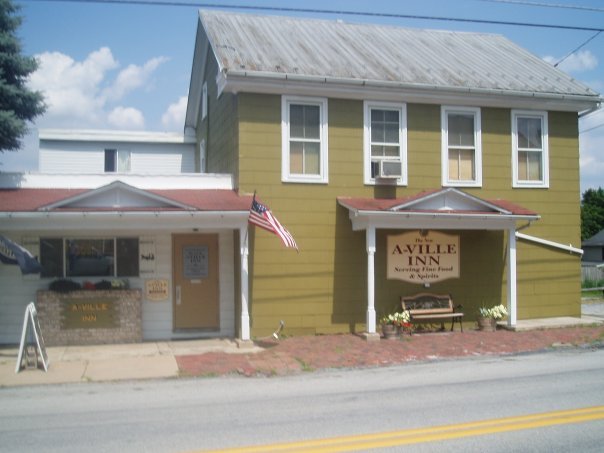 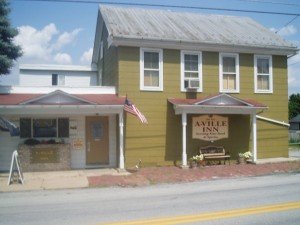 We were in The N.E.W. A-Ville Inn, in search of a lead to some good Pennsylvania moonshine, but what we found was a WOW of a different kind.

On our last full day in Gettysburg, PA, Simon, Otto and I found ourselves in an area of southern Pennsylvania where fruit orchards abound, and wineries are becoming a fast-growing industry. After spending the last day and-a-half immersing ourselves in the history of the bloodiest battle of the Civil War, we were ready to cut loose.

We visited two wineries, then drove to The N.E.W. A-Ville Inn in Arendtsville for dinner. The day before, it was suggested to us, by someone who will remain nameless, that the moonshine in these parts was something special. He also suggested that one of the Arendtsville locals might be able to help us find some.

Since we were told by more than one person that the food at A-Ville was home cooking at its best, we decided to try our luck there. But we hadn’t been seated more than five minutes when the moonshine plan was scrapped.

An elderly gentleman sat down at a nearby table, and our waitress went directly to him, and asked, “Are you hungry? Can I fix you something to eat?”

It was obvious that this man was a regular, but there was something unusual about the interaction we had witnessed. The bearded man was very polite, but seemed to be hard of hearing.

As we ate our dinner, washed down with some very good local beer, we saw the man finish his meal and leave. Our curiosity got the better of us, so we asked the waitress about her unusual customer.

“Oh, that is “The Mayor”.” she answered. At our blank expressions, she continued. “He’s 87, and we call him The Mayor. He’s a widower, and we all look out for him.”

We had no idea if he paid for his meal, or if he had an account. What struck us was that we had just stumbled upon a town with a heart. It was a place where neighbors took care of those in need: hard-working folks loved their agricultural lifestyle, and each other.

Arendtsville is just 8 miles northwest of Gettysburg with a population of approximately 1,000. The folks we met were friendly, chatty and helpful. Several patrons at the bar fell into a good-natured disagreement as they tried to show us the best way to get back to Gettysburg. Despite the fact that no consensus was reached, we were able to successfully piece together a route back to our hotel.

The restaurant itself was less than spectacular on the outside, but appears to be a favorite of the locals who farm the land and make the wine. The food, on the other hand, was first-rate.

Simon had the Hog Wings: meaty pork shanks with the meat pulled back, so you could pick them up in order to eat what ever meat didn’t fall off the bone. They were fork-tender and delicious with a slightly sweet-spicy chipotle sauce.

I had the Cuban sandwich, and it, too, was amazingly good.

The fries were made with the skin on. What they lacked in crispness, they made up for in tenderness and flavor.

I had a pumpkin ale that was light and refreshing, while Simon had an OktoberFest stout that was more robust and had a strong hoppy flavor. We splurged and had the apple pumpkin pie for dessert. This turned out to be a deep-dish pie with a thin pumpkin layer, topped with a generous amount of spiced apples and a crumb topping. It was definitely worth the extra calories. Besides, it counted as both a fruit and a vegetable.

Our waitress came to help her cousin run the restaurant after the death of her aunt. Referring to her kindness to “The Mayor”, she said that it’s what her aunt would have wanted.

Our quest for moonshine will have to wait. These folks have no reason to trust us, but maybe if we come back, as we hope to do, we will be able to earn their trust. Meanwhile, we took away something far more important: the knowledge that small communities can thrive without losing the values that seem to have been left behind in larger towns and big cities. To know that values that are important to many of us, and for which we yearn, are still alive and well in Arendtsville, PA. The atmosphere and actions we witnessed at The N.E.W. A-Ville Inn are worthy of a respectful WOW!

If you want to get a great, reasonably priced  meal served up with friendly company, I highly recommend The N.E.W. A-Ville Inn.