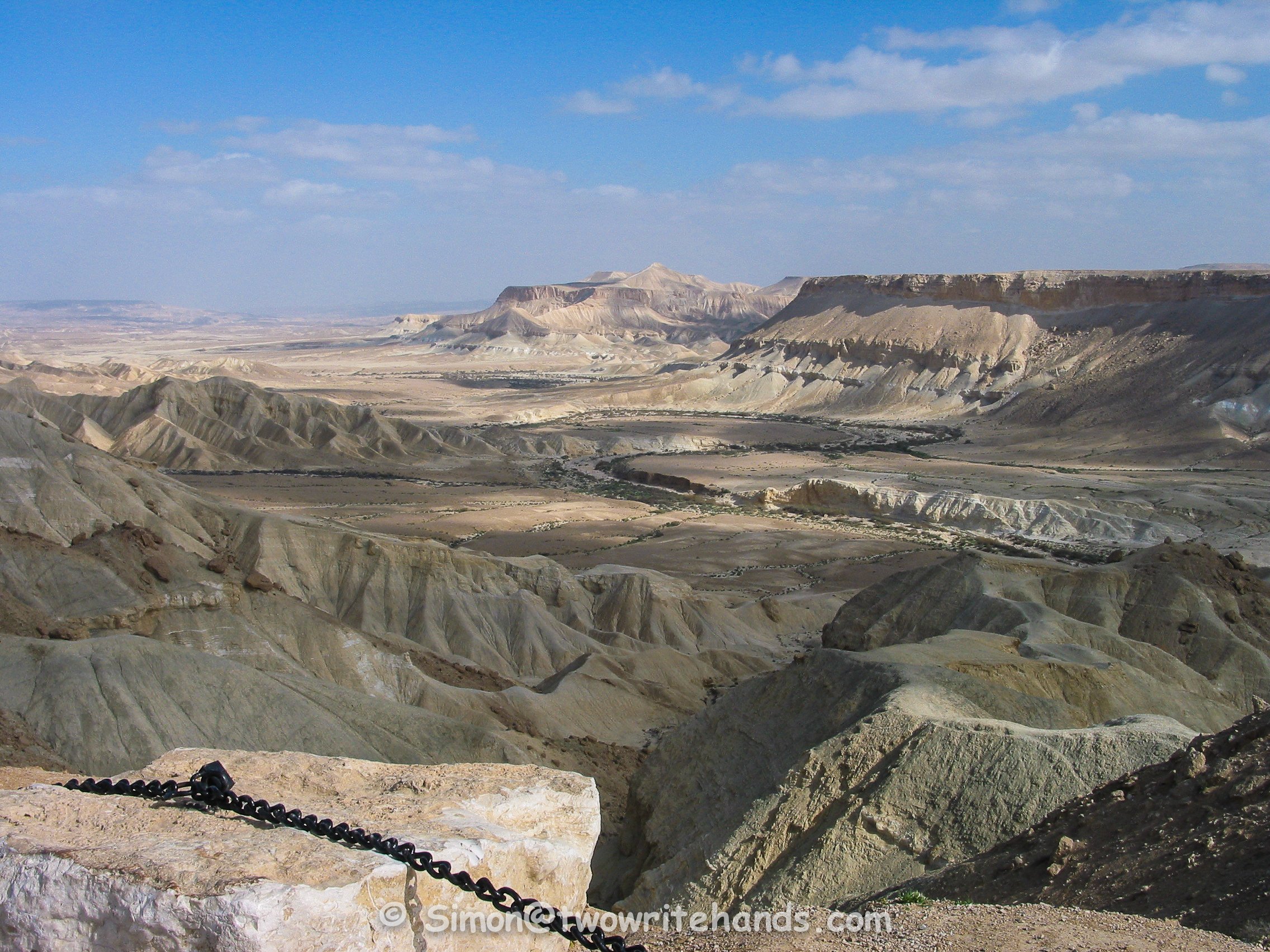 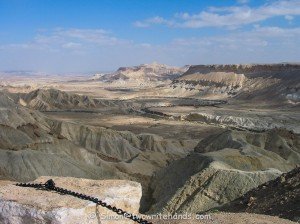 A View of the Ramon Crater Near the Grave of David Ben Gurion in Be’er Sheva,

Think of an enormous asymmetrical hole in a desert that looks less desert-like with every passing year, and you’ve got a geological WOW called the Ramon Crater.

When Simon, Otto and I visited my family in Israel in 2013 we saw many exciting and mind-boggling sights, but on our second venture into the Negev Desert, we found something completely different from anything we had previously experienced.

The Ramon crater is 25 miles long, 1640 feet deep and up to 4 miles wide. It is a part of the Ramon Nature reserve, the largest in Israel, which includes the Negev mountains surrounding the crater. 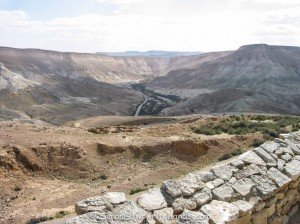 A View of the Ramon Crater from the Visitors Center

The small town of Mitzpe Ramon is the only settlement in the area. It has a visitors center and an observation point, overlooking the stunning view from the northern ridge of the crater.

It would be logical to conclude that this Grand Canyon of the Middle East was formed by a big, bad meteor, but, like the land in which it lies, the formation of the Ramon Crater is far more complex than a sucker punch from the sky.

Several hundred million years ago the Negev was covered by ocean, which began to move north. A few million years on, rivers began to change their course, carving out the inside of the crater. The result was a magnificent combination of form and color that blend to make this crater the geological and archeological treasure trove it is today.

My cousin and his wife had wisely taken their Jeep for this excursion into the bowels of the desert, so down into the crater we drove. The road to the floor of the crater was long and twisty. On our way down, we stopped several times to examine unusual rocks and saw sand in a variety of colors; red, yellow, green and more. The sand had been tinted over time by the mineral deposits that are present in the ground. 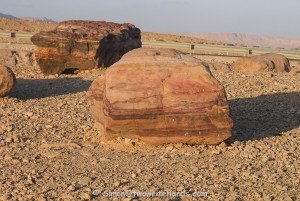 Occasionally we strayed from the beaten path in order to see areas not frequently visited by tourists, and as bumpy as the terrain was, it’s hardly surprising. Needless to say, we were glad we were in a vehicle that was suited to the task.

By the time we reached the floor of the crater, it was growing dark, and we walked through the only camp site in the crater. Vacationing families were enjoying the cooling air and cooking their dinners. The light breeze surrounded us with the heavenly aromas of grilling lamb, vegetables and other goodies. Children ran and played, women chatted, and God only knows what the guys were up to. All in all, it was a typical evening in a crater. And what a WOW of a crater it was!

The Ramon Crater is a story of a remarkable landscape that is well worth exploring both on the internet and up close and personal.