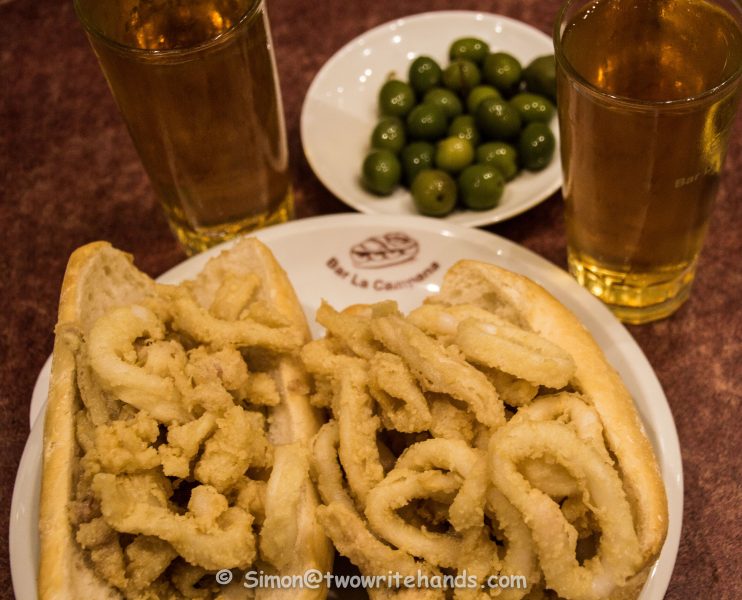 Calamari (deep-fried squid) is one of those foods that has no middle ground. For most, it’s either an emphatic “yuck”, or a definite WOW

Using the above logic, Bar La Campaign in Madrid is either a place you will choose to pass by, or deliberately seek out. This is because, although there are other offerings, the bar’s signature dish is a big, fat, authentically Madrid calamari sandwich.

Simon and I are both lovers of calamari, so when Tatiana, our Madrid walking tour guide pointed out the only bar she would recommend because of it’s amazing and reasonably priced 2.70 Euros (around $4 US) calamari sandwiches, we took note of the location.

We didn’t get to the bar until mid-afternoon, but it was crowded nonetheless. The lower level, where the bar and two commercial deep fryers stood was completely full, so we went up a short flight of stairs and found a tiny table with two chairs. 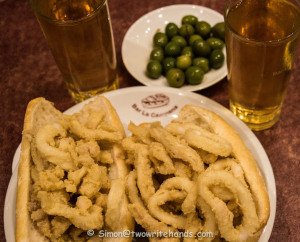 Looking around, all Simon could see was people working their way through bocadillos (giant bread rolls) piled high with calamari. So, when in Madrid…

While Otto and I guarded our precious piece of bar real estate, Simon went downstairs to “hunt and gather”. Returning a surprisingly short time later, he set down a two plates and two glasses.

One of the plates held an assortment of green olives, while the other contained both our sandwiches and two packets of mayonnaise. The glasses were filled with hard cider..

Okay, I’m making it sound pretty awful, but what we had for lunch that day was akin to a Mediterranean cruise for our taste buds.

The bocadillos were piled so high with calamari that you couldn’t squeeze the two halves together to even attempt to take a bite. What to do? Since we had no forks, and have no class, we did what came naturally: just started picking off pieces of those hot, fresh calamari and making them disappear. It was unusually tender – something Tatiana mentioned – and nothing like some of the rubbery abominations I’ve tasted at the hands of cooks who didn’t have a clue how to treat this treasure from the sea. Also, the batter was very crisp and light, so those delicious morsels were actually half naked. The flavor was subtle, blending with the perfect texture to make each bite WOW-worthy. By the way, we did have enough class to totally ignore the mayo.

Once we reduced the mountain of squid enough to eat it like a sandwich, it was too late. We were so full, that we went back to picking after just a couple of bites. I will say, though,  that the bocadillos were fresh, firm and had a tender crust.

As for the cider, it had a dry-fruity flavor that turned out to be an ideal accompaniment for the rich calamari.

The building housing Bar La Campana opened in 1870 as a winery called Bodegas Sierra. From the outset, squid has been served consistently to hungry patrons. Bulls were also kept on the property when bullfights were still held in the adjacent Plaza Mayor.

The building was renovated in 1998 and “renamed Bar La Campana. Thankfully, the bulls and the bull fights are gone, but the calamari sizzles on.

When Simon and I are next in Madrid, calamari at Bar La Campana will be a definite “must do”. As for Otto, he will probably be just as glad to return, because the floor will no doubt once again be strewn with bits of dropped calamari and bread. As hard as I try to keep my normally well behaved guide dog from picking up food from the floor, he is sometimes too smart for his own good. It’s quite likely he found himself a small tidbit or two while we were lost in calamari nirvana.

Did he like it? Well, if Otto could talk, he would probably give Bar La Campana a resounding bow-WOW!