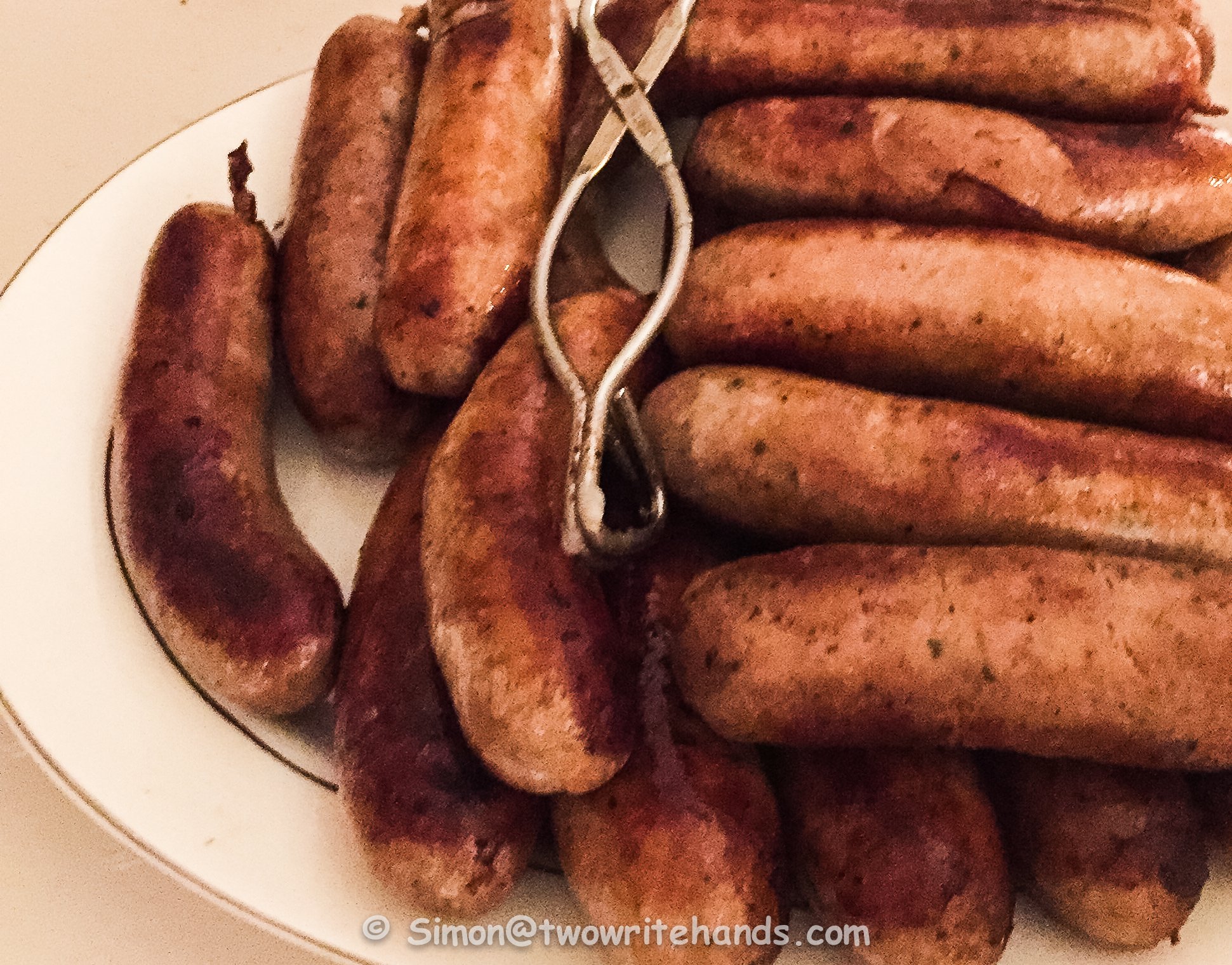 Evolution of a Family Christmas Tradition

My first Christmas in England with the in-laws was fun, festive, interesting and only a tiny bit stressful. Having grown up with no Christmas traditions of any kind, I was eager to embrace those of Simon’s family, including the set-in-stone bangers and mash (sausages and mashed potatoes) on Christmas Eve. But it was the story of how this tradition got started that WOWed me.

My prior visit to England was in summer, so I wasn’t prepared for the cold, damp weather that enveloped us for three weeks. Add to this a hefty dose of fog, mist and rain, and I was convinced that the Brits had misery down to a fine art. But what the Christmas visit lacked in physical comfort and joy, it made up for in welcoming warmth, love and laughter.

That year, Christmas was spent at Simon’s sister and brother-in-law, Christina and Peter’s house in the tiny village of Haddenham roughly 50 miles west-north-west of central London and approximately 20 miles east of Oxford. For one thing, they owned the only domicile large enough to accommodate Simon’s parents, younger sister, her boyfriend and us. For another, Christina and Peter had a toddler and one almost ready to pop. 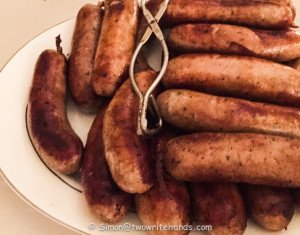 On Christmas Eve, we sat down to a meal of English bangers and mash, which had been a family tradition on Simon’s father’s side since the late 1800’s. It seems that back in the day, the family had servants, who were given Christmas Eve off, so they would be available to cook and serve the following day.

The lady of the house, not accustomed to meal preparation, made the simplest – and maybe the only – meal she knew to feed her family on Christmas Eve.

At first, there weren’t even any vegetables to accompany the two Christmas Eve staples, however, with the combination of no more servants, better cooks and an increasing awareness of nutritional requirements, the lowly bangers and mash began to evolve. Vegetables, fruit, homemade baked goods and a cheese course were added.

On that side of the pond, Christmas is still a family affair, much like that first Christmas in 1978.

Once we had our own children, we have never been away from home on Christmas Eve. Since we had no relatives on this side of the pond who celebrated Christmas, our close friends became our family.

While living in Knoxville, TN, we began inviting friends to join our family of four on Christmas Eve. Of course, we prepared the traditional meal, but added Ipswich Swizzles (one part dark rum to two parts cranberry juice, served with a lime wedge) as our Christmas cocktail, and Nouvelle Beaujolais as our traditional wine.

When we moved to Atlanta, be began gradually adding more friends to the Christmas festivities. Our last Christmas Eve in Atlanta saw 11 people squeezed around our dining room table. That was the year Simon made an extra table leaf to add to the already existing ones, which was cleverly disguised by a thick tablecloth.

After our move to New Bern, we dropped the cheese course, and add an appetizer or two to go with our Ipswich Swizzles. Last night, our table seated nine instead of 11, because of the contagious nature of a friend’s temporary illness.

There were two appetizers, peas with celery and olives to accompany the bangers and mash, and a selection of my baked goodies served with clementines for dessert. 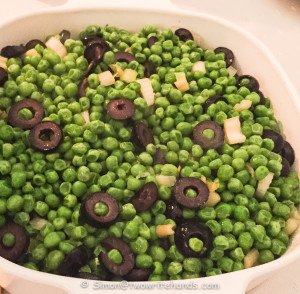 Peas with Olives and Celery 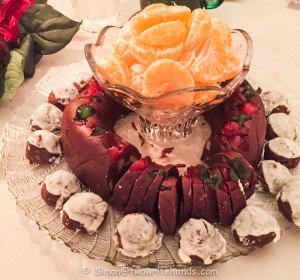 One of Several Different Dessert Platters

This has been typical for the last three years, but this year, we’ve begun a new tradition. You see, as simple as bangers and mash are to prepare, the challenge has always been finding authentic English bangers. These pork sausages have a slightly courser texture than our standard mass-produced supermarket mush-in-a-casing. The taste is mild with a tiny hint of pepper, and subtle flavors of mixed herbs. And you should be able to identify the distinctive flavor of sage without it shocking your taste buds.

There were many years when we’ve had sub-standard replicas of the real deal. And there were several years when we served Italian sausages, chicken sausages, and other symbols of desperation when we couldn’t even find the fake bangers. But the results were always disappointing. The so-called English bangers were either too dry, lacked the proper amount of sage or on a couple of occasions Simon over baked the pathetic offerings that we had obtained.

So, a couple of weeks ago, Simon, with the help of our friend, Bob and his sausage maker, produced the bangers from scratch. Simon found and refined a recipe he located on the internet, bought a whole pork shoulder and had the meat ground by the supermarket butcher.

Instead of baking the sausages, he boiled them, then lightly fried them. Everyone agreed that those bangers were the best ever in consistency, juiciness and flavor. At long last the perfect banger on this side of the pond was born.

Christmas morning, we learned that the new tradition will, in the future, be easier to accomplish than we thought. My Christmas present from Simon and the boys was a long yearned for heavy duty stand mixer. Knowing what my gift was going to be, and learning about his father’s sausage-making exploit, Kevin gave Simon the grinder attachment, complete with sausage extruder.

Although foods have been added, subtracted and moved around, bangers and mash are still the central theme of Christmas Eve in our family.

I asked Kevin if he planned to continue the tradition after Simon and I have gone from this earth. Of course,“ he said without hesitation. And so this family tradition, with its humble beginnings, will go on. WOW!

Wishing all my readers a safe and joyous holiday season. As an extra bonus, the recipe for bangers can be found at The Paupered Chef. The recipe for easiest garlic mashed potato that I made at both Thanksgiving and again for our Christmas Eve feast was courtesy of Pinch of Yum. Enjoy!