[Weekly WOW #020] The Pyramid of the Magician at Uxmal: 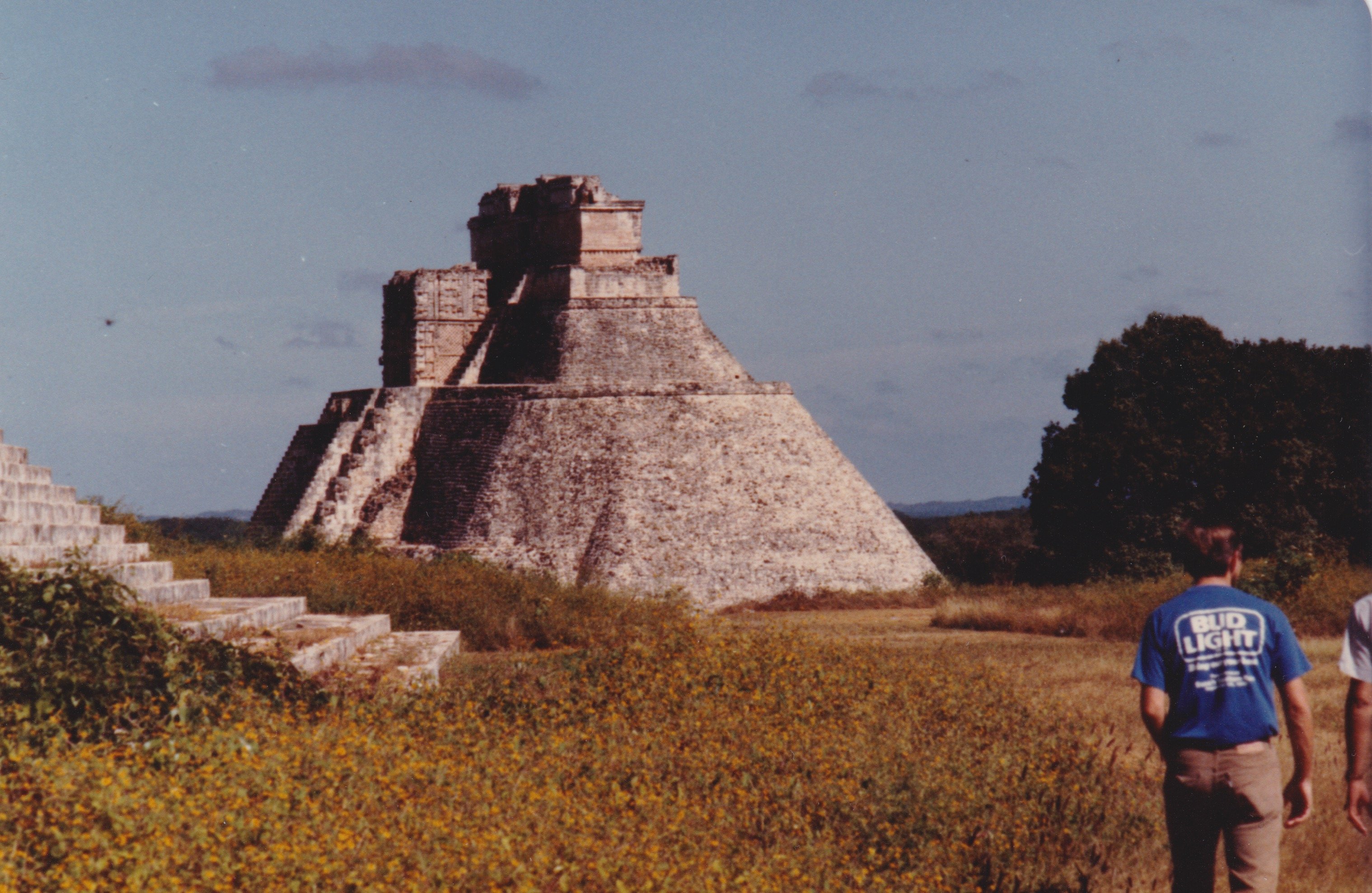 Taking It One Step at a Time 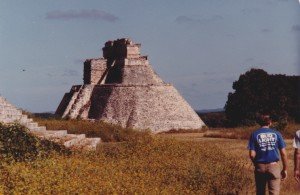 Pyramid of the Magician

It was only 90 steps to the top of the Pyramid of the Magician, but they were very steep, I’ve always been uncomfortable with heights and there was my unborn child – in the process of becoming Gary – to consider. Still, I couldn’t resist climbing to the top for a WOW of a view.

It was December, 1982, and Simon and I were on a tour of Mexico’s Yucatan Peninsula. Kevin, then a toddler, and Regal, my first guide dog, were safe at home with my parents in Knoxville, Tennessee.

We were traveling with a group of architecture students and non-students that ranged in age from 11 to mid-seventies. A good friend, who was a professor of architecture at the University of Tennessee in Knoxville organized the tour as an opportunity for his students to experience Pre-Columbian, Mayan architecture first-hand. For the rest of us, it was an opportunity to spend 10 days enjoying ourselves, learning about Mayan culture and history and having a couple of days on the beach in Cancun before heading home.

We had flown into Merida, Yucatan’s capital, and immediately piled onto a bus that took us 40 miles southwest to the ancient Mayan city of Uxmal. As we drove, our guide, Vicente, gave us a brief rundown of what we would be seeing and doing.

We arrived in the late afternoon, settled in at the hotel and had dinner. For me, it was chicken soup, being concerned about what might harm my soon-to-be Gary, almost everything I ate on that trip had been cooked to death. That didn’t mean it wasn’t good. The soup had lots of chicken chunks, along with avocado and a few other things I couldn’t quite identify. But the flavorful broth and its contents hit the spot with no ill effects for either Gary or me.

After dinner we climbed up to an outdoor theater, where a haunting sound and light show was performed. This was also our introduction to the tallest structure in the city, the Pyramid of the Magician.

As the story of 8th century Mayan trials and triumphs were displayed and spoken, colored lights illuminated the pyramid and its surrounding structures.

There are almost as many legends surrounding the naming of the pyramid as there are steps to the top. Stir them all together, boil them down and you have a story of a wizard, who was hatched from an egg,whose mother was a witch. He grew up and through bribery, threat of death or because he just plain felt like it, built the massive structure in one night.

The following morning, we toured Uxmal and learned its history.

Building of Uxmal is estimated to have begun early in the 8th century, reaching its peak some time during the 10th century, and abandoned in the middle of the 15th century.

Of all the preserved structures – the Governor’s Palace, the nunnery, the Ball Court – the Pyramid of the Magician seemed to draw me in. Whether it was its height of over 100 feet, the carved heads of the rain god, Chac that dominated its façade or the promise of a spectacular view that called me, I just had to climb those steps.

For me, moving just outside of my comfort zone had become a way of life. After all, my reasoning goes, how else can I grow as a person, and what can I teach my children about embracing life? 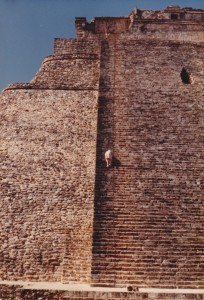 Climbing the Pyramid of the Magician

So, I put one foot on the first step, then the other on the second. That was easy, so I climbed a few more steps, knowing that turning back was always an option.

The climb, once I really got moving, was fairly easy, and took no time at all.

The challenge came when I reached the top. I got down on all fours and crawled to a point where it felt it was safe to stand without toppling over the edge.

The view was magnificent. Although I was in the middle of a phase of accelerated retinal deterioration, I could still see the outlines of structures visited earlier that morning. I could have stayed there all day; partly because of the view, and partly because I hadn’t yet figured out how to get down. In fact, had I stopped to wonder how this was going to be accomplished, I never would have gone up there in the first place.

Okay, setting up camp for the rest of my life wasn’t an option. Besides, there was Gary to consider. What kind of example would I be setting to him and Kevin. And, of course, I wanted to see Kevin again. Love of family won out.

Crawling to the edge, I realized that the easy climb of a few minutes earlier was now an almost sheer drop to the ground. Fortunately, there was a chain that hung down from the top of the pyramid to the bottom to assist wimps just like me. I’m not sure how I managed to get both feet on the step, but, with the help of that chain, I was over and on my way down, moving backwards all the way, just like most of my fellow tourists. This made me feel less wimp-like until Andrea, one of the students in our group passed me moving at a fair clip, face first.

“Do you need any help?” she asked as she drew level with me.

No thank you,: I answered mustering what was left of my dignity, “I’m getting there .”

That trip to Yucatan as a whole, and the Pyramid of the Magician in particular will always hold a special place among my most WOW memories.