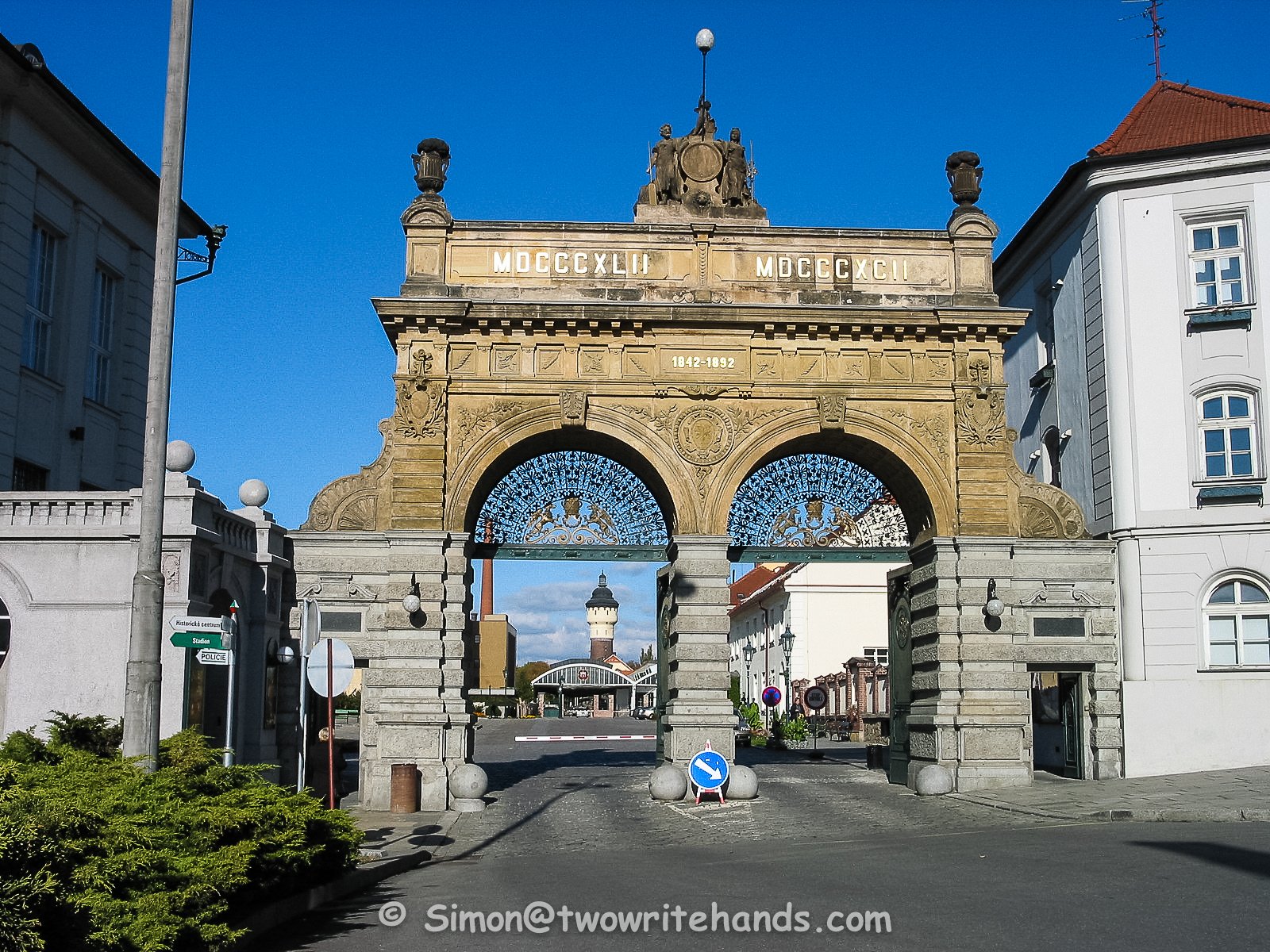 The Origin of Liquid Gold 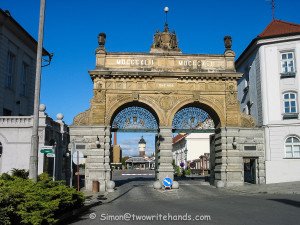 Entrance to the Brewery

Standing in a medieval cellar, surrounded by oak barrels, each containing some of the finest and best-known beer in the world, I accepted the plastic cup I was offered. First I sniffed the “hoppy” smelling contents, then tasted. WOW!

That’s right. I’m writing about libations again. It may seem as though all I do is drink my way around the globe, but the production and consumption of potent potables are an integral part of most nations and cultures. It would not be doing the places I visit justice without sampling first-hand such important aspects of a country’s regional and national character. Well, that’s my story and I’m sticking to it.

In October of 2003, Simon, C.J. and I were in the Czech Republic as part of our 25th anniversary trip. Simon had treasured memories of visiting his grandparents as a child, and the plan was, among other things, to revisit some of the places he had enjoyed.

The city of Pilsen (the Czech spelling is Plzeň) held a special place in his heart, and it wasn’t only because of the world-famous Pilsner Urquell beer. This was where his mother was born and grew up.

Although Pilsen is a WOW of a city in its own right, the Plzeňský Prazdroj brewery was our primary goal for this day trip by train from Prague.

Enter the brewery’s campus through one of two arches, and the visitor’s center will be on the left, and a pub – the largest in the Czech Republic – on the right. Depending on the time scheduled for your tour, you can choose which one you want to visit first.

We headed for the visitors center, and immediately ran into a brick wall, figuratively speaking. We were greeted by a polite, but insistent employee, who firmly told us that C.J. could not accompany me on the tour. She was certain that the fact that food was prepared and served on the premises trumped any exception for service animals.

After pointing out that we had been accepted in restaurants without difficulty, the woman disappeared. A few minutes later, she returned with a complete turn-around in attitude, and everything went smoothly for the rest of our time at the brewery.

Pilsen was born as a town in 1295, where the rivers Úslava, Úhlava, Radbuza and Mže meet. The town’s location on that particular spot sprang from the wisdom – and obvious goodness – of Wenceslas II, the King of Bohemia. Since then, Pilsen has grown and become a busy center for trade.

Tremendous growth was in full swing during the 19th century when 36 barrels of “bad” beer were unceremoniously emptied in front of Pilsen’s town hall. This act of frustration and defiance led to the construction and opening of the “Citizens Brewery” in 1842, and the creation of the Pilsner Urquell. This new “kid on the block” gained it’s star quality from the naturally available soft water, Saaz hops, a lighter malting process and yeast that was allegedly smuggled from Germany.

The resulting beer was completely different from any other brands available. Pilsner Urquell was heralded as a new type of beer. Today, Pilsner beers make up more than 70 percent of all beers sold world-wide.

By 1856 Pilsen beer was making its debut abroad, And in 1874 it became available in the United States.

There are several brewery tours from which to choose. Depending on your tour, you might see the museum, which is located in an authentic 15th century brew house. There you will learn about the long history of the city, the role of the guilds, how the beer brewing industry developed over the centuries and the evolution of the hospitality industry.

There are fascinating collections of tin, glass and ceramic beer steins, as well as bottles and other items to peruse. 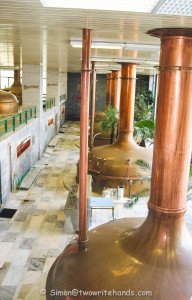 Visit the malt house with its copper-topped vats, the rolling room, the laboratory and the cellars that house the oak barrels and the enormous stainless steel vats of Pilsner Urquell. 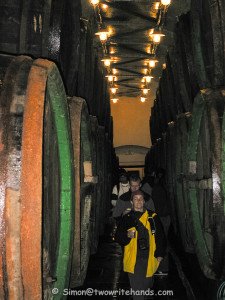 Hundreds of Large Oak Barrels Provide Storage for the Beer

This is where we sampled the unfiltered Urquell drawn directly from the oak barrels. The pour was a generous one, and we were invited to walk and sip, while we explored the cellars. 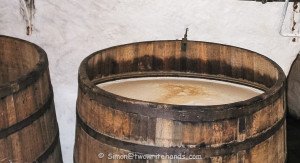 Since this was not my first Pilsner rodeo, I sipped slowly and, for the first time, really took note of what I was tasting. The flavor was malty, but softened by the water used from the brewery’s artesian well. And, of course, there was the trademark golden hew. 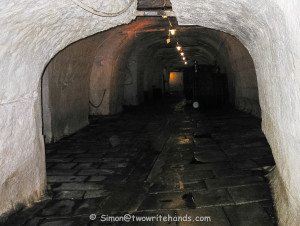 One of Many Cellar Passageways

There was much to learn about the history and process of making Pilsner Urquell. But the most important lesson for me was that familiarity can often breed indifference that is undeserved. In the years since our visit to Pilsen, I have learned to pay more attention to what my taste buds and nose are telling me. When I receive their messages loud and clear, I open myself up to a world of WOWs.

The Czech Tourism website has information on the Plzeňský Prazdroj Brewery in Pilsen, along with a list of tours and events.