“Dry your hands,” Simon called from the doorway of the Hotel Valle Escondido staff break room. “You have a visitor.” I was halfway through the latest load of dirty dishes that had come down from the Green Room at the Ninth Annual Boquete Jazz and Blues Festival, where I had signed up to volunteer for two days worth of transforming dishes from soiled to sparkling. When I turned around, towel in hand, all I could think was WOW!

A Pensive Moment for Deanna

Standing in the middle of the room was Deanna Bogart, an award-winning, world-class jazz and blues pianist, saxophonist, vocalist and composer. The day before, she had graciously agreed to my request for an interview. and someone from the Green Room was supposed to notify me when she was ready. Now, here she was. And there I was, apron soaked through to my t-shirt, my hair sticking to my forehead, no lipstick and no idea what to do next.

Deciding that this was no time to allow vanity to get in the way, I offered to accompany Deanna back to the Green Room, where she might be more comfortable. To my surprise, she said that she preferred to be right where we were, and even offered to take my place at the sink while we talked. It was at that moment I knew that I was really going to love doing this interview. 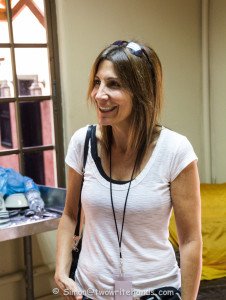 Deanna Chats – Dishes in the Background

I was already blown away by her music, which touches on genres other than jazz and blues. I would call it eclectic, but Deanna calls it “Blusion”.

During her performance, I was at my station, doing what needed doing to keep the Green Room supplied with clean plates and silverware. But I just couldn’t stop myself from bopping around the room to some of her more boogie-woogie style songs that floated through the open window in front of the sink.

Born in Detroit, Deanna began showing her natural talent at an early age. She could pick up a guitar for the first time and pick out a song. She could sing harmony, and teach others. There was no denying that music was an integral part of her being.

In middle school, Deanna wanted to play the saxophone, but was told that, “girls didn’t play the saxophone. They played the clarinet.” This did not sit well with the young Deanna, who never stood for being told she “couldn’t.”

Deanna Gets Up Close and Personal with Her Audience 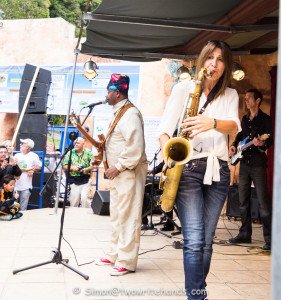 “I remember auditioning at 15 at a little coffee house,” Deanna recalled, “and the guy said,’Honey, let me save you years of pain and heartache. You’re not that good.’ And I thought, ‘I’ll show him.’”

Did the wildly successful adult Deanna ever go back and rub his nose in it? “I don’t have to, now do I?,” she said with mock smugness.

I suppose my interview should have consisted of questions about the people who influenced her music, her first big break, her favorite fellow musicians, and other things that inquiring minds want to know. Instead, the bulk of the interview was taken up with a discussion of two of Deanna’s songs that she composed.

The night before, prior to my brain succumbing to my body’s demand for sleep, I found Deanna Bogart on iTunes Radio, and listened to some of her songs. Two stood out for me: “Shadows on the Bedroom Wall” and “Timing is Everything”. The lyrics were insightful, sometimes dark, and totally engaging.

“The songs that are hardest for me to write tend to be the songs that must be written,” Deanna said of “Timing is Everything”. Through the song Deanna ponders the way things might have been had she and her twin nieces with special needs been born in another time. It was a point when many things were converging in Deanna’s life, including the loss of family members.

Born Jewish, Deanna was deeply affected by what she experienced at Dachau on a visit to Germany. “I remember going in there,” she recalled, “and thinking wow, if this was just a different day, one whisp of chance, I might have been there instead of here.”

And, if her nieces had been born in another time period, they wouldn’t be treated the same way they are treated today

These were only two of the things that Deanna pondered, as the title song for her 2003 album took shape.

Another song on the “Timing is Everything” album is “Shadows on the Bedroom Wall”. It is a haunting combination of dark lyrics from a painful time, set to upbeat music. “It was the point where I was finding out how I was going to choose whether I was going to have my childhood be an ally or a ballast,” Deanna, explained, describing a choice everyone must make at some point. I almost didn’t finish it, she confessed.

Unlike many performers, Deanna doesn’t draw a distinct line between her public and private personas. In fact, there truly is only one Deanna Bogart persona. “I’m not any different, ever,” she insisted. “I don’t believe in leaving everything off the stage and getting up there and pretending it didn’t happen and go on with the show.”

Deanna Bogart is a musician who puts what she needs into her music and lets it work itself out. “All I have to give is me,” she continued. ”I think every gig should be unique to that night and those people.”

For Deanna, her craft is also her outlet for what lives inside of her. “I need to play music” she said. “It balances me emotionally. It’s gotten me through stuff. I’m not sure I would still be here if I didn’t have the safe zone of Deanna Land that I can go into musically.”

As she spoke, I couldn’t help noticing how alike we were in many ways (no, not the talented musician part!); from the things we ponder, to our distain for the words, “you can’t do that.” If I didn’t have several years on her, I could have entertained the notion that we were twins, separated at birth.

My lasting impression of this multi-talented musician? Deanna Bogart is down-to-earth and as real as they come. I will spend more time listening to her music and lyrics, and be WOWed many more times by this ultimate artist.

Learn more about Deanna Bogart and her band on her website (link), where you will find a discography and a link to the lyrics to her songs.