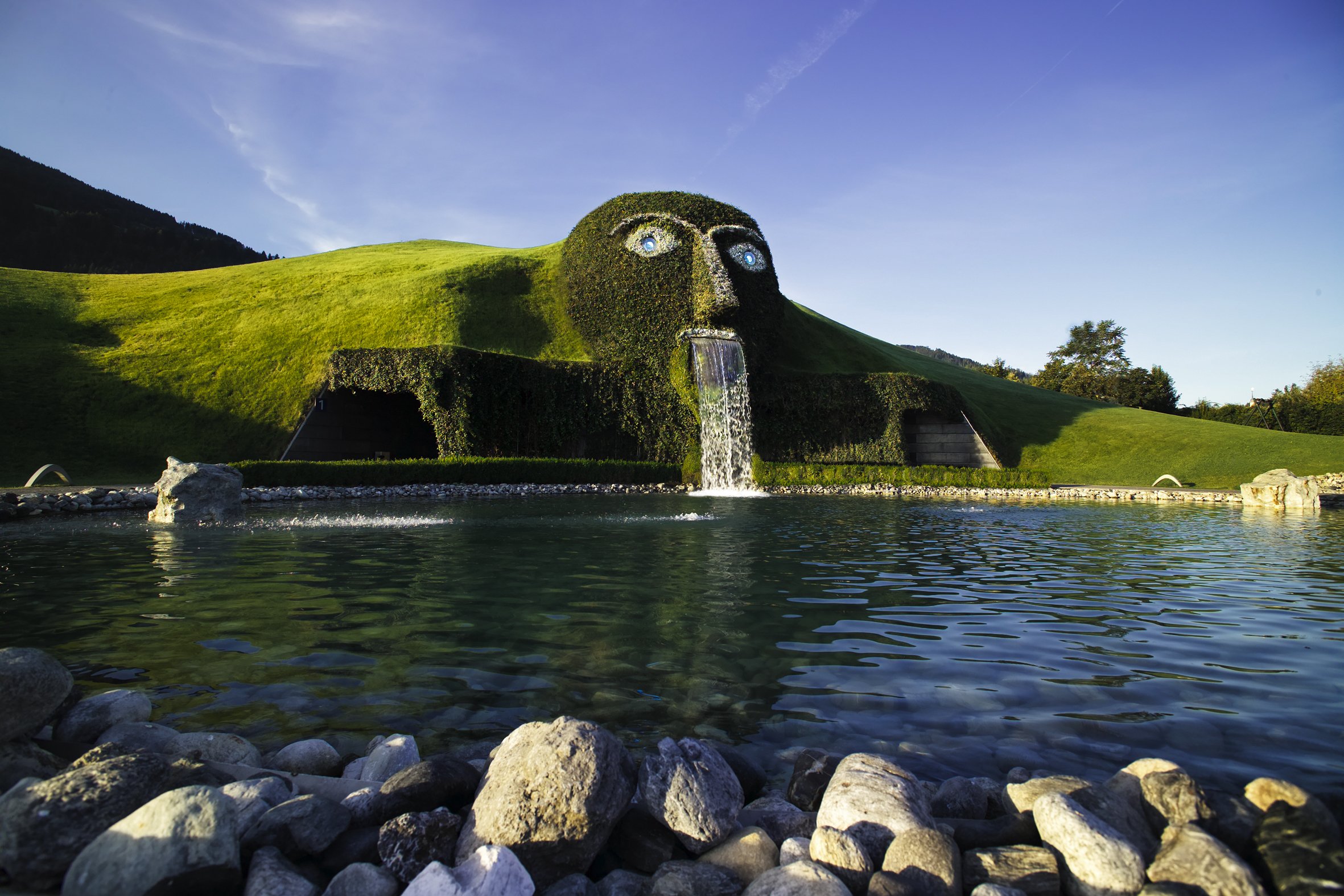 All that Glitters is Definitely Not Gold

As we left the small Innsbruck hotel with our luggage, we stepped into an Austrian winter wonderland. The snow that had fallen the day before was still pristine, and softly blanketed our surroundings as far as the eye could see. Innsbruck was planned as a pass-through on our way to Germany, but little did we know, as we packed up the car, this charming Tyrollean town was about to become a gateway to WOW!

We, Simon, Kevin, Gary, their friend, Walker, my guide dog, Buffy, and I, had just spent the night of Thanksgiving, 1997, at the hotel. While there, Kevin picked up a brochure about a near-by museum that seemed a little funky, but interesting, and it was only 20 minutes from where we were. That was how we ended up at Swarovski Crystal Worlds. 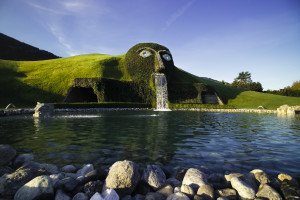 The museum was guarded by a giant’s head, with a pair of luminous crystal eyes that were constantly changing color. The head is grass-covered in the summer, and snow-covered in winter. We must have caught it on a bad hair day, because the thing was completely naked, despite the snow that covered everything else. The giant’s mouth was wide open, and from that gaping maw poured a waterfall that terminated in a ground-level pool. In the dead of winter, the water becomes an enormous icicle.

We circled around and walked under the giant’s chin to enter the building, between the entrance and the cascading water. Then it was on into a magnificent subterranean world.

What awaited us inside was a series of 14 underground rooms called “The Chambers of Wonders”. Each area held exquisitely crafted surprises fashioned in crystal that caught the light and sent it back in a shower of multi-colored magic. 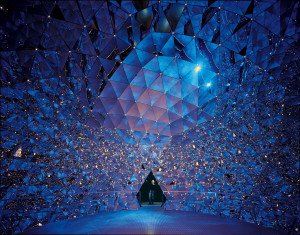 The Crystal Dome was a large chamber that contained – you guessed it – a high crystal dome. The room also offered an almost complete sensory experience. Along with the colors refracting from the dome were glittering sculptures, soft music and pleasing fragrances. The sense of taste was not included in the presentation. After all, glass would have made a terrible mid-morning snack.

Another chamber had us feeling as if we had just walked into an enormous kaleidoscope, containing hundreds of mirrors. And there was much more: chambers housing steel branches laden with crystals, large crystal-studded sculptures, delicate figurines and paintings, some of which were created by world-famous artists such as Salvador Dali. 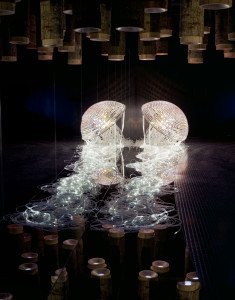 This wondrous place began its remarkable story in 1895, when a Bohemian-born genius named Daniel Swarovski opened the company that still bears his name in Wattens. He had begun taking an interest in his father’s crystal business as a child, and grew up to invent a grinding tool that made the process easier and more precise.

Throughout his life, Swarovski continued to perfect his tools and methods, making his jewelry and other items of high quality crystal sought after world-wide.

In 1948, the company opened a new branch called Swarovski Optic, and began manufacturing telescopes and binoculars. Today, the company is still a family-run business, in spite of its tremendous growth from Daniel’s first appearance in Austria. Swarovski products are considered the gold standard when it comes to anything crystal.

In 1995, to celebrate the 100th anniversary of the founding of the Swarovski Company, multi-media artist, Andre Heller was commissioned to design the museum as a stunning tribute to innovation and dedication to quality. 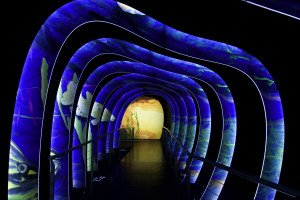 We continued to marvel at and experienced as we made our way through each new chamber. When we exited the last one, to no one’s surprise, we found ourselves in a large showroom full of jewelry and other items for purchase. Almost immediately, Simon found a pair of binoculars, which he uses to this day. The range and clarity of the lenses still amaze him.

Kevin and I wandered around among the displays, as he showed me pieces of jewelry. No one seemed to mind that I was carefully and reverently exploring them with my fingertips. There was much to admire about the textured pieces that were so beautifully designed and crafted. Also, my vision was still good enough to appreciate how the crystals sparkled in the light.

What I didn’t know was that Kevin was actually on a mission to keep me distracted while Simon and Gary took care of some business.

What that business was, revealed itself on Christmas morning when two of my presents exposed the plot. Gary gave me a pair of crystal earrings that reflected the color of what ever I wore. And Simon had picked out a dainty neckless and earring set embedded with crystals in my favorite color, red.

Although I can no longer see my crystal jewelry glitter, when ever I wear it, my memory returns to that amazing accidental WOW!

Swarovski Crystal Worlds is currently closed due to a major renovation and expansion project, and will reopen as a facility twice its original size in late April, 2015. The museum’s official website is a good place to start, if you want to learn more about the expansion, and what new wonders await.

Note: At the time this WOW took place, we did not own a digital camera, and Simon didn’t take a lot of pictures back then anyway. My thanks go out to Google for always being there to help me find what I need.