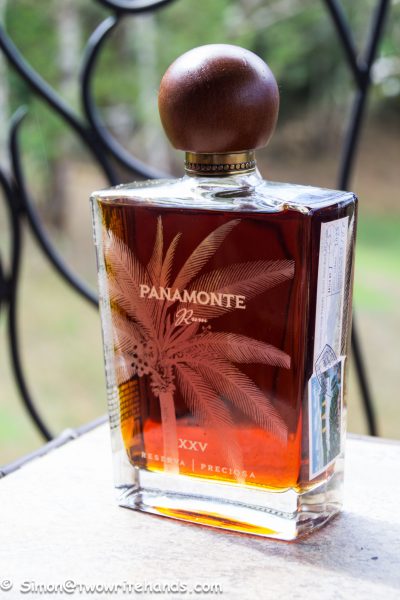 So Exquisite, You’ll Forget Everything You Thought You Knew About Rum.

Once upon a time, I believed that the nirvana of sipping rum had been reached with my first taste of Ron del Barrilito, a smooth and flavorful rum from Puerto Rico. Then I was offered a glass of Panamonte XXV, and all I could think to say was WOW! 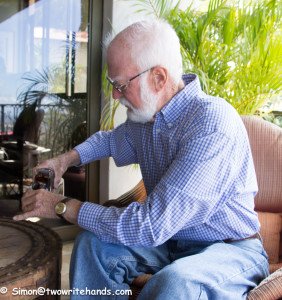 Yes, I’ve been drinking once more, and given the chance, I’d do it again.

This particular adventure began at the Boquete Jazz and Blues Festival in February, 2015. Simon and I were volunteering in the Green Room for two solid days. At the end of the first day, Vicki, the Green Room coordinator, insisted that we try some rum going by the name of Panama Red. 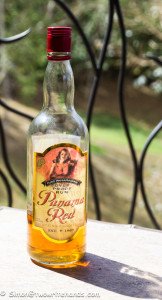 We had never heard of this rum, but were up for anything. It was smooth and delicious, just like our beloved Ron del Barrilito. The bad news? it wasn’t available in Panama.

The rum and the story of the man who produced and donated it to the festival were too intriguing to ignore. And that’s how we found ourselves at the home of Panamonte Brands owner, Jim Wasson, talking rum and music on his patio overlooking a lush valley.

As we chatted, Jim produced a magnificent glass bottle with a pewter neck and wooden top containing Panamonte XXV, a 25-year-old rum that is in limited supply, and sells for approximately $450.00 a bottle.

He really had to twist my arm to accept a glass, but of course it was a matter of being polite. After all I wasn’t raised in a barn. Well, okay, the bit about not being raised in a barn is true.

Jim suggested that we drink the rum with a single ice cube. For one who drinks single malt scotch neat, this seemed odd. But who was I to argue with an expert? 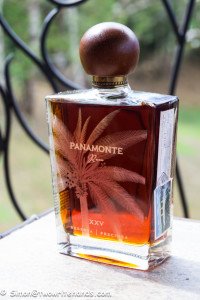 First of all, I have to admit to never having ingested anything this expensive, but the reverence I now have for Panamonte XXV has nothing at all to do with its price tag.

The aroma was intoxicatingly strong with whisps of vanilla, oak and what reminded me of raisins. Just sniffing the rum was a privilege.

My first sip reminded me of a sneeze that teases your nose, but never follows through. Only this was not in the least bit annoying. It was total bliss.

The alcohol kick never quite got there, because the drink slipped so smoothly from my lips to my tongue, then made its way down, leaving a sensation of warmth.

The flavor was slightly oaky with notes of tobacco and something I couldn’t quite identify. To me, drinking Panamonte XXV was like a deluxe spa treatment for my senses, and I had to push away a twinge of guilt so that I could fully enjoy the moment.

If that first sip was smooth, the finish was like satin. And as I sipped, the coolness provided by the ice opened it up, creating an even more complex harmony of flavor.

Hearing the story of how this fine sipping rum came about made the experience even more meaningful.

Jim learned to appreciate rum from his grandfather., who would bring back rum from his visits to pre-Castro Cuba. It was nothing like the stuff available in the U.S., and Jim grew up wanting to recreate the quality of the rum to which his grandfather had introduced him. 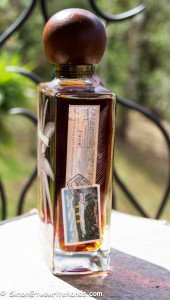 In 1984, Jim, a third generation inn keeper, owned a hotel in Breeze wood, PA, but could’t  find enough funding to finance the purchase of another hotel. It was a time when the economy was just beginning to recover, he and a friend were, looking for something that would provide a future financial safety net if Social Security wasn’t there for them.

”The best investment,” Jim recalled, “was something you could put aside and you couldn’t readily touch it. Money in a bank account was too easy to get and do something with. It should be hard to convert to cash. And over a few rum and Cokes, we concocted this idea. Ever heard ‘of liquid assets’ ?”

At the time they started putting rum into barrels, the barrels cost more than the rum. “The down side was that the worst thing that could happen was we could drink it,” Jim said.

The idea of aging rum for future sale and profit seemed like a good idea at the time, but Jim admits that if he had to do it all over again, he would have to give the project very serious thought. No matter where, the bureaucratic mess for selling alcohol is particularly difficult.

Still, Jim is very proud of the products Panamonte Brands produces. But what of Panama Red? Well according to Jim, it was almost an afterthought. Jim wanted to produce something special in limited quantities, but in 2009, the market was less than stable.

“We had these younger reserves,” Jim recalled, “that we thought maybe, if we had a less expensive product to roll out first, it might be a good thing to do. So, that’s how the thought of Panama Red came up. That there might be a niche in the marketplace for a very good overproof rum, because there really wasn’t one.”

That turned out to have been a wise move. Panama Red received gold medals in the overproof category everywhere it competed: Miami, Madrid, and most recently, the World Spirits Competition in San Francisco. 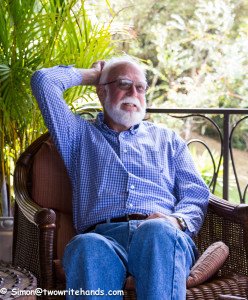 Jim Wassom Relaxing on His Patio at Home

There are enough stories of Jim’s career in the rum business, the hotel business and his venture into songwriting to fill a book. But, since this post is about the rum, I will restrain myself from going farther. What I will do, though, is leave you with two songs that Jim wrote. Enjoy!

I often joke about wanting to take coffee or margaritas via an IV. I would never even joke about doing this with Panamonte XXV or Panama Red. After all, I wouldn’t ever want to miss a single opportunity to remember our gracious host, his fascinating stories and to say WOW!