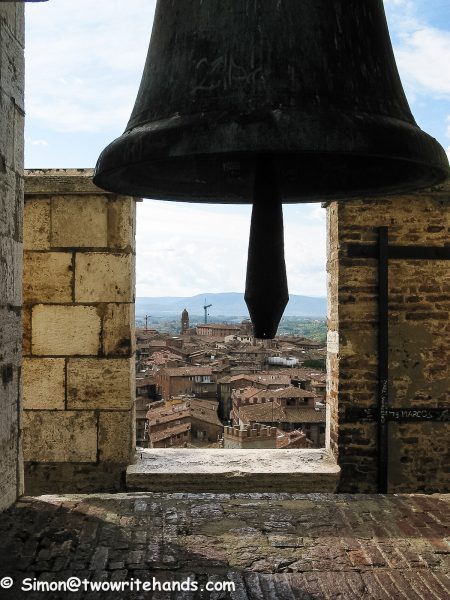 A Sparkling Jewel Under the Tuscan Sun.

The Gelato was cool and refreshing. Too bad the increasing heat was accelerating the sticky drips of deliciousness running down to my wrist. Normally, I would have uttered a naughty word, but since I was sitting on a bench in the Piazza del Campo in Siena, my brain couldn’t quite get past WOW! 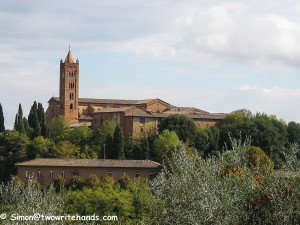 Simon, C.J and I were in Tuscany as part of our 25th anniversary trip in October, 2003. There was much in this charismatic region of Italy that we wanted to see, and we had foolishly allowed ourselves only one day to visit Siena.

It had been a drive of well over an hour from our bed and breakfast in the tiny village of Dudda, and we wanted to be sure to navigate the winding road back before dark. This allowed us only a few precious hours in this hauntingly beautiful medieval town.

The drive had been punctuated by varying degrees of rain, but Siena greeted us with radiant sunshine and a sky whose soft blue haze continued to intensify throughout the day. 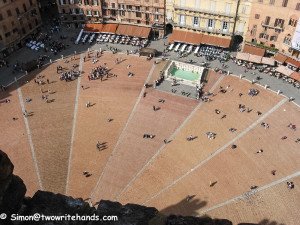 We spent most of our time in Piazza del Campo, Siena’s main public gathering place. I almost said “square”, but the area’s appearance is more reminiscent of a concave shell. We strolled over red bricks that were laid out in a fishbone pattern, with a sunburst of nine marble rays. These strips represent the Government of the Nine, who Ruled Siena from 1292 to 1355.

As we drifted past the Gaia Fountain, we took the time to admire the smooth, cool white marble. The fountain is a copy of the original work by Jacopo della Quercia, a masterpiece that he created for this very spot in 1419.

Knowing we could not do any of the magnificent churches, museums and historical buildings justice, we opted for spending our time outdoors. That is except for Simon’s climb up the over 500 steps of Torre del Manga, a tower that soars 333 feet into the Siena skyline. 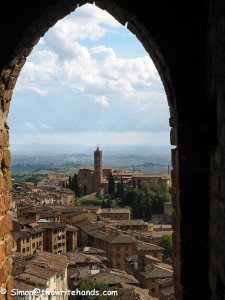 While Simon was enjoying the spectacular panoramic view of Sienna and surrounding countryside from above, C.J. and I sat in the shade just soaking up the atmosphere.

Like all my dogs, C.J. was a born people magnet, and drawing people to our bench was exactly what she did. Fellow tourists and local folks stopped to chat and admire C.J.’s calm demeanor and adorable face. Although not by design, my dogs have led both Simon and me into many delightful and interesting conversations. Want to effortlessly meet people during your travels? Get a dog.

Originally a site for markets, Piazza del campo assumed its place of prominence at the end of the 13th century, At that time, the entire population of Siena could gather within its boundaries. Today, the piazza is known worldwide as the venue for The Palio, a traditional medieval horse race held twice every summer. 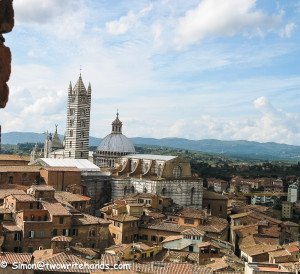 Annually, on July 2 and August 16, wildly cheering crowds assemble to watch horses and riders representing 17 of Siena’s neighborhoods race around the Piazza del Campo at breakneck speed. The event is widely televised, and lovers of James Bond movies can see Siena and the Palio in the 2008 film, Quantum of Solace.

So here is what I was thinking as the gelato dripped. There is so much of Siena to see in the Piazza del Campa along and the surrounding area. It would only be logical to return to Tuscany and take the time to explore the 12th century Duomo de Siena 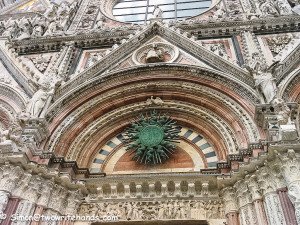 Part of the Entrance Facade of the Duomo de Siena

with its ornately crafted marble façade, the Chapel of the Virgin (built following the plague of 1348) and the Palazzo Pubblico – the civic palace (constructed between 1297 and 1310) that still houses the city’s municipal offices. A long, slow tour of the Civic Museum would be another must. Conclusion? Get ourselves back to Tuscany and spend more time in Siena, ASAP. Now, where’s that lottery ticket I bought yesterday?

ItalyGuides website has a wealth information about Siena and Piazza del Campo.