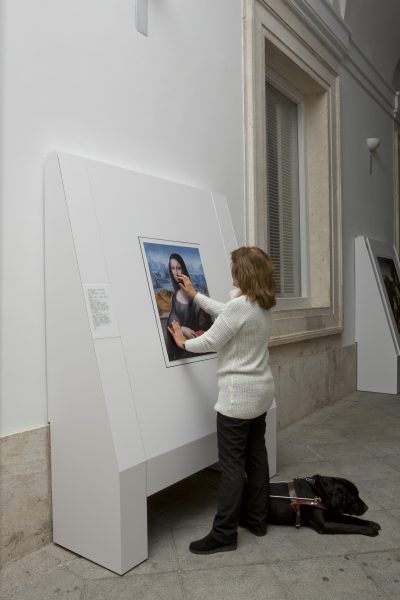 Madrid’s World-Famous Art Museum Finds a Way to Share Treasured Paintings with People who are Blind. 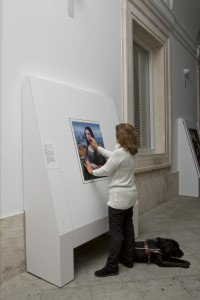 The Mona Lisa was always one of my favorite paintings. Perhaps this was because there was simplicity and contrast that even my limited vision could see back in the day. Now, I was standing in one of the Prado’s many galleries, running my fingers over the eyes, the hair and that famous smile. To me, that was one heck of a WOW!

Of course, this was not the original Da Vincci masterpiece. It was a three-dimensional replica of a copy by an apprentice of the master painter. The painting hangs in the Prado and is one of six that were chosen to be replicated in 3-D for the “Touching the Prado” exhibit. 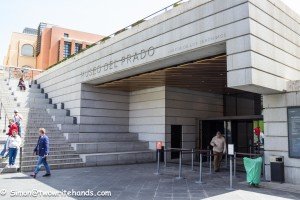 On January 20, 2015, the Prado launched its first initiative focused on enabling individuals who are blind or vision impaired. to experience priceless art as never before. The six finger-friendly paintings on display in the Prado’s North Gallery, located on the museum’s Ground floor, are a result of inclusive thinking, innovation and high tech. 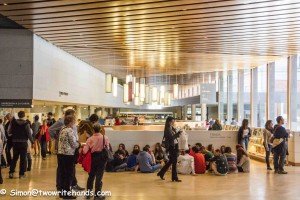 Despite a cyber snag that resulted in my request for a tour never having reached the press office, Simon and I were welcomed warmly, and were invited to explore the exhibit. Unfortunately, the exhibit’s curator, Fernando Pérez Suescun, was unavailable for an interview, but we still had the opportunity to examine the six works.

There was Braille on one side of each panel and print on the other, explaining the paintings. There were also black cardboard eye shades, so that people with sight could experience these magnificent works in a new way. I tried to persuade Simon to try them, since photography is not permitted in the Prado, but he declined. You’d think that after being married to a blind woman for nearly 37 years, he’d be itching to to try it.

We went from panel to panel. While I let my fingers transmit the images to my brain, Simon pointed out areas I might have missed. Some, like the tulips, roses and cherries in Juan an der Hamen y León’s “Still life with Artichokes, Flowers and Glass Vessels”. But, had it not been for the title, the artichokes might have stumped me.

After what had been a thoroughly intriguing 45 minutes up close and personal with some of the most exquisite paintings in the world, we began to make our way out of the exhibit area. It was then we almost literally ran into Alvaro Perdices, Exhibition Coordinator for the “Touch the Prado” project. Without hesitation, he offered to give us a private tour. Even though we had just emerged from the exhibit, the promise of hearing more about the paintings was irresistible. 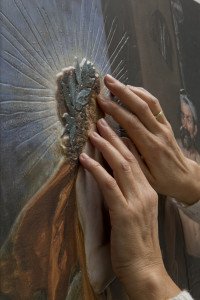 Alvaro explained that the exhibit was initiated by the Prado in an effort to make more art available to more people. It took a full year for Estudios Durero, a printing company near Bilbao in Spain’s Basque Country, to create the paintings for the “Touch the Prado” exhibit. Through the use of a relief printing technique, these six paintings came to life for many who never imagined they would one day know their beauty first-hand, so to speak.

Then our reintroduction to the exhibit began in earnest. 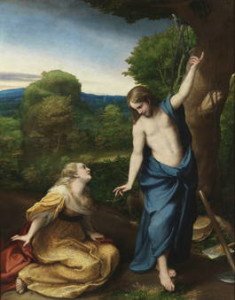 Painted, in 1525 by Italian artist, Correggio using oil on canvas – the work depicts the meeting between Jesus, following his resurrection, and Mary Magdalene. He tells her not to touch him, because he has not yet reached the house of his father. His raised left hand adding emphasis to his words.

Ironically, the literal title translates, “Don’t  touch me.” Of course, this painting is just begging to be touched. Mary Magdalene, kneeling, face turned upward to Christ, the trees in the background and that strong raised hand were all easy to identify, making the artist’s meaning clear.

It is the Mona Lisa copy that first grabbed my attention. Da Vinci’s student used oil on walnut, and the master painter used oil on ash in their 1519 paintings, which appear to have been created almost simultaneously. X-ray technology shows that the changes DaVinci and his student made to the paintings were done at the same time.

Whether it’s the choice of wood, differences in conditions between the Prado and the Louvre or the separate journeys taken by these paintings over the centuries, the copy is in better condition than the original. 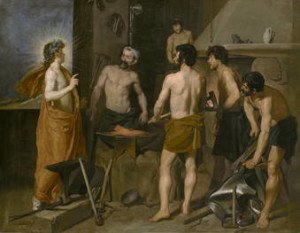 Created by a Diego Rodríguez de Silva y Velázquez in 1630 this work is an oil on canvas, depicting Apollo among several mortals at an iron forge. It was originally decided that the 3-D paintings should be the same size as the original works, however, this one was deemed too large to allow easy tactile access. Although the dimensions had to be downsized, the quality remained consistent. Men, Greek God and tools were all easy to discern. And so were the men’s bare feet. Guess they didn’t have OSHA back then.

The Nobleman with his Hand on his Chest 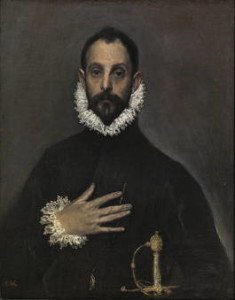 An oil on canvas painted by El Greco in 1580, presented some challenges. The ruffles circling the man’s wrists and collar were easy to distinguish from the rest of his clothing. But since this was a head-to-waist portrait, both the medallion hanging from his neck by a chain and the sword hilt stumped me.

Since my experience with swords is non-existent, I was clueless. However, someone who has lost their sight later in life, would probably have no trouble knowing what it is.

The face was as detailed as the clothing, but in an effort to leave nothing out, Alvaro showed me a spot that seemed out of place. This was how the thick oil looked on the original canvas.

After reexamining the still life, it occurred to me that, having seen it before, I could now identify everything on the painting, but was able to find even more detail that had eluded me earlier.

A 1777 oil on canvas by Francisco de Goya, was the last panel, and my hands-down favorite. It showed a young couple. The man is holding a parasol over the head of the young lady, who is sitting with a small dog in her lap. 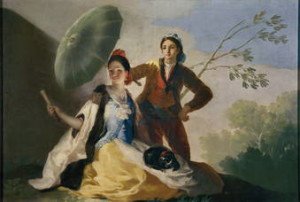 I liked it because it had such a happy feel about it. The parasol, fan and the girl’s hair bow were easy to identify, however, the lap dog was a little harder.

Alvaro said that since not all people who are blind are unable to see anything, consideration was given to making sure that the colors and shadows of the paintings were as close to the originals as possible.

Estudios Durero, in accordance with the Prado’s plan for the exhibit, was the first to work with color and this level of high quality. They are currently experimenting with using temperature to represent colors. For example, warmth could represent red, yellow or orange, whereas a cooler temperature would represent blues and greens.

But making art more accessible has nothing to do with egos. “It’s not important to be first or second”, Alvaro insisted. “The important thing is that we do it. The museum belongs to the people. We are supported by tax-payers. We are trying to make it as accessible to as many as we can to do it justice”. What the Prado is doing is a forward-thinking and compassionate approach. Perhaps the “Touch the Prado” exhibit is just the beginning of a trend that will enable many more people to say “WOW!”

Information about the “Touch the Prado” exhibit can be found on the museum’s website.

Our gratitude goes out to the Museo del Prado for their willing assistance in making this article possible. As always, all opinions are mine alone.