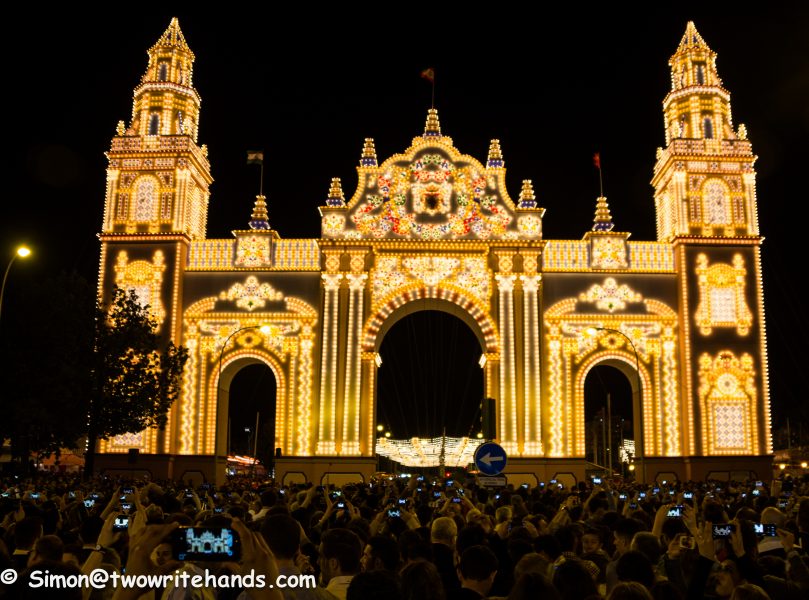 Serious Flamenco and Non-Stop Fun Make for the Perfect Party 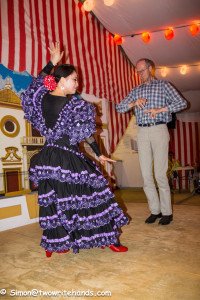 Orange and white paper lanterns alternated gayly illuminating the large tent. Tables were occupied by smiling, drinking, tapas-eating revelers. On the tiny stage, a man in a checkered shirt and tan slacks was doing a respectable job of showing off his flamenco skills, while the traditionally dressed woman was fairing even better. Recorded music provided the rhythms for what could only be described as “flamenco karaoke” in one of several public tents at the 2015 La Feria de Abril, Seville’s one-week flamenco party. And what a WOW of a party it was!

Simon, Otto and I met up with Elizabeth and Mark, beloved sister and brother-in-law, who traveled from York, England to spend a few days touring with us. It was our first day in Sevilla, and we had spent a relaxed morning and pleasant afternoon getting to know the capital of Andalusia. We had learned that the biggest event in the region was scheduled to begin that evening at a fairground used solely for La Feria, so we decided to investigate.

Although La Feria didn’t officially open until midnight, festivities were in full swing by 9:00 PM. The first thing we noticed was a brightly-lit amusement park, complete with ferris wheel and head-spinning thrill rides. 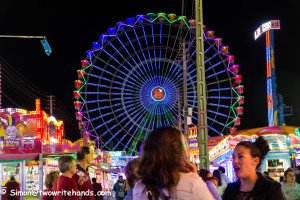 Fun Fair at the Feria

Then we saw the sea of tents that seemed to stretch into infinity. They were brightly colored, and elaborately decorated inside. What they all had in common was that drinks and tapas were being served, and flamenco dancing was ongoing. 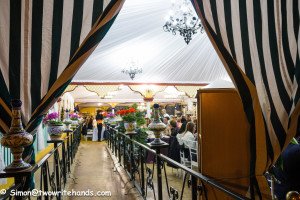 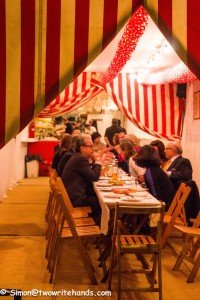 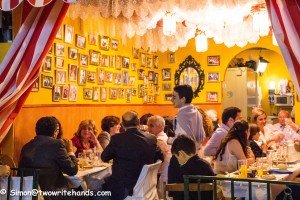 Family Tent at the Feria

We learned that most of the over 1,000 tents were privately owned by families, neighborhoods, businesses and political entities. Unless you had an invitation from a member, you were out of luck.

There were, however, several public tents, where anyone could join the party. So, that’s exactly what we did.

La Feria de Abril is an annual event that combines flamenco, horse-drawn carriages, and bullfighting, to create a perfect blend of all things Spanish. Throughout the week, you can see girls dressed in their brightly colored flamenco dresses walking the streets, sitting in cafes and alighting from carriages.

Every evening, there is a bullfight at the La Real Maestranza. Although this abomination is falling out of favor throughout Spain, the tradition is still a part of Sevilla’s annual fiesta, and tickets are sold out months in advance.

It’s hard to imagine that in 1847 the scene of La Feria was a local cattle fair. A year later, three tents – known as casitas – were erected at the event. This provided opportunities for local dignitaries to socialize. I can’t say for certain, but these three casitas may actually have been the first known hospitality suites. 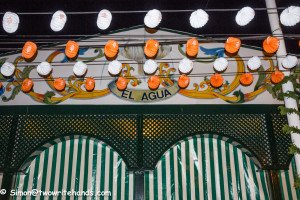 Eventually, the cattle disappeared, but the party kept growing. By 1973 the event had become so large, it had to be moved. to its current location, known as ‘Real de la Feria, which takes up approximately 300 acres. 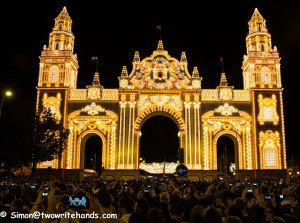 By 11:45 PM, we were standing outside the fairground, waiting for the official opening. at exactly midnight, the mayor of Sevilla threw a switch, and tens of thousands of lights and lanterns lit up the night sky. This was followed by loud applause and boisterous shouting. Then the partiers made a beeline for the tents.

Having done all the partying we could handle for one night, we moved upstream toward our hotel, and a good night;s sleep.

If you’re ever planning a trip to Spain, try to visit Sevilla the week of the Feria de Abril. It will be a WOW you’ll never forget.