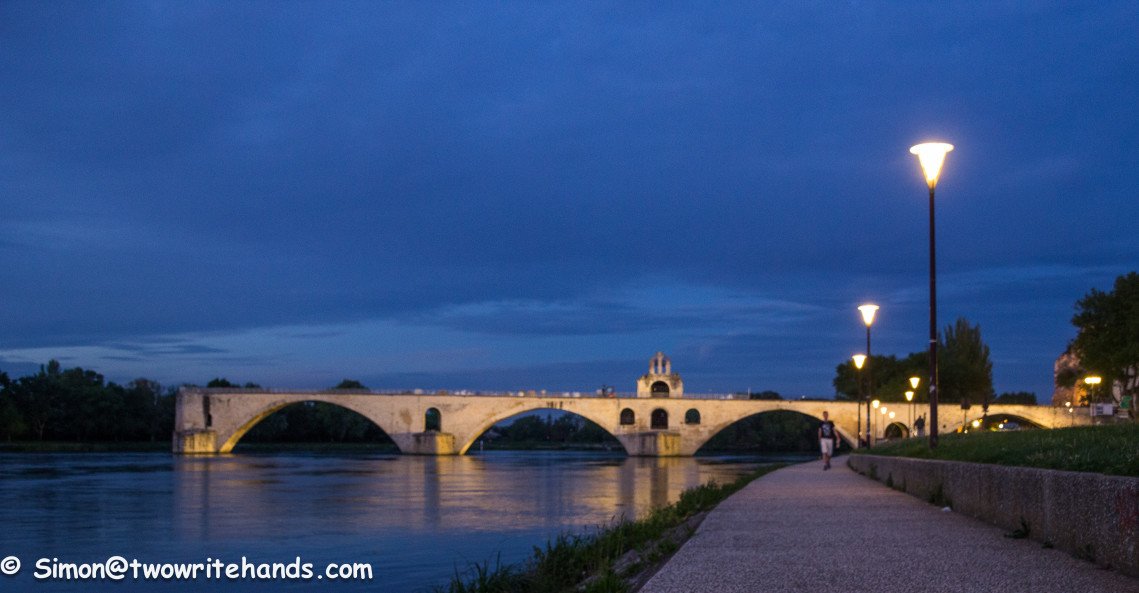 Diminished, but not Destroyed. 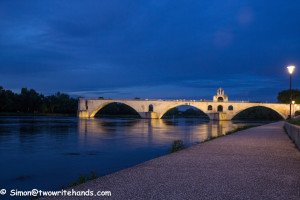 Night View of the Pont d’Avignon

It felt a little odd; standing on the subject of a French song I used to sing as a child. And yet, it was a bit like coming home. “Sur le pont d’Avignon” sang in my head as we explored the history of a medieval bridge that had defied all odds in order to survive, if only in part. Now, there’s a WOW if there ever was one.

We were in the historic, and totally charming, town of Avignon, France. It was supposed to be a nice little stop-over between Barcelona and Munich, but our stay turned out to be one delightful surprise after another.

Our accommodations were in an area inside the town wall, which was convenient to everything we had planned to see. Following a pleasant and informative 40-minute open air train ride through the town, we had a sense of Avignon’s historical sites and their locations. So, after disembarking, we made a beeline for the bridge. 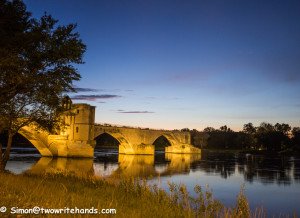 Night View of the Pont d’Avignon

It took us well over an hour to navigate all there was to see with the help of an excellent audio guided tour. We mounted a flight of stairs that led us to the bridge, and took the time to examine a small exhibit of panels that displayed its history.

According to a combination of historical fact and legend, a young shepard boy, who later became Saint Bénézet, claimed that the voice of Jesus Christ told him to build a bridge across the Rhone River. This may have been 1177, but even back then, people didn’t always believe everything they heard. The boy was soundly ridiculed.

The story goes that, in order to prove that he was acting on a command from heaven, Bénézet miraculously lifted an enormous stone. Now, 30 men had not been able to lift that stone, but this divinely inspired boy seemed to raise it up without effort, and easily toss it into the river. This stone became the support for the bridge’s first arch.

Bénézet was not a bridge builder, but his efforts raised ample funding for the project. Sadly, he died in 1184, never seeing the completion of the bridge he inspired. 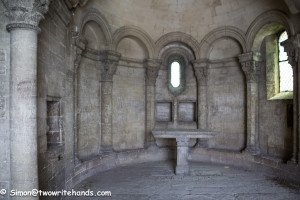 A chapel bearing his name and holding his tomb was built as part of the bridge, Although. Saint Bénézet’s remains are no longer there – he now reposes in Saint Dider of Avignon church – the chapel is definitely worth a visit. 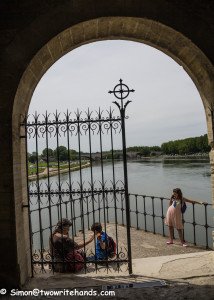 View of the Rhone from Saint Benezet’s Chapel

The bridge spanned the Rhone River between Avignon and Villeneuve, and was, at the time, the only stone bridge between Lyon and the Mediterranean.

The Pont d’Avignon turned out to be a life-saver in every sense. The waters of the Rhone were treacherous to navigate by boat, and many boatman had lost their lives. Also, thanks to the bridge, Avignon was now able to control movements of merchants and pilgrims, crossing into the town, and to tax them for the privilege.

Avignon’s bridge had a good run, but floods and wars took their toll on its structure. It had been rebuilt, repaired and kept functioning, but the last straw came in 1664, in the form of a major flood. The bridge was abandoned, and allowed to deteriorate. Today, only four of the original 22 arches remain. 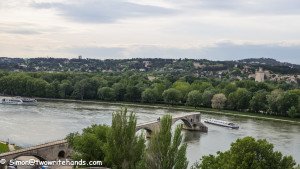 So what’s so special about a piece of an old stone bridge? Plenty. For one thing, there is its historical significance for the town of Avignon. It also holds many a tale of the glory days and beyond. What’s left of the bridge is a testament to ingenuity and the ability to survive.

As well as the tranquil atmosphere of the Saint Bénézet’s Chapel, there is the haunting simplicity of the Chapel of Saint Nicolas, the patron saint of mariners. 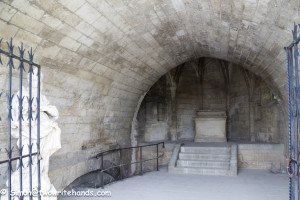 Walk to the end of what remains of the bridge, and you will find an iron fence and some really good photo ops of, Villeneuve across the water, and the magnificent Palais de Papes on the Avignon side. 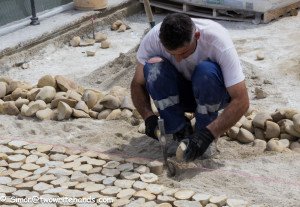 Artisan Creating the New Cobbled Surface on the Pont d’Avignon_

At the time of our visit, the end of the bridge was blocked off because the uneven stone is gradually being resurfaced in order to make it accessible for people in wheelchairs. Simon, not to be deterred, flashed his press credentials, and was permitted behind the barrier to take his pictures.

Before we left the site of the Pont d’Avignon, we were treated to a 3D computer-generated film that was like taking a trip back in time to 1350. with mediaeval music, creaking windmills and lapping waves softly playing in the background, we watched the bridge with its full 22 arches come to life. The camera moved along the entire span of the Rhône River from bank to bank, – recreating the way the bridge looked before time and tragedy shaped it into the monument it is today.

While walking on the bridge, it occurred to me that the song of my childhood may have been inaccurate. The lyrics clearly state that there is a lot of dancing going on. This may be possible when the resurfacing is complete, but then and now, you could seriously hurt yourself showing off your fancy footwork.

As we later learned, the original title of the song was, in fact, “Sous le Pont d’Avignon” (Under the Bridge of Avignon). It was inspired by popular medieval cafés that had dancing and other activities on the Ile de la Barthelasse, which was conveniently located under the original arches of the bridge.

The song gained its popularity in 1876, following the debut of an operetta, “Sur le Pont d’Avignon” (On the Bridge of Avignon).

I never cease to be amazed at the complexities that lurk behind the simplest things. My childhood self had no idea that decades later, I would come face-to-face with the significance of the song my friends and I sang. To actually be “:Sur le Pont d’Avignon”, was a rare and joyous WOW!

Our thanks go out to Sylvie and the Tourist Office in Avignon. Their hospitality and generosity made this article possible. Of course, as always, all opinions are entirely my own.

Avignon has much to offer for people of all ages. Learn more about this historic town and its history on the Avignon Tourist Office website.