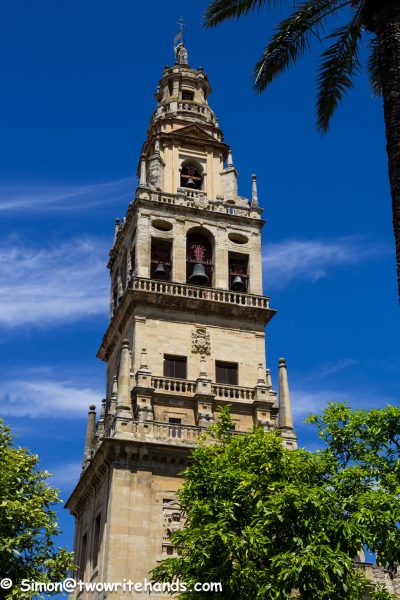 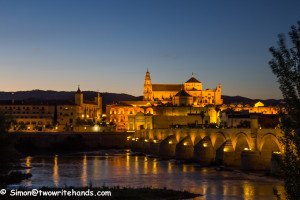 A Night View of the “Mosquedral”

It felt odd, to say the least, to be standing in a structure that survived centuries of Spanish history – wars, destruction, rebuilding – to exist as one of the most unusual historical buildings in the country. Understanding how a cathedral came to be built inside Europe’s oldest mosque was truly a WOW!

Cordoba was one of those historic towns that had haunted me throughout decades of reading historical fiction. Now, Simon, Otto and I stood where a bloody trail left by clashes of uncompromising religious beliefs led to this UNESCO World Heritage Site. The “mosquedral” – as I call it – was the place where two powerful ideologies miraculously came to share one space.

Prior to the 711 Muslim conquest of Spain, a Catholic church, built by the Visigoths, claimed the spot where the “Mosquedral” now stands. 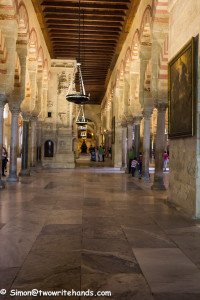 Part of the Original Mosque

Immediately following the conquest, the church managed to retain at least some of its identity when it was divided into halves – one Muslim and one Christian.. This uneasy coexistence lasted only a short time. In 784, the Caliph, al-Rahman I, demolished the building in order to erect a grand mosque in Córdoba, which at the time was, one of Europe’s richest and largest cities. The intent was to build a mosque that would rival those of Baghdad, Jerusalem, and Damascus, and build it directly on top of a Christian church to boot.

Construction began in 784, and the mosque was completed in 987, when the structure achieved its current dimensions.

We entered the structure by way of a patio-like area, which was a courtyard where the Muslims of the day performed their ablutions before entering the mosque. The orange trees and fountains had been preserved, creating a fragrant and peaceful welcome mat.

Upon entering the eighth-century building, we found ourselves in the main hall, supported by 856 columns that had been of jasper, onyx, ivory, marble, and granite. Running my hands over the cool surfaces seemed to draw me into the past, where men once prayed, and I would have been immediately executed had I been found among these columns.

Stained Glass Reflected on the Floor of the Mosque 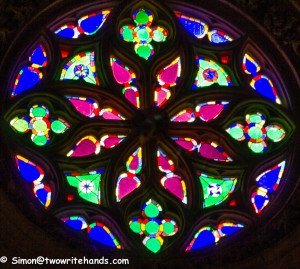 Stained Glass Window of the Mosque

Apparently, the concept of recycling is older than we may have thought. The columns were constructed from the remains of a Roman temple that had once stood on the site.

The five daily Muslim prayers and the weekly Friday prayers were held in the main hall. It also would have been used as a school and a place where Sharia Law cases were heard and decided. 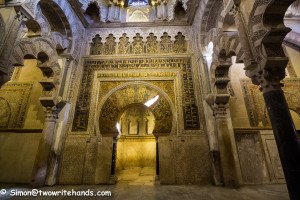 Entrance to the Mihrab

The mihrab (prayer niche), traditionally indicates the direction of Mecca, and the direction Muslims must face when praying. Although Mecca lies east-southeast of Cordoba’s mosque, its mihrab actually points south..

The correct direction of Mecca not withstanding, this mihrab is nothing short of spectacular. The ceiling is shell-shaped and expertly carved out of one block of marble. On either side of the mihrab, are exquisite decorations of golden mosaics. 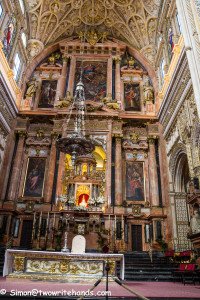 High Alter of the Cathedral within the Mosque

So how did a Renaissance cathedral end up in the middle of a mosque? When Cordoba was re-conquered by King Ferdinand III of Castile in 1236, the mosque was reconsecrated as a Catholic church. In the 16th century, the original cathedral was erected in its centre.

The fact that the mosque had been reconverted to a Catholic church, may have saved it from certain destruction during the insanity of the Spanish Inquisition.

Additions continued to be made to the “mosquedral” by architects and artists all the way up to the late 18th century. Among the more striking additions are two mahogany pulpits featuring a life size small bull and a lion crafted in veined marble along with an eagle carved out of black marble.

There were chapels, sculptures and choir lofts, some touchable and some not. To me, the entire experience seemed as surreal as it was breath-taking. 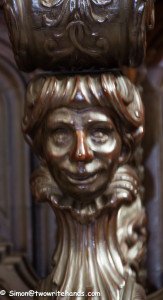 Wood Carving on a Choir Stall in the Cathedral

The entrance fee for the “mosquedral” is 8 Euros for adults and 4 Euros for children, but there is no charge for the Patio de Los Naranjos. This is an expansive open courtyard where, after exiting the “mosquedral”, we took a few minutes to sit and reflect on what we had experienced. It was also an opportunity for Simon to take some photos.

It is interesting to note that Spanish Muslims have been lobbying the Roman Catholic Church since the early 2000’s, for permission to pray in the “mosquedral”. The request has repeatedly been, refused by church authorities both in Spain and in the Vatican

If there was ever a one-of-a-kind religious edifice, the “mosquedral is it. I challenge anyone to visit it and not say “WOW!”

Information on visiting the Mezquita-Catedral de Córdoba is available from their comprehensive website.