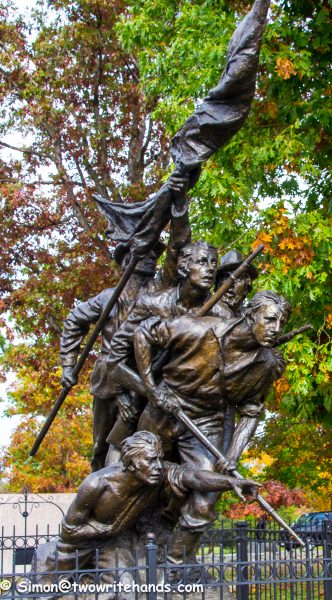 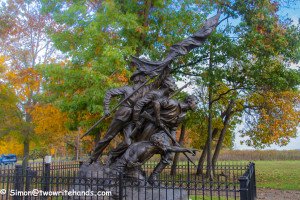 When your eyes can’t provide your brain with visual input, your mind is forced to improvise. Depending on sounds, smells descriptions given by others and that inner something that’s hard to define, the mind’s eye can visualize scenes of intense beauty or unspeakable horror. A two-hour tour of the Gettysburg Battlefield with our knowledgable and articulate Licensed Battlefield Guide inspired me to see both. And standing in front of the North Carolina State Monument, my mind’s eye was blinking back tears as I reverently murmured, “WOW.”

Simon, Otto and I were in Gettysburg, PA to gather material and photos for future freelance articles. I was also on assignment for The County Compass, the weekly newspaper for which I was a staff writer. My charge was to learn and write about the role North Carolinians played in the battle that raged in around the town for three bloody days beginning July 1, 1863. Thanks to the generosity of Destination Gettysburg and the expertise of our guide, we could honestly say, “Mission accomplished.”

On that warm October afternoon, it was impossible not to be moved by the ferocity of the battles that had taken place where we walked, stood and listened. The 51,000 men who were killed, wounded or taken prisoner. The generals who sent these men into battle. The 17-mile-long wagon train that carried wounded Confederate soldiers from Gettysburg during General Robert E. Lee’s retreat. The horrors of the ill-equipped makeshift hospitals left in the town. These stories and many others that told of the triumph and tragedy that had made Gettysburg famous, stretched our imaginations, as scenes of the battle formed in our minds. But, it was the North Carolina State Monument and the men who inspired its creator that brought it all into sharp focus.

You can find the North Carolina State Monument midway along West Confederate Avenue at Gettysburg Battlefield Memorial Park. This symbol of North Carolina’s sacrifice and contribution to the battle was born of the mind, heart and hands of Gutzon Borglum, the sculptor who began the carving of the four United States Presidents on Mount Rushmore. The monument was cast by the Kunst Foundry in NYC, and stands 15 feet 9 inches high.

Dogwoods, North Carolina’s State Tree, partially encircle the monument. The five figures representing the hearts and souls of the North Carolinians who fought here are portrayed in forward motion, as they would have appeared at the commencement of the ill-fated Picket’s charge.

Perhaps the single most apparent aspect of the North Carolina Monument that defines it and sets it apart from the others on the battlefield is its absence of sharpness and clarity. Whereas other state monuments depict their soldiers in minute detail, from the buttons on their uniforms to the authenticity of their weapons, the figures on the North Carolina State Monument were deliberately blurred by the artist to capture them in motion. This has the effect of drawing the observer’s focus to the emotions on the men’s faces.

One of the soldiers depicted on the monument is the wounded leader of the charge, pointing toward Cemetery Ridge, urging his comrades on into a battle in which he could not participate. The face of a large man bears a clear determination to succeed in crossing the battle field. A bearded veteran  whispers encouragement to a young, frightened soldier. A flag bearer pushes forward, holding the standard high. Rushing figures and expressive faces combine to tell the tale of North Carolina’s soldiers on July 3, the final day of the Battle of Gettysburg.

Borglum used photographs of Confederate soldiers to inspire him as he crafted the figures on the monument. But his most famous muse was Orren Smith, the monument’s flag bearer and the North Carolinian who designed, the Confederate flag.

Following the Civil War, stories began to surface regarding the troops from North Carolina. Some in Virginia went so far as to say that North Carolinians turned and ran at Gettysburg. In fact, nothing could be farther from the truth.

The breakdown of North Carolina’s contribution to the Battle of Gettysburg goes like this: 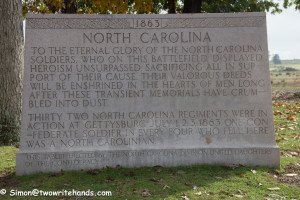 Sadly, I couldn’t get anywhere near the monument to run my fingers over it. A fence  had been erected to prevent vandals from causing damage, such as had been perpetrated in the past. But what I learned and felt at its site will always stand as a painful reminder that victory in war comes at a heavy price. The valor and dedication depicted on the faces of the soldiers on the North Carolina State Monument will never fail to evoke a “WOW:”