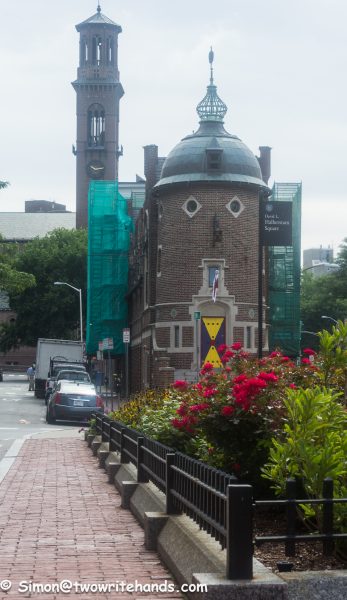 Our small walking tour group followed closely behind the young man in the safari suit and pith helmet, anticipating his next tale from nigh on 400 years of Harvard University history. Our guide, Professor William James of the late 1800s, tugged on some of the many threads of humor woven tightly into the tapestry of this institution’s grand past. Stories of creative pranks perpetrated by students against a backdrop of serious learning made our 70-minute tour a WOW of an experience.

In reality, the 19th century Harvard psychology and philosophy professor, William James was Cameron Goslin, a 2013 aspiring actor and professional tour guide. And a darn good actor he was; staying in character as if he actually had just resumed teaching following his recent return from Africa. He spoke of the university’s rich history since its inception in 1636; the Revolutionary War, the Civil War, patrons and printing presses.

From the moment you arrive at the Visitor Information kiosk at the Harvard Square T Stop. You immediately begin your journey into the past. All the tour guides are dressed in such period clothing as hoop skirts and top hats. And although they really know their Harvard history, these professional storytellers are unaffiliated with the university itself.

It was none other than Alice Mary Longfellow, daughter of the famous American poet and Harvard professor, Henry Wadsworth Longfellow, who first welcomed us. This was where her father had lived, worked and created. And she was unashamedly proud of Harvard University. 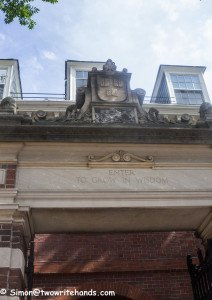 America’s oldest learning institution, “began as New College,” the purpose of which was to serve as a seminary for the education of clergymen. The school changed its name to Harvard University, in honor of it’s first major benefactor, the Reverend John Harvard.  Harvard added medical studies to its programs in 1782, divinity in 1816 and law in 1817. On a less academic note, crimson was adopted as Harvard’s official school color in 1910.

The 20th century, saw a gradual increase in diversity among Harvard’s student population. This was due in large part to an increase in opportunities for financial aid offered by the school. Harvard’s efforts to ensure the school remains diverse have continued into the 21st century through its outreach to students of varying financial means who achieve academic excellence.

Today, Harvard University has 17,000 students in regular enrollment, as well as 30,000 students who take non-degree courses.

As the school has expanded and thrived academically, the same cannot be said for some of its campus structures. None of the original buildings survived, But their locations are identified by brass markers. The 18th and 19th buildings that grace the Harvard campus have their stories to tell, and people like Cameron, who delight in keeping the university’s history alive, tell them with historical accuracy and unabashed enthusiasm.

I know you want to hear the stories. Okay, I’ll give you a small taste. But it won’t be enough to spoil your experience should you find yourself in Boston with a couple of hours to kill and a yen for something a little different.

Let’s start with the bronze likeness of the man for whom Harvard University was named. John Harvard was an British minister who set sail for the New World in 1637 to become a Charlestown preacher. Unfortunately, he died of tuberculosis shortly after his arrival in 1638. Harvard left half of his estate to New College, along with his personal library of 400 books, even though he had never been one of its students.

It took nearly two centuries before a statue honoring John Harvard was commissioned. What wasn’t in the plan for the statue was the trio of lies that would keep it company throughout the centuries.

Lie 1: The statue is of John Harvard.

The Truth: Since there are no documents of photos or even a description of John Harvard, nobody, then or now, has a clue as to how the man actually looked or what he would have worn.

The Truth: John Harvard was not his namesake’s founder. To put it bluntly; he was the main money man. In fact, he never set foot on the school’s property.

The Truth: Contrary to that pesky inscription. the founding took place two years earlier in 1636, as the result of a vote by the Great and General Court of the Massachusetts Bay Colony.

Even today, poor old John gets no respect. It is believed to be good luck to rub his toe. This frequent rubbing has massaged one foot to the point where it is visibly shinier than the other.

But the indignities don’t stop there. In 1847 a student placed a bed pan under Reverend Harvard so he could go to the “John”. Perhaps it has come in handy for the countless inebriated students who have sat in his lap 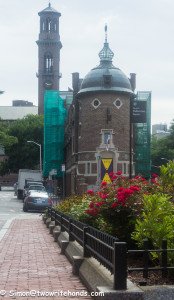 Office of the Harvard Lampoon

As for the rest of the stories, you’ll have to endure the delight of finding out for yourself. Pranks that garnered the most interest from our group involved the long-standing rivalry between the two campus student newspapers; the Harvard Crimson and the Harvard Lampoon. The back-and-forth pranks range from childish to potentially disastrous, and from petty theft to kidnapping to a copper ibis that nearly became the center of a cold-war incident that left a Soviet diplomat shaking his head and saying, “I am unsmiling.” 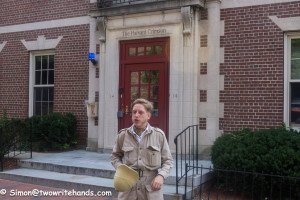 Guide Cameron Goslin in front of the Harvard Crimson

But Harvard campus life isn’t all fun and games. After all, students are there to be educated, and the Harry Elkins Widener Memorial Library literally smells of learning. As you pass the building, you can catch the scent of old books wafting through the vents. Oddly, the olfactory experience, although not particularly pleasant, is somewhat comforting and reminiscent of how knowledge might smell.

The Widener Library contains upward of 3.2 million volumes resting upon the equivalent of over 5 miles of bookshelves. How this enormous edifice came to be as a result of the sinking of the Titanic is another fascinating story. 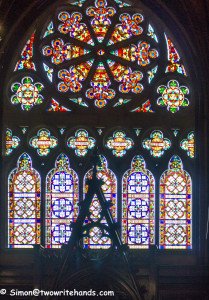 If you’re lucky, you may have the opportunity to step into Memorial Hall, which was built in memory of Harvard students and alumni who died for the Union cause during the Civil War. The Victorian Gothic architectural design was commissioned and the structure erected between 1870 and 1877. If you can, stop and let your eyes drink in the timeless elegance of windows adorned with stained glass by Louis Comfort Tiffany and John LaFarge.

The building is comprised of three separate areas, one of which is a 1,166-seat theater, which has seen the likes of Winston Churchill, Theodore Roosevelt, Martin Luther King Jr., and Mikhail Gorbachev. Another area is the current location of the Harvard Freshman Dining Room.

The Harvard Historical Hysterical Tour is a perfect family activity. However, if you are the parents of college bound students, you might want to carefully watch the faces of your beloved offspring. If you see WOW expressions during more tales of mischief and mayhem, it may be a sign of future headaches.

Tickets for the Historical Hysterical Harvard Tour available in English, Spanish, French, and Italian are $15 for adults, and $12 for students and seniors. Children 8 and under are admitted at no cost.

Our appreciation goes out to Cambridge Historical Tours for their hospitality. As always, all opinions are my own.