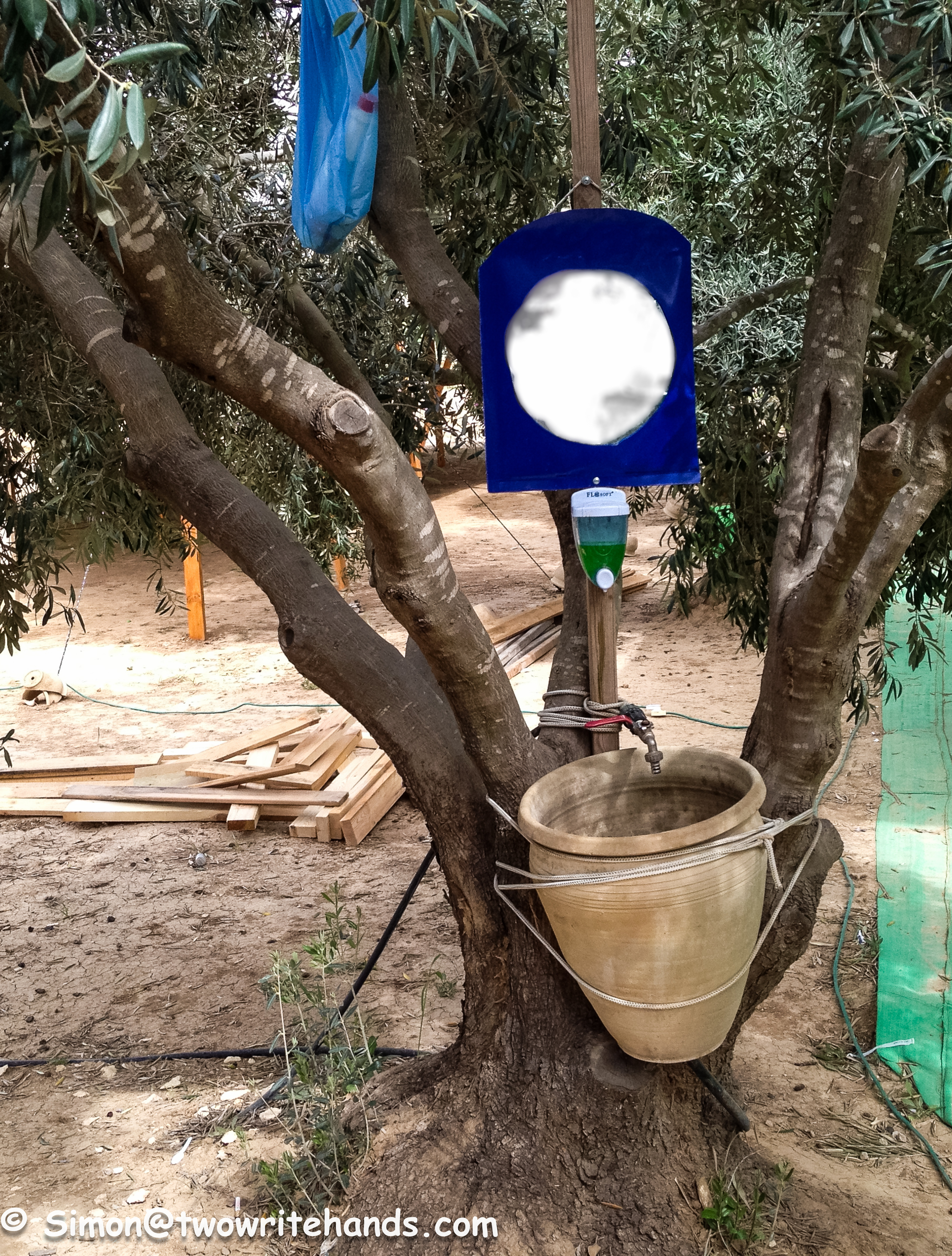 Hot Coffee and a Cool Place for a Bar Mitzvah

We were in the desert, and deserts are supposed to be hot. Right? Well, the Negev in Israel obviously didn’t get the message on that morning in early March. Oh, it was warm to be sure, but not the preview of hell I was expecting. Another thing I didn’t expect was the hospitality there was to be enjoyed in a Bedouin tent in the middle of nowhere that made a WOW of a story to tell back home.

Simon, Otto and I were on a long-overdue visit to my family in Israel, and my cousin, Eli, and his family couldn’t have been more gracious hosts. Everything was carefully considered, and our week of adventures turned out to be truly spectacular.

On our second full day in Israel, we set of for what was to be our first of two ventures south into the Negev Desert. 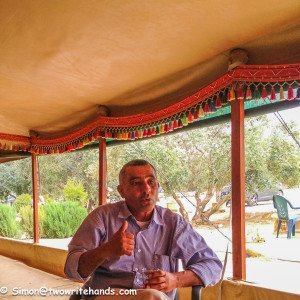 Our first stop was one of those unexpected joys that make traveling with people who know the area such a treat. A short way down a roughened path off the main road to Beersheba, stood an authentic Bedouin hospitality/events tent. The establishment was owned and operated by an acquaintance of Eli’s, Abu Yusuf, and his family.

I just got off a Skype call with Eli (isn’t technology wonderful?). Apparently, neither of us can remember the name of Abu Yusuf’s place. In fact, we’re not even sure it even had one. What we’re sure of, though, was that our memories of that day are clear, and pleasant.

By the time we reached our destination, it was mid-morning. As we sat in the shade of the tent’s interior sipping sweet, strong Turkish coffee, I interviewed Abu Yusuf about his thriving business.

Although the gracious Bedouin spoke no English, Eli was kind enough to translate, and through our conversation, I came to know a very smart and thoughtful individual.

Abu Yusuf told us that he had carefully chosen the location for his business, because of the through-traffic on the road. To him, it just made sense.

Forget mass-marketing strategies. Almost all of his business comes by word-of-mouth. In fact an American family that happened upon the tent while visiting Israel, had such a delightful experience, they booked it for their son’s upcoming Bar Mitzvah. Now that’s one party to which I would have loved to have been invited. What a lucky kid to have been allowed to celebrate his special day in such a unique venue. The idea had fun written all over it.

Abu Yusuf’s approach to his customers is down-to-earth and refreshing. He said that all people are the same to him; whether they are famous or not. They receive the same treatment. And, based on our experience, that’s a good thing.

By this time, we were sampling a mild but flavorful herbal tea made by Abu Yusuf himself. When I asked if we could purchase some of his blend, he said that it was not for sale. He then offered us a packet of black tea leaves and one of his secret herb mix as a gift.

Since to refuse would have been taken as an insult, we graciously accepted this kindness. 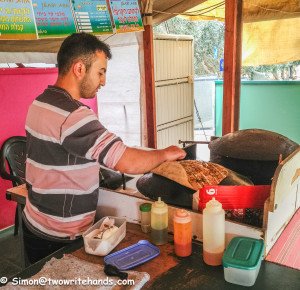 It was now time to leave. The mouth-watering aroma of traditionally seasoned meat hitting the grill for the lunch crowd was communicating enticing signals to our stomachs. Had it not been for the fact that those afore-mentioned stomachs were still replete from a late,, delicious and substantial breakfast, we would have most likely succumbed to the temptation.

After purchasing jars of local honey and gooey, nutty sweets to bring to the folks back home, we headed for the restroom. Too much information? Perhaps. But the innovative contraption we discovered when we arrived at the hand-washing phase made this activity worthy of mention. 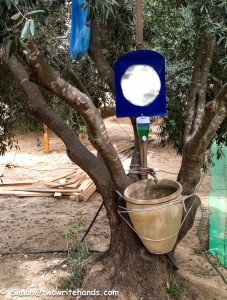 Because water is such a precious commodity in the desert, conservation and creativity are prerequisites for survival in its unforgiving climate. To this end, the resourceful Abu Yusuf had constructed a clever set-up, where the water from the outdoor sink ran down to where it could be recycled to keep the toilet in perfect flushing order.

One of the many reasons I love travel so much is the unexpected experiences such as a welcoming Bedouin tent in the Negev. I expect to be awed by marvels like the Eiffel Tower, but spending time with the likes of Abu Yusuf in his unique establishment will always evoke the most heart-felt WOWs.