[Weekly WOW #054] Marveling at the Marble in Carrara, Italy: 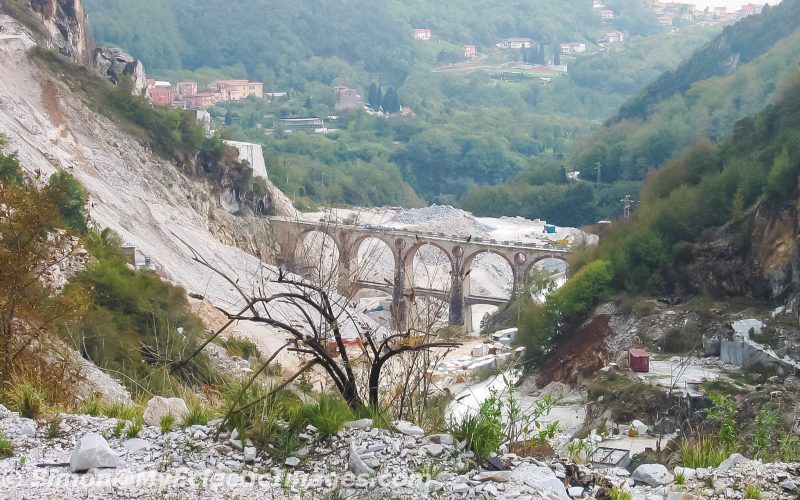 Birthplace of Some of the World‘s Most Beloved Treasures.

There is a mountain at the northwest tip of Tuscany that, for centuries, has enabled some of history’s most talented hands to fashion timeless art. From Rome to London, to Manila, countless millions have gazed in awe at these incredible gifts to the world, and uttered, “WOW!” On a warm day in October, 2003, Simon and I had the privilege of standing where so much beauty had originated, and saying a “WOW” of our own. 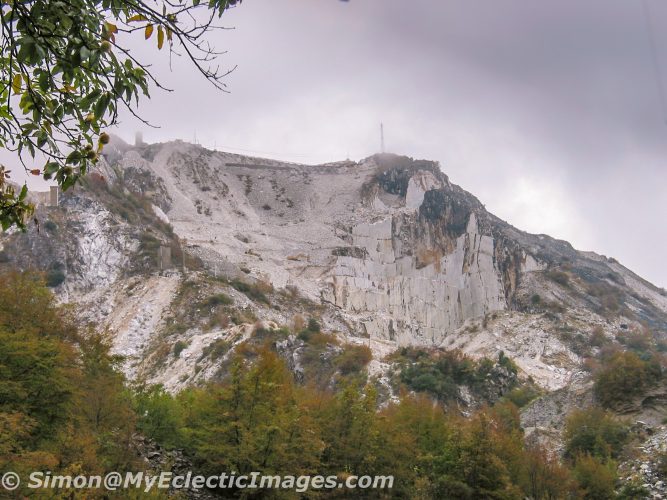 An impromptu visit to Carrara, following a dream-like week in Tuscany seemed a perfect way to say good-bye to one of the most captivating regions in Italy. We were en route to Switzerland when we decided to take the short detour that brought us to the small town and the mountain from which some of the world’s finest marble is extracted.

For the Romans, Carrara marble turned out to be the ideal substance for the building of their most valued structures, including the Pantheon and Trajan’s Column in Rome. Since that time, Carrara’s quarries have yielded more marble than any similar operation in the world. 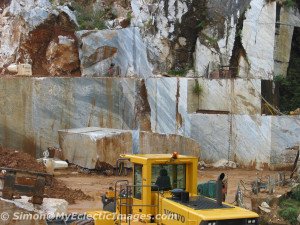 Marble Block Cut from a Quarry

Statuario was the purest and most prized white marble to be harvested from Carrara’s quarries. Sadly, the end of the 20th century also saw the probable end of this high quality deposit in the vicinity of Carrara. Other grades of marble are formed from a combination of minerals in the limestone as heat and pressure convert it into marble Approximately a million tons of this marble are exported every year.

We went as far up the mountain as vehicles were allowed, then got out and strolled around. The quarries consisted of huge swaths of white rock that continually grew as workers cut into the mountain. The color and texture gave the surrounding area a surreal atmosphere. 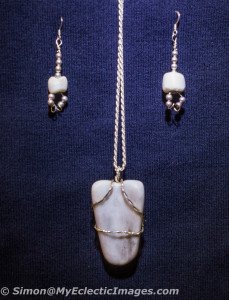 As we meandered, drinking in the sunshine and our unique surroundings, Simon occasionally stopped to pick up several pieces of loose marble. “For making paperweights?” I mused. It wasn’t until Christmas that I learned what he had in mind. My wonderful husband had polished and crafted some of the pieces of marble into a necklace and earrings, set in silver. I still wear and treasure those pieces, as well as the experience that made them possible.

Not surprisingly, the town of Carrara is the location for academies dedicated to sculpture and fine arts, a museum of antiquities, and an annual marble technology fair. You will also find shops where you can purchase souvenirs such as marble coasters, small marble statues and other attractive, items. Remember, marble is heavy, and what ever you buy, you’ll have to carry.

Carrara is the point from which marble is exported internationally. While on the home front, marble from Carrara and other quarries is sculpted for commercial sale.

It is difficult to travel to any country without encountering Carrara marble. Here is a small sampling of what you can find and where:

Recently, though, Carrara marble has shown up in some rather unconventional places. A car chase scene in the 2008 James Bond movie, “Quantum of Solace”, was shot with the quarries in the background, and rapper Kanye West is said to have commissioned a Carrara marble table with the names of his and Kim Kardashian’s wedding guests inlaid in gold, when the two tied the knot in Florence.

Massive Machinery to Move a Block of Carrara Marble

Also, the late and far from great, Osama bin Laden’s family is now the largest shareholder in an Italian firm that quarries Carrara marble. The family, who officially – and wisely – disowned Osama in the early 1990s, use ever-increasing quantities of marble for the construction of mosques in Saudi Arabia.

Carrara marble has sold for as much as 3,000 euros a ton, even though the cost of quarrying the precious stone is less than 100 euros per ton. But perhaps the price of marble is much higher than we thought. 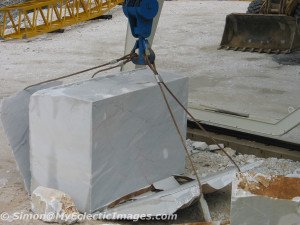 Block of Marble being Trimmed

The dark side to the beauty resulting from Carrara marble is the danger to the men who work the quarries. In 1911, 10 workers were in the wrong place at the wrong time. They were eating their lunch under a precipice, when the cliff face collapsed, crushing them to death.

In recent videos shot at the Carrara quarries, you can see some of the men performing hazardous tasks, surrounded by loud noise, wearing little or no protective gear. And missing fingers, resulting from accidents that could have been prevented, are all too common.

Perhaps it should come as no surprise that by the end of the 19th century, Carrara had evolved into a hot-bed of discontent and anarchy. Quarry workers and stone carvers, were particularly susceptible to radical influences from outside the Carrara area. These workers were instrumental in bringing organized labour to the quarries and beyond.

From their part in the Lunigiana revolt of 1894, to the formation of the International Federation of Anarchists in 1968, unrest and upheaval have become the workers’ legacy to the world’s lust for exquisite marble. 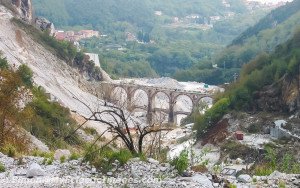 One of the Valleys at a Carrara Marble Quarry

Should you some day find yourself in the neighborhood of Carrara, take the opportunity to drive up the mountain, get out of your car and feel the uneven terrain under your feet. For a moment, stand very still. You just might sense the marvels and mishaps that well may have been generated from that very spot. And when you do, you will surely say, “WOW!”

Two YouTube videos (see below) illustrate some of the processes for extracting the marble and the official Carrara website gives more information about the town and its treasure.