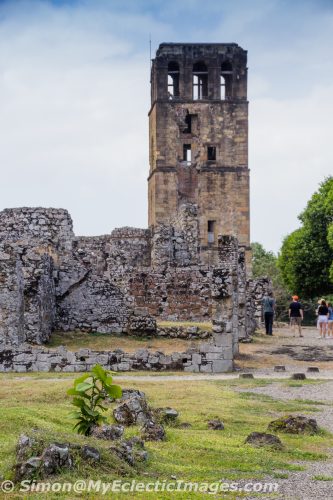 Ruins of a Once-Proud City Whisper of Its Glory Days.

“This shouldn’t take long,” I predicted, as we stepped off the air-conditioned bus and into the Panama City heat and humidity. At first glance, Simon, Otto and I were standing in front of piles of rubble and outlines of streets, dotted with a few gutted structures. But our short visit stretched into over an hour’s wandering, as our “initial ho-hum” became”a series of WOWs! 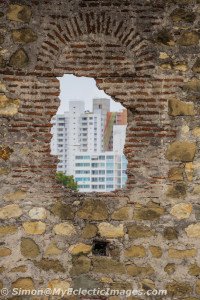 From Old to New. A View from Casco Viejo

Founded in 1519 by Spanish Conquistador, Pedrarias d’Ávila, Casco Viejo (Colonial City) is the archaeological site of the oldest European town on the Pacific coast. Its prime location made the city a busy port, enabling it to evolve into an important center of commerce, as well as the seat of a Royal Tribunal.

In 1513, Vasco Nunez de Balboa had discovered the Pacific coast, and Viejo Antiguo became a jumping-off point for further exploration. For his trouble, de Balboa had, among other things, a Panamanian currency and a quite drinkable beer named after him.

The city might have lived long and prospered, save for three devastating events. In 1621, a major earthquake followed by a fire in 1644, did serious damage to the proud buildings and religious edifices. However, it was the notorious pirate, Henry Morgan, who, in 1671, ravaged the town, almost destroying it completely. (And they named a rum after this guy?) This was the point when Viejo Antiguo was abandoned by its surviving inhabitants, never to be rebuilt. What we explored that afternoon were the remains of a settlement that, despite it importance, had died in just under one-and-a-half centuries at the hands of nature’s fury and man’s cruelty.

A peninsula only five miles away was selected for the construction of a new town. The bitter lesson learned from Morgan’s assault served the settlers well in their choice for the site of their new beginning. This was a location that could be defended.

Making good use of what could be salvaged, the settlers brought dressed stone, and even entire church facades, from what was left of their former home. The latter were rebuilt at the new location, and some can still be seen in what is now known as Panama City’s Historic District.

Meanwhile, back at the rubble, what had been a thriving town was left to languish for centuries. Following the paths of Viejo Antiguo’s original streets, we read the stories of the buildings that had once teemed with life from descriptions on low signs. Had it not been for these markers, we would have had no idea of the purpose and former utilization of the structures. There were partial foundations and walls that hinted at how the Colonial architecture of the time appeared.

Although Viejo Antiguo is now a UNESCO World Heritage Site, the Panamanian government didn’t always appreciate its historic and architectural value. The Casas Reales, from which the city was governed, was, at various times, allowed to be used as a landfill and horse stable. This complex was protected by a moat, and held within its walls the customs house, royal treasury, prison and the governor’s residence. Now all that remains of these grand structures are scattered sections of their walls.

Sadly, the ruins of the hospital, or what remains of them, were mindlessly scattered when a side road was recently put in.

Two of the best preserved structures can be found among the ruins of the Iglesia y Convento de Santo Domingo (Church & Convent of St Dominic),and Casa Alarcón, the town’s largest known private residence. The convent is believed to have been built in the 1570s and the addition of the church was completed at least 20 years later. The private residence is believed to have been constructed in the 1640s.

If the number of churches and convents are any indication, religion was a central part of life in the 16 and 17th centuries. We perused ruins, in varying stages of decay, of buildings devoted to God.

Facing what had been the main square, ruins of City Hall and the Casas de Terrín can be seen. The houses had been erected by a member of Viejo Antiguo’s wealthy class.

There are two bridges worthy of mention. The Puente del Matadero, which means Bridge of the Slaughterhouse, which is as ugly as it sounds. A clumsy-looking structure, whose restoration efforts left much to be desired, the bridge was named for – you guessed it – a slaughterhouse.. 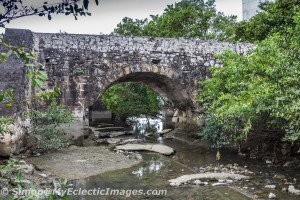 Puenta del Rey – Bridge at the Entrance to Casco Viejo

The Puente del Rey (Bridge of the King), is not only easier on the eye, but is far more historically significant than its homely counterpart. This bridge is believed to be the oldest bridge still standing in the Americas, having been constructed in 1617. 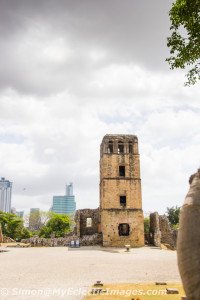 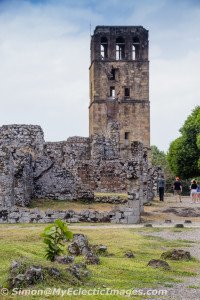 The structure with which we became best acquainted was the Cathedral de Nuestra Señora de la Asunción. Of all the buildings on the site, this was the best preserved of the lot.

Built in the traditional style of the early 17th century,, the cathedral was designed with its two side chapels creating the appearance of a cross when viewed from above. Since, at that time, the only ones looking down from the heavens were those who belonged there, this. was a way of sending prayers and praise directly upward. 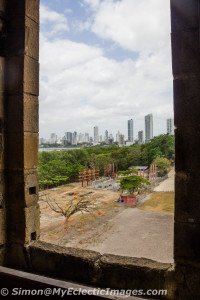 The main facade is long gone, but the outer structure and bell tower stand in silent memory of those who once worshiped within the sanctuary of its walls.

We climbed the wide, even stairs – not the originals for sure – to the top of the bell tower that rose from the rear of the cathedral, and looked out at one of the most unusual views imaginable. From our vantage point we could see the Pacific ocean. and the glass and concrete buildings of modern Panama City. Below and into the middle distance, there was the original layout of Viejo Antiguo with its main square, streets, bridges and an assortment of ruined buildings.

Sometimes, things are exactly as they seem. Most of the time, though they are not. And sometimes we choose to take a chance on further exploration of the seemingly ordinary, because if we don’t take that chance, we just might be missing out on a really terrific WOW!

More information on Viejo Antigua can be found on the Lonely Planet website.