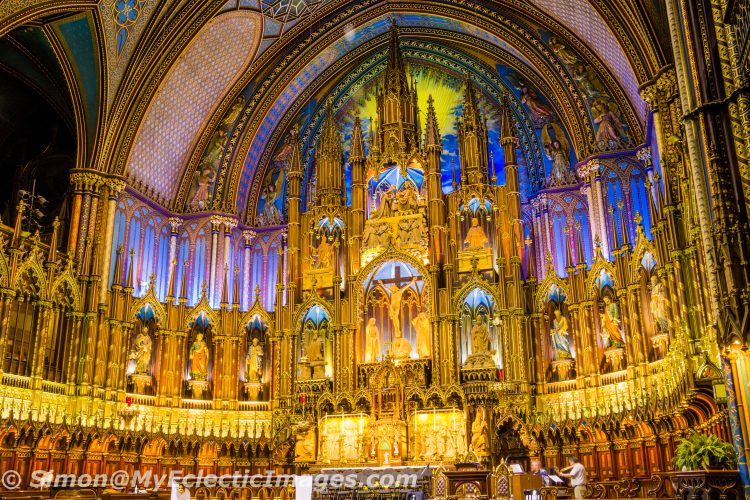 History and Expert Craftsmanship Combine to make this Church a Montreal Must-See.

Through nearly three decades of growing up, attending college and working in what is known as the Paris of North America, I had never set foot in Notre-Dame Basilica. This travesty has now been rectified with a long overdue “WOW!”

Montreal is replete with cultural, historical and recreational venues – Mount Royal Park, the Olympic Tower, and some of the best restaurants anywhere, to name a few – but one of the most popular is Old Montreal. With its cobbled streets, historic buildings and quaint shops and eateries, this area of Montreal is where the city was born. Today, it is preserved, revered and yes, exploited. The heart of this vibrant part of town is the famous Notre-Dame Basilica. 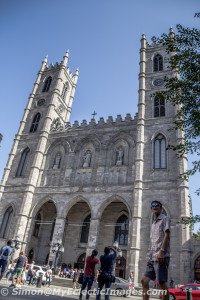 Exterior of Notre-Dame Basilica in Montreal

On a recent visit to my old stomping grounds with Simon and son, Kevin, we granted the latter his wish to see Notre-Dame, while doing something we should have both done during our years in Montreal.

The original Notre-Dame Church was built in 1672 in what was then known as Ville Marie, and now known as Montreal. But by 1824, the congregation had grown to the point where the church could no longer contain its ever-growing number of worshipers. Something had to be done.

Enter New York architect, James O’Donnell, who had been commissioned to design the new church. The bulk of the construction took place between 1824 and 1829, with the sanctuary completed in 1830.

O-Donnell died in 1830, without seeing the completion of one of his finest works. Born an Irish Protestant, he converted to Catholicism on his deathbed, fearing that otherwise he would not be allowed to be buried in the church he designed. Marked by a plaque, O’Donnell’s burial place is actually the only grave in Notre-Dame’s crypt.

Notre-Dame’s two towers were both erected more than a decade after O’Donnell’s death. “La Persévérance” (Perseverance), the western tower, was completed in 1841. It is home to the church’s great bell, which weighs 11 tons. From “La Tempérance” (Temperance), the eastern tower, a 10 bell carillon fills the air with rich, melodic tones. This tower was completed in 1843. 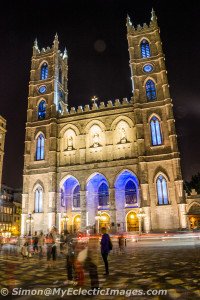 The Front of Notre-Dame Basilica by Night

Unlike Notre-dame Cathedral in Paris, the exterior of Montreal’s Notre-Dame, is surprisingly simple and unadorned, with an air of austere dignity. Looking at Notre-Dame from the outside, you may find it less than impressive, but enter the basilica, and you will come face-to-face with one of the most remarkable and breath-taking church interiors in North America. The stained glass windows, religious paintings and statues, as well as ornate carvings found in every part of the church, are a feast for the eyes. But the main altar, decorated with a stunning blue background and gold carvings, is totally arresting in its grandeur. 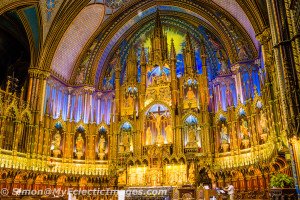 The Altar and Screen in Notre-Dame Basilica 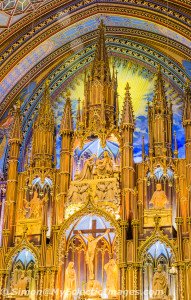 Closer View of the Screen Behind the High Altar

No good altar should go to waste, so you will find the high altar from the old church on the west wall of the side chapel dedicated to Saint Marguerite d’Youville.

Note the columns in the nave. An Italian artist living in New York, named Angelo Pienovi, painted them to resemble authentic veined marble. 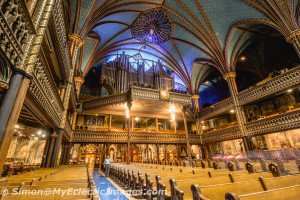 The 31 foot Casavant pipe organ, installed in 1891, was the first of its kind to sport adjustable-combination pedals operated by the use of electricity.

Not to be missed is the smaller and more intimate Chapelle du Sacré-Cœur (Chapel of the Sacred Heart), located behind the main sanctuary. Designated primarily for weddings and funerals, this lovely chapel was completed in 1888.

Tragically, on December 8, 1978 the chapel was severely damaged by the evil hand of an arsonist. Rebuilding and restoration began almost immediately following the fire, The original integrity of the chapel was meticulously retained, while incorporating just enough modern touches to make it more user friendly. The Chapel of Notre-Dame du Sacré-Cour reopened in 1983, and now stands as not only a symbol of faith, but also of survival.

Notre-Dame received two high honors during the 1980’s. Its status as a Church was elevated to that of a Basilica on April 21, 1982, by Pope John Paul II. Then, in 1989, the basilica was designated a National Historic Site of Canada.

Notre-Dame has been the setting for many high-profile ceremonies. The provincial state funeral for 1960’s hockey superstar, Maurice “Rocket” Richard who played for the the Montreal Canadiens – a childhood hero of mine – was conducted in front of thousands, who gathered to pay their respects from both inside and outside Notre-Dave.

And then on October 3, 2000, Justin Trudeau stood by the high alter as he gave the eulogy for his father, Pierre Elliot Trudeau, Canada’s 15th prime minister, during the state funeral in his honor.

On a happier note, Notre-Dame was the venue for singer Celine Dion’s wedding to her manager, René Angélil, in 1994.

Although I didn’t know it at the time, Notre Dame, while it was still a church, was a special part of my Montreal memories. The Cote des-Neiges Cemetery my friends and I would walk passed going to and from Mount Royal, is affiliated with the basilica. We would either walk past the countless rows of headstones in reverent silence, or one of us, usually me, would start cracking morbid, inappropriate jokes. The cemetery lays claim to being the largest in Canada and the third largest in North America.

As we left the basilica and stepped into a balmy September evening, there was no doubt that fighting the Labor Day traffic and crowds had definitely been worth the effort. After all, what WOW isn’t?

Notre-Dame Basilica is an ideal venue for high quality choral and organ other musical programming, including  an annual performance of Handel’s Messiah.

Price of admission to the church, unless you are attending mass or other function, is $5.00.

A sound and light show entitled “And Then There Was Light”, which brings the history of the church to life, is normally offered evenings, Tuesday through Saturday (tickets are $10), but has been cancelled for 2015 due to ongoing renovations.

Notre-Dame’s official website contains a wealth of information about the basilica, its history and program schedules.