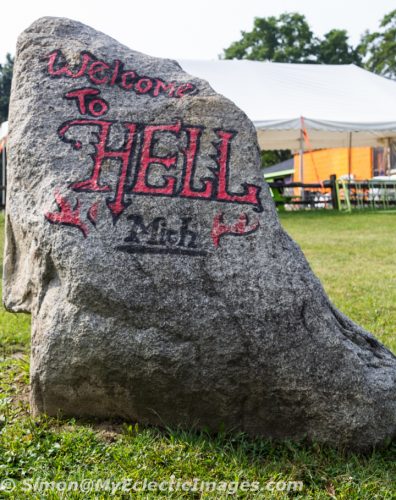 If This Tiny Michigan Town is a Preview to the Afterlife, We Have Nothing to Fear. 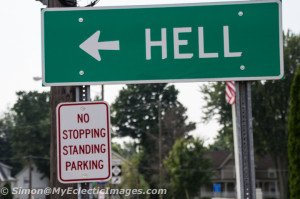 If you like small towns with friendly people, zero crime and a laugh a minute, then may I suggest you go to Hell. And if you do visit this dot on the Michigan map, when you finally catch your breath, you’ll surely say,’WOW!”

John Colone, a three-time failure at retirement, with a devilish grin and a wicked sense of humor, is the man to see. Simon, Otto and I had the sinful pleasure of spending time with him, and found him so engaging, we would have sold our souls for a few more of his sassy jokes. 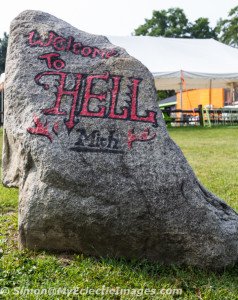 John greeted us warmly (Well, what else would you expect in Hell?) at his shop, “Scream’s Souvenirs and Helloween”. This is where he broadcasts the daily weather, so folks can decide if their location is hotter than Hell, or colder. We sat among t-shirts, mugs, magnets  and other hot-selling items, as I recorded my interview with John. Meanwhile, Simon was snapping photos of shirts that read “Get over it, Hell froze over”,“I’ve been to Hell and back” and “Hell is safer than Detroit”. 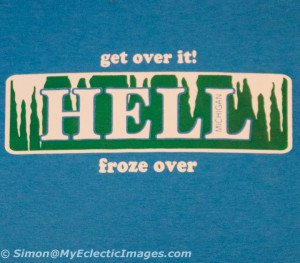 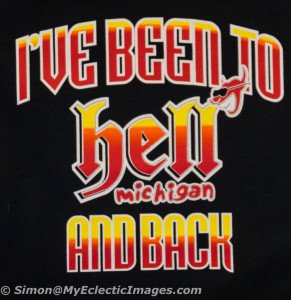 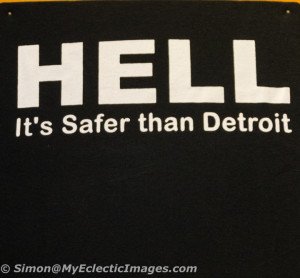 According to John, Hell acquired its name through George Reeves, who in 1838, built a grist mill – to grind grain into flour for the local farmers – and a general store on the banks of Hell Creek. He also ran a moonshine still, where the first seven or eight bushels of grain were used to make whiskey. Horses without drivers and wagons without drivers would return home from the still – I mean mill – and wives would proclaim, “He’s gone to Hell again!”

When asked what the town was called, Reeves responded with, “Just call it Hell for all I care. Everyone else does.” The town has been officially known as Hell since 1841.

So, what are some of the best ways to burn up some cash in Hell? Here’s a taste of what really happens when you get there.

Hell holds an Annual Hearse Fest, every September, which has been a draw for lovers of this end-of-the-line vehicle and other fun-loving irreverent souls. Open to all makes, models and conditions of hearses, the only stipulation is that the vehicle was, or still is, in service as a real live hearse. Trophies will be given, to winners in categories such as “Scariest Hearse”, “Best Casket Cart” and “How the Hell did it make it here?” Admission and registration are free.

Hell, population 72, consists of hellions, hell raisers and hell wannabes, and is divided into three sections: Uptown, MidTown and Downtown. There is exactly one building in each section. “We’re Michigan’s hysterical town,” explained John. “Everyone else’s is historical. We just want you to laugh and enjoy yourself.”

On June 6, 2006, – 666) 12,000 people descended on Hell to do just that. They came from as far away as Japan, Germany and Mexico. This crowd was much bigger than John had anticipated, but a wickedly good time was had by all.

Unfortunately, there will always be those who feel the need to impose their values on others, and Hell was no exception. On the afore-mentioned occasion, two bus loads of Baptist protesters from Flint, MI pulled up and began to demonstrate their displeasure with all this wanton joy.

Seeing this not as a hindrance, but a draw for even more people, John sent them ice cream and bottled water, telling them to please keep it up. “It’s fun,” John said, “I love the creativeness of what I’m able to do”. 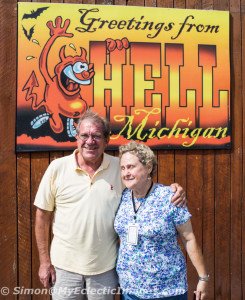 John Colone poses with me in front of a Hellish sign

Our morning in Hell had us smiling as we drove away accompanied by a “Have a hell of a good day, now get the hell out of here” from John. On an intellectual scale, Hell may come up short, but the creativity and sense of fun to be found there are definitely worth a hell of a WOW!

Hell is an unincorporated community located in Putnam Township, Livingston County, MI, approximately 15 miles northwest of Ann Arbor. You will find a hell of a lot more information on goings-on in Hell at the town’s official website.