[Weekly WOW #058] Indulge Your Curiosity at a Colorado Cannabis Dispensary: 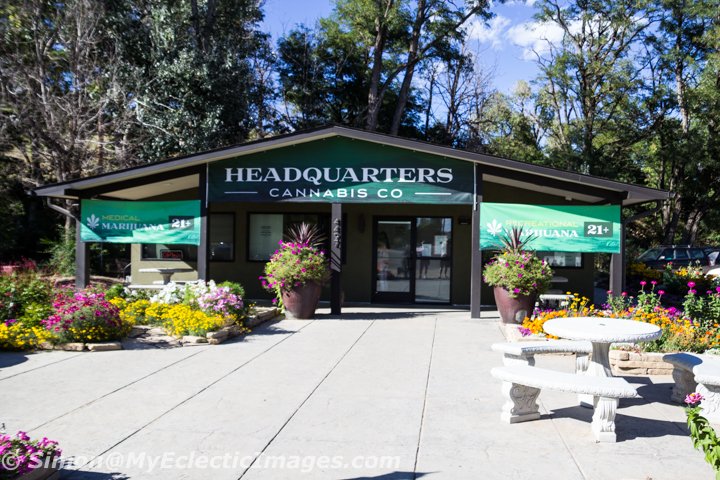 And Don’t Worry; Buying Is Optional.

It was like one of those dreams – you know the kind – where past and present collide, forming a series of disjointed events. My first experience with a Colorado cannabis dispensary was somewhat like that, creating a WOW of an unusual sort.

In Colorado, marijuana is legal, and it’s not just for college kids. So, on a recent trip to Denver, Simon, Otto, a friend who shall remain nameless and I decided to pay a visit to a cannabis dispensary.

Like me, our friend was an occasional pot smoker in college during the 60s. Also like me, smoking weed hasn’t been a major concern since then. But now that both medical and recreational marijuana is legal in Colorado, she occasionally partakes.

Cannabis dispensaries have become common throughout the state, and locating one is a simple matter of going online, or spotting one while driving around.

Our journey into the world of legal cannabis products began at the Headquarters Cannabis Co. in Longmont, CO. A concrete patio area led to the front doors of the establishment. It was lined with potted and planted flowers  showing off a profusion of color that gave a natural lift to our spirits.

Only a small number of people were admitted at a time, so we waited in the lobby, chatting amiably with fellow non-Coloradans from Alabama and Texas.

Our photo IDs were thoroughly checked before the locked doors would open, allowing us to enter the inner sanctum. I suspect the employee who approved our entry was wise to the phony kind, having probably used one to buy beer, once upon a time.

A pungent botanical fragrance greeted us as we entered; familiar, but without the scent of something nasty burning that I remembered from my misspent youth. 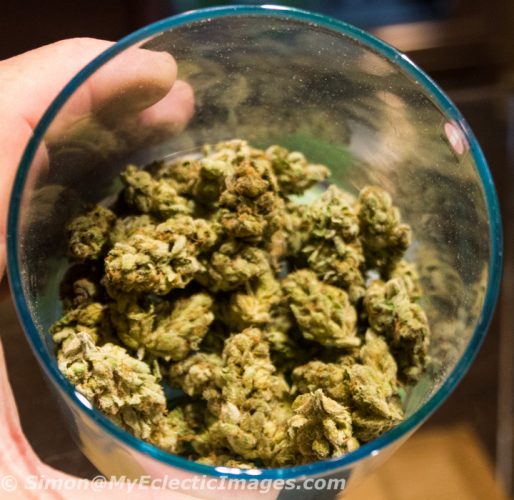 Whereas my college joints came from unknown sources, surreptitiously slipped to me by a friend, the dispensary consisted of three counters – one for medical, two for recreational – stocked with all manner of inhalants, edibles and accessories. You could choose from gummy bears, lollypops, and an assortment of buds with names like King’s Kush and Jack Flash. A box on the counter contained small glass pipes in a variety of colors and styles. Nothing, however, remotely resembled those old rolled joints of my college days. 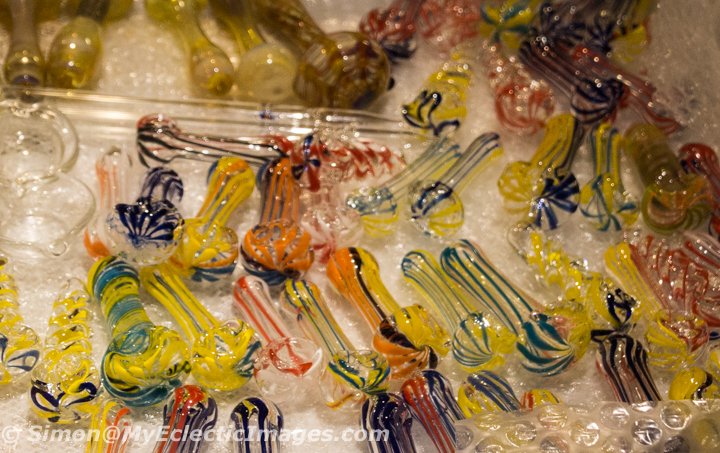 Unfortunately, the young lady who served us was less than helpful. She appeared to be totally disinterested in answering our questions, and what little information we did manage to extract was like pulling teeth. By the time we were ready to leave, I could have used some of that medical marijuana to counteract the effects of our encounter with Ms. Congeniality.

We did learn that Headquarters Cannabis Co. has been in operation for five years as a dispensary for medical marijuana, adding the recreational component when Coloradans voted to legalize marijuana in 2012. Voters have made the same choice in Washington State, Oregon, Alaska and D.C..

Headquarters Cannabis Co. produces the majority of its products, purchasing a small number of items from outside vendors.

When I was in college, pot was pot, and there were no subtleties associated with it. Now, you can purchase strains that will make you more relaxed, increase your creativity or give you a feeling of euphoria. Jack Flash is a variety offering the latter effect, and is considered a good daytime pick-me-up. If they had something that would make me more organized, I just might be persuaded to move to Colorado.

It was tempting to purchase a couple of lollypops to try, but the memory of the last time I ingested marijuana was too strong.

In my senior year in college, a “what was I thinking” boyfriend took me to a Rod Stewart concert. Beforehand, we stopped at the home of his ex-girlfriend, where her brother had prepared some brownies of the cannabis variety. Despite the addition of chocolate syrup, they were nothing short of disgusting, I barely managed to choke down my first and only bite.

Fast forward a couple of hours, and my boyfriend, very soon to be my ex-, was vomiting his guts out into a plastic bag. That was it for edible pot and the guy as well. I had a very strict “no puke” policy for the men I dated from then on.

Meanwhile, back in Colorado, there are a few important things you should know if you plan to purchase marijuana in the state:

Also, it’s important to understand what you’re inhaling or ingesting. This website has factual information in a concise format to help you make an informed decision as to whether or not cannabis is for you.

And so ends the tale of our venture into the world of legal marijuana. Now that we’re home, the only form of weed we can see is the stuff that has been choking the life out of our garden during the time we were gone. I guess the strangeness of the episode does make it a kind of a WOW, dude.

For information on where to find cannabis dispensaries in Colorado, this website will help you locate one in the area you are visiting.