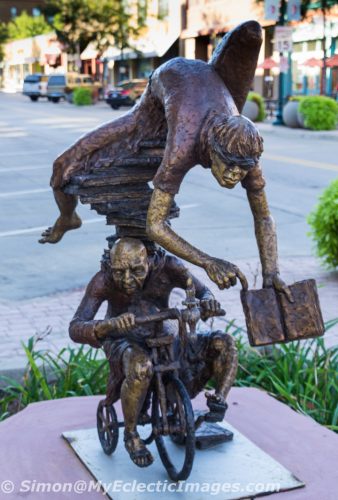 It was love the instant I touched that adorable, innocent face with pinchable chubby cheeks and ice cream dripping from his chin. Then, dog lover that I am, I caressed the sweet head and floppy ear of his Labrador retriever. Of all the entries Simon and I saw on the Sioux Falls SculptureWalk, the whimsical, Sunday with Jessie by Susan Geissler, stole my heart and won my vote. Nevertheless, each of the 55 sculptures on display was WOW worthy. 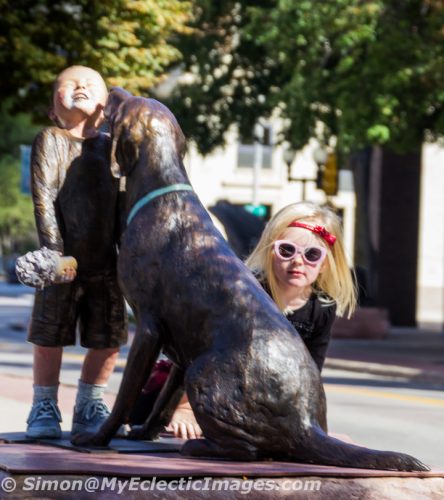 If the best things in life are free, then taking a walk through Sioux Falls’ downtown SculptureWalk deserves a seriously high rating.

Since 2004, the citizens of Sioux Falls have enjoyed the privilege of hosting some truly fine pieces of sculpture. These works can be appreciated year-round. As if this isn’t enough to make an entire city of 170,000 inhabitants smile, locals and tourists alike are treated to a brand new set of sculptures every year.

SculptureWalk is the kind of phenomenon that naturally seduces pedestrians into committing unspeakable acts such as slowing down, contemplating works of art and even talking to strangers. This is not only beneficial for the spirits of said pedestrians, but encourages patronage of local businesses along the walk. Talk about a perfect win-win-win situation for the contributing artists, the pedestrian psyche and the local economy.

Sioux Falls native Jim Clark founded SculptureWalk in the early 2000s to fill what he felt was a need for more public art in the downtown area. Through subsequent years, he volunteered his time and leadership skills to making SculptureWalk a key component of the gradual revitalization of his hometown’s downtown area. Finally, he left his high-level position at Xcel Energy to become Executive Director of SculptureWalk.

With the exception of Clark, who’s position is paid, the project is supported by a dedicated volunteer force that works year-round to make SculptureWalk a success.

SculptureWalk had 34 entries in its first year, which quickly grew to 55. Artists can submit as many as four of their works for consideration by a committee that looks for a variety of themes, styles and materials for each year’s SculptureWalk. What the sculptures must all have in common is that they are sturdy enough to withstand a year’s worth of Sioux Falls elements, while standing on display in the great outdoors. Also, consideration for safety is critical. No sculptures bearing real swords, and such.

So what do the selected artists get for their trouble, aside from a year’s worth of exposure in a vibrant downtown setting? For one thing, there is a total of $15,000 divided among Best in Show and People’s Choice prizes. The winning entry of the latter is purchased by the City of Sioux Falls to stand in a prominent public place. For example last year’s winner now resides in the lobby of the Washington Pavilion.

But, wait, there’s more for the artists. Individuals and businesses purchase several of each year’s offerings. Something that is enthusiastically encouraged. Since its inception, over 60 SculptureWalk pieces have been purchased by local businesses alone.

Each year, when the artists and their sculptures  make their appearance for the big installation, the permanent pink quartzite pedestals are ready to host the new arrivals. The entire process of welding the sculptures to the bases takes between five and ten minutes each. This leaves the artists, who have their expenses paid, the remainder of their two-day stay in Sioux Falls to enjoy the many fascinating historic, artistic and recreational aspects of this delightful city.

Although Simon, Otto and I aren’t artists, we spent our two days in Sioux Falls doing just that. The city, which for me had once been nothing more than a name on a map, took on a life and an enchanting persona of its own. The impressions with which I came away will define how I think of this midwest city for the rest of my days.

On the windy morning, warmed by the sun and the relaxed atmosphere of the area, we moved from sculpture to sculpture, exploring, marveling and sometimes shaking our heads in confusion. Sunday with Jessie was one of the last pieces we saw, but before my love-at-first-touch moment, there was much to appreciate and enjoy. Here’s just a taste of what SculptureWalk has to offer in 2015.

Perhaps the essence of SculptureWalk can best be understood through the following quote:

“The SculptureWalk Guiding Principle – To be the highest quality, most professional, financially strong, artist friendly, year-round outdoor sculpture program in the United States.”

Based on our all-to-brief experience, SculptureWalk lives up to this principal and more. Our first visit to Sioux Falls was a pass-through on our way from Montreal to Denver. For our next visit, it will be a destination, as it should be for you. Sioux Falls and SculptureWalk await you with a WOW of an experience.

SculptureWalk has its own website where you can find more information and see photos of this year’s 55 entries. But, take it from me, there’s nothing like getting up close and personal with the imagination and talent of these artists.

While in Sioux Falls Simon, Otto and I visited museums, a historic house, a magnificent cathedral, as well as Falls Park. We also managed to find the time to participate in two festivals on the same day. These are tales for future telling, but it all began with the SculptureWalk.