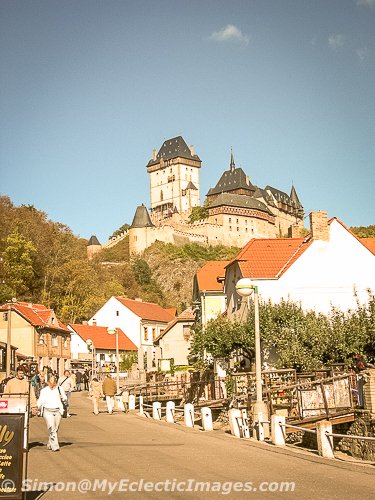 A Fairy Tale Come True in the Heart of the Czech Republic.

European castles come in all shapes, sizes, colors and degrees of preservation. I’ve definitely seen my share, but Karlstein Castle in the Czech Republic had the whimsical charm of something out of a Disney movie that evoked a WOW and a smile from the moment it first came into view.

Situated approximately 25 miles from Prague, a day trip to Karlstein Castle by train is a relaxing and stress-free way to see one of the Czech Republic’s most stunning medieval structures. With the exception of countless overnight trans-Atlantic flights, I have often found the journey to have been at least as pleasant an experience as the destination. And so it was with this ride. The train passed along the Berounka River, past lush scenery and through Martina Navrátilová’s home town of Revnice, making the time go by even faster. For Simon, C.J. and me, it was one of those days that stands in my memory as having been perfect.

Karlstein Castle from the Village

The mid-October morning was mild, with a light breeze and warm sunshine gently caressing our faces. As we progressed on our 30-minute hike from the train station, through the village of Karlstein and up the hill to the castle, the intensely blue sky provided a stunning background for the castle’s gray roofs, sandstone walls and red beams. The best view was from a distance, where the structure seemed to be wearing the day and the surrounding forest like exquisite finery that served to further enhance its majestic beauty.

Looking up at the Karlstein

As we drew closer, and the structure loomed above us, the castle took on a somewhat more imposing appearance; in tune with its age and history.

Another View of the Karlstein on the Road to the Castle

Holy Roman Emperor Charles IV – after whom Prague’s famous Charles Bridge was named – began supervision of the castle’s construction in 1348 as a fortress to protect the treasures of the Holy Roman Empire: jewels, archive and such. The original structure was completed in 1365 with the consecration of the Chapel of the Holy Cross in the Great Tower.

For the next 300 years, wars, fire and a primitive form of biological warfare plagued the castle. Biological warfare? Yes. During a siege of the castle, dead bodies and wagon-loads of dung were thrown over the walls, infecting the defenders, and causing them to fall ill. And that’s without the misery the stench alone must have caused.

View of the Village from the Ramparts

In 1619, the Bohemian crown jewels and the archive were removed to Prague for safe keeping.

Finally, the castle was conquered by the Swedes in 1648, after which it succumbed to neglect and disrepair.

In 1887, reconstruction began, and was completed in 1899. The work was carried out in the neo-gothic style we see today.

Built upon a promontory, Karlstein has all the accoutrements of your standard castle: ramparts, towers, royal living quarters, chapels, heavy gates a drawbridge and, of course, a moat. Perhaps I’ve become jaded over the years, but the castle exterior was more interesting and pleasing to the eye than its interior. That’s not to say a look inside isn’t worth the time or price of a guided tour.

The Chapel of the Holy Cross, walls encrusted with precious and semi-precious stones, must have been a peaceful oasis for the castle’s occupants during turbulent times. The chapel also houses one of the world’s largest collections of Gothic panel paintings.

When you reach the top of the Great Tower, savor the view of the town and surrounding countryside stretched out below. View from the Karlstein Tower

Look down the Well Tower, which was the first section of the castle to be built. Despite excavations below the, level of the Berounka River, no water was found. Since the castle could not function without available water,. An underground channel was dug, which carried water from a nearby stream. Unfortunately, the water was only enough to supply the castle for a few months at a time. This meant that twice yearly, a floodgate had to be opened manually in order to replenish the reservoir.

The absence of an independent water source was obviously a strategic security flaw of the castle. Therefore, the location of this vital channel was treated as a state secret. Only the Emperor, and the burgrave knew of its existence. Of course the miners who excavated the top-secret water source knew, and this knowledge allegedly justified their execution before they could leave the construction site once their task had been completed.

Touring Karlstein Castle should take you approximately one to one-and-a-half hours. But there is enough to do in the area to make an entire day of it.

The town has an assortment of tourist-oriented shops and cafes, where you can purchase souvenirs – if that’s your thing – or rest your tired feet at a small table on a patio and enjoy a refreshing local beer and some hearty Czech food.

Hiking in the area of the Castle is a popular pastime, as is golfing at the nearby professional course that bears the castle’s name.

Karlstein Castle is more than just a pretty façade. Similar to the nation in which it resides, the castle has a tumultuous history of tragedy, triumph and strength, punctuated with flashes of brilliance. Spend the day, and you’ll leave with a host of WOW memories.

A visit to the castle’s official website  will provide you with all the necessary information on tours and tickets.

More photos can be viewed in Simon’s portfolio.

Do you have a favorite castle? Is there a special castle on your bucket list? Tell us about it in the comments, so we can add it to ours.