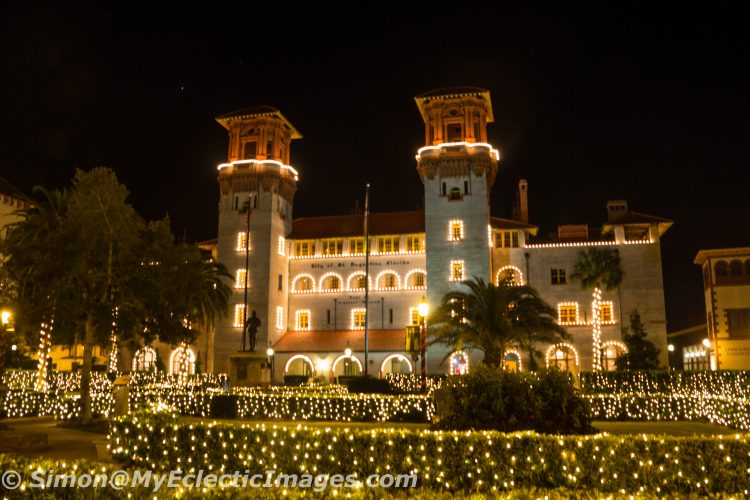 Let these Mechanical Marvels Carry You Back to Simpler Times.

There are two Ottos who have WOWed me in two different ways. Of course, Otto Von Guidemeister, my most competent guide, will always be top dog. But a man named Otto C. Lightner once bestowed a gift upon the city of St. Augustine that continues to WOW generations of visitors with his eclectic collections. From cut glass to tiffany glass, from buttons to salt and pepper shakers, from toy soldiers to a genuine Egyptian mummy – if it existed, Otto Lightner collected it. But the demonstration of several of his mechanical music boxes WOWed me the most.

Now, to be clear, we’re not talking about the wind-up jewelry boxes and trinkets that play familiar tunes in a tinkly tone. These are antique machines that replicate music for entertainment purposes. Back at the turn of the 20th century, the only other way to enjoy music was to play your own instrument, or, if you were musically challenged, listen to others play their’s.

When we arrived at the Lightner Museum at a few minutes after 11:00 AM, we were told that the music box demonstration was almost over, and the next one would take place at 2:00 PM. As we had a commitment in the afternoon, we resigned ourselves to missing out on seeing that particular collection. But, while we were exploring the top floor, Volunteer Coordinator, Toni Franklin, found us, and offered to give us a special demonstration of the music boxes.

There are two items of note here. First, when you visit the museum, make sure to be on the ground floor at 11:00 AM or 2:00 PM for a not-to-be-missed experience. Second, everyone from Executive Director, Robert Harper to the volunteer docents who make themselves available throughout the exhibit floors, is friendly, knowledgable and will make your time at the museum even more meaningful.

Because the extent of Otto Lightner’s collections is so large, only a small portion of the items he owned are on display at any time. And so it is with his music boxes. Approximately six machines are included in the demonstration, so the items below may not be the same ones you’ll see on your visit.

You might be fortunate enough to see an automaton – a musical monkey in a glass bubble, about 18 inches tall – but you won’t see it paint a self portrait or hear it play. Like several music boxes in the collection, it is far to rare and fragile to be played without a high risk of causing damage.

Manufactured in 1925, by the Western Electric Co, of Chicago, rapidly became a common sight in public places such as ice cream parlors and, after the repeal of the abomination known as Prohibition, beer joints.

Similar to a player piano without peddles, bellows push air up through holes in a paper roll triggering hammers that play individual notes. Piano-like music, with tones that sounded like a mandolin combined to do a respectable job of playing “Moon Slide Rag”.

Back in the day, you couldn’t select your own song. You inserted your nickel. and what ever song was up next was what you heard.

Perhaps the world’s first automatic disk changer, this marvelous music machine operates on two spring motors. The first motor rotates a disk marked with 28 holes, each representing a musical note. As the disk rotates “teeth” grab the holes in order to play the tune. The second motor moves each of the 12 disks in the stack into place. Toni played “O Come All Ye Faithful”, which sounded to me like bells playing in two separate registers. The effect was almost hypnotic.

In 1903, when the this music box first debuted, it carried a price tag of $2,000, a small fortune in those days. If you wanted to enjoy this music, you either had to be invited to the home of an extremely wealthy friend, or be a customer at a dining room in a fine hotel.

Much simpler, and far more affordable, you could purchase one of these music-makers from the Sears Roebuck Catalogue for $2.95 in 1901. A cylinder, called a cob, is the center of the action. The principal of how it functions, as well as the sound it produces as it plays “When You and I Were Young, Maggie” is similar to that of a harmonica.

Although the price may seem like a bargain to us, during the first decade of the 20th century, it was still considered somewhat of a luxury, despite the fact that the cobs cost just 18 cents.

In 1894, this joyful noise-maker was first rolled through the streets of – you guessed it – Philadelphia – on a cart with a dancing monkey on top while its owner played for tips. The machine possessed a 200-pound cob, but in this case, size did matter. The sound it produced was that of a full 88 key piano.

The Orchestrion (Orchestra in a Box):

In order to bear this moniker, this type of musical contraption must represent the sounds of multiple instruments, one of which has to be a pipe organ. Built in Berlin in 1870, the machine Toni demonstrated for us had a piano, glockenspiel, base drum, snare drum, cymbals and the mandatory pipe organ. Center stage is a cardboard book whose pages resemble the IBM punch cards of the 1960s The holes, each representing a musical note, run over a series of pins with each hole triggers a different hammer. “The Flower Polka” reminded me of an old-fashioned carousel, and I could visualize the wooden ponies moving up and down in time to the cheery music. When both the tune and my fantasy were over, the book had refolded itself perfectly.

The music box collection will be one of many highlights of your visit to the Lightner Museum, so allow yourself plenty of time to appreciate all the exhibits.

The structure now housing the museum had once been the Alcazar Hotel, known as “the castle of happy returns” during the 1890’s and first quarter of the 20th century. The hotel offered amenities such as a casino, sulfur baths, a steam room, massage parlor, gymnasium, bowling alley and the world’s largest indoor swimming pool of its day.

The Great Depression took its final toll in 1931, when the Alcazar closed and fell into neglect and disrepair. It was Otto Lightner who bought the property and breathed new life into the former luxury hotel with his unique fascinating and whimsical collections. Through his generosity, he transformed a waste into a WOW for all to enjoy.

For the purpose of researching this and future articles, we were guests of the Lightner Museum. However, all opinions are entirely my own.