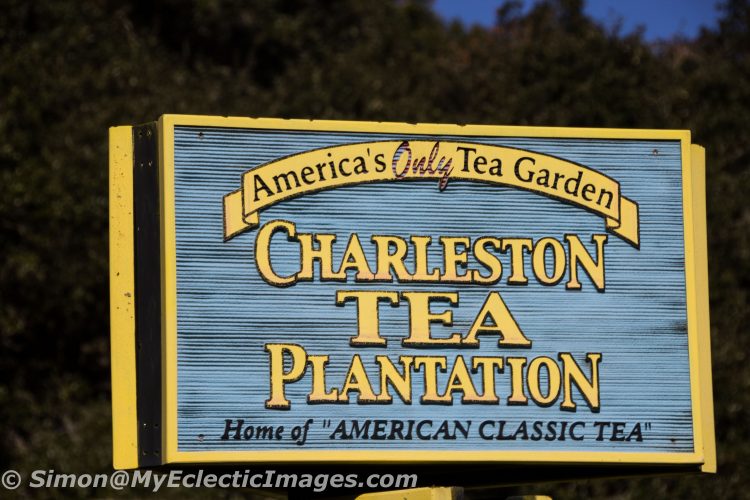 A Tea Party People of Every Political Persuasion Can Enjoy.

Shelves laden with boxes of tea bags and tins of loose tea stared back at us. Governor Grey, Plantation Peach, Rockville Raspberry, two types of mint, green and black varieties; all tempting us to take them home. We had sampled several in both their hot and iced forms, and each had its own WOW factor. The other WOW was we weren’t standing in a posh shop in London, but on Wadmalaw Island, A mere 25 miles south of downtown Charleston, South Carolina, at the only tea farm in North America.

Simon, Otto and I chose a warm, sunny day to make the drive out of enchanting, historic Charleston. The closer we got to Wadmalaw Island, the calmer we felt, the slower time seemed to move and the cleaner the air seemed to feel. The natural beauty of the island lent itself perfectly to a day of indulging in all manner of liquid refreshment. Wadmalaw is home to Firefly Distillery, Irvin House Vineyards and our first stop, Charleston Tea Plantation.

Upon our arrival, we were immediately invited to drink our fill of the hot and iced teas available for sampling. We filled our cups with hot Governor Grey – Earl Grey anywhere else – and headed out to catch the next trolly tour of the 127 acre farm.

One of the Charleston Tea Plantation Fields with Mature Tea Bushes (©simon@myeclecticimages.com)

The tour trolly bumped us along through verdant fields of now-dormant tea plants. The growing season for tea is April through October. Still, in early December, we could appreciate the view of lush plants in the flowering stage, dotting the landscape with white blooms. Considering the slightly rough terrain, – you would be wise not to fill your tea cup to the rim before boarding the trolly. Take it from me.

A Tea Flower at the Charleston Tea Plantation (©simon@myeclecticimages.com)

As we drove, we were treated to several recorded segments featuring the voice of co-owner, Bill Hall, explaining the farm’s history and commitment to successfully growing, producing and selling tea in an environmentally responsible manner. The plants themselves assist in this endeavor by being naturally disease and insect resistant.

Between recordings, our live guide explained the growing, harvesting and production processes that take the tea from field to cup.

We stopped to see the farm’s ultra-modern, computerized greenhouse that has a capacity of up to 14,000 young plants. Once ready to leave the climate-controlled environment of the greenhouse, the tea is hand planted in the fields, a process too delicate to be left to the impersonal touch of a machine. Once out in the elements, it takes three to four years before the plants reach a height where their leaves can be harvested.

When it’s time to harvest the tea, a novel piece of custom equipment affectionately known as the Green Giant, is pressed into service. If one were to cross a cotton picker with a tobacco harvester, this is what you’d get.

According to our guide the Green Giant does an excellent job of cropping the top layer of leaves, from the plants and gently sucking them in. Next, the leaves go to the factory, where they are dried on a withering bed for 12 to 18 hours. This is followed by the oxidation process, which takes less than an hour. The last step for what once were tender, succulent tea leaves is a baking process in order to extract any remaining moisture.

The Withering Bed in the Processing Plant at the Charleston Tea Plantation (©simon@myeclecticimages.com)

Our guide passed around a bottle of hand lotion made with tea. The pale green concoction had a floral fragrance that was pleasant without being overpowering. But the sensation, as I rubbed it into my hands, was that of something smooth and sticky. That stickiness lasted far too long for my liking. I couldn’t see myself tapping away on my computer keyboard, or trying to knit. Nevertheless, as a night hand treatment, it might work quite nicely.

Upon our return to the main building, we made a beeline for the iced teas. The Rockville Raspberry and Plantation Peach flavors were fresh without that artificial after-taste. Both the Island Green Mint and Carolina Mint – made with black tea – imparted a refreshing tingle going down.

Taking our last mint tea with us, we began a brief self-guided tour that involved moving from one video screen to the next. Each told part of the story of the tea-making process from the perspective of the Bigelow Tea Company, who partnered with Bill Hall in 2003 in order to grow Charleston into the successful enterprise we see today.

Although there are 34 tea-producing countries, it wasn’t until 1799, when François André Michaux, a French botanist, gave the Camellia sinensis plant to an American plantation owner named Henry Middleton. The first tea was planted on Middleton’s plantation where it began to thrive.

Heat, humidity, lots of rain and sandy soil are prime growing conditions for tea, and the Charleston area had – and still has – all of the above. Yet, multiple companies and individuals found it difficult to get a tea company off the ground. In fact, the most successful of these attempts had a less than twenty year lifespan.

And so it continued for more than 150 years, until 1960, when The Thomas J Lipton Company purchased a Summerville tea plantation on life support. Three years later, they moved the entire operation to Wadmalaw Island where it became a research station.

A quarter of a century later, Lipton sold the land to Mack Fleming, a horticultural professor, and Bill Hall, a third generation tea tester trained in England., In 1987, The Charleston Tea Plantation was born, and together, the partners developed the American Classic Tea brand, which is still grown today.

Financial problems and professional differences eventually destroyed the partnership, and in 2003, the Tea plantation landed on the auction block. The highest bidder, at 1.28 million dollars, turned out to be none other than the Connecticut-based R.C. Bigelow Company. The company enlisted the expertise of Bill Hall to oversee the plantation’s operations and keep it functioning smoothly.

Although all the processes in making tea are completed at the farm, tea destined for bagging is shipped to the Bigelow Company in Connecticut. There it is bagged, boxed and shipped back to South Carolina. While at Bigelow, the tea is kept completely separate from the company’s all-imported varieties.

Here are a few more facts about Charleston Tea Plantation:

After careful consideration, Simon and I left the gift shop with several tins of assorted tea for friends, as well as for ourselves. We also purchased a large mesh tea ball, which I thought would be perfect for making sun tea. With the unseasonably warm weather we’ve been experiencing this December, I had the opportunity to try it out with Rockville Raspberry, and it was one of the best jugs of tea the sun and I ever produced. If the weather holds, Plantation Peach is next.

Next time you visit Charleston, make sure to drive out to Wadmalaw Island and WOW your taste buds with the Charleston Tea Plantation’s all-American tea.

Although we were guests of the Charleston Tea Plantation, all opinions are entirely my own.