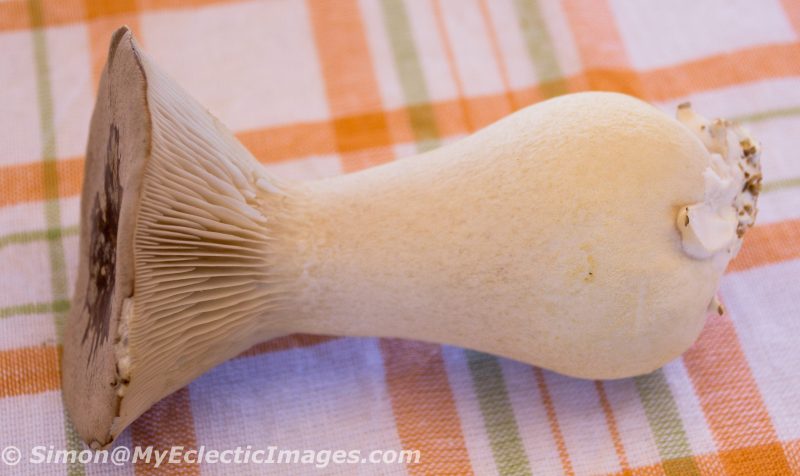 On a sunny Sioux Falls, SD Saturday morning, Simon, Otto and I were enjoying a stroll through the weekly farmers market, when our WOW sensors detected a find. In this case, the WOW turned out to be a table bearing king trumpet mushrooms, and standing behind the display, their creator.

Daniel Rislov, a full-time medical lab technician growing and selling shrooms on the side under the name Dakota Mushrooms and Microgreens, was not only enthusiastically plying his wares, but he was also eager to explain how they came to be in the first place.

“I’ve always liked mushrooms,” said Daniel, “but didn’t fall in love with them until I started growing them myself.” No doubt, his background in science made the growing process intuitive.

Three more transfers, and it’s showtime for Daniel’s crop of 10 varieties of fresh, delectable mushrooms. Depending on the variety, the time from culture to shroom is approximately three months.

Among the varieties Daniel grows and sells are portobello, king trumpet, tree oyster, shiitake and lion’s mane. Each variety has its own distinct texture and flavor.

Daniel, who as of September 2015 had been selling his mushrooms at the weekly market for two months, said his biggest crop thus far had been 60 pounds in one week. That may seem like a lot of mushrooms, but Daniel is looking toward the future, and if all goes according to plan, the fungi of his efforts will soon be appearing on menus of local restaurants, and he’ll have to keep up with the demand.

When we met Daniel and his glorious produce, he was living in an apartment, where two rooms – 10 by 10 feet and 9 by 9 feet – were designated as his mushroom farm. But he was looking forward to expanding production with an upcoming move into a recently purchased home to house himself and his mushrooms.

As Daniel spoke of “rooms”, “shrooms” and long-range plans to purchase a separate building for Dakota Mushrooms and Microgreens, I got up close and personal with a large king trumpet mushroom close to six inches in length. It felt like a portobello with a waistline and head. Daniel explained that the king trumpet was denser than the portobello, was meaty/crunchy in texture and had a nutty flavor.

The king trumpet holds up very well on the grill. Slice it lengthwise in thirds and season or marinate the slices. Then throw them on the grill for an outstanding side or vegetarian/vegan main dish. You can also sauté, broil or do anything you would with any ordinary mushroom, and you’ll get extraordinary results.

In general, hood quality mushrooms are not only delicious, imparting texture and earthiness to everything you cook, they are also surprisingly nutritious.

Naturally low in sodium, fat, cholesterol, and calories, mushrooms are believed to aid in the prevention of some chronic diseases thanks to their antioxidants and beneficial dietary fibers. There are 15 calories, 0 grams of fat, 2.2 grams of protein and 2.3 grams of carbohydrate (which includes 0.7 grams of fiber) and 1.4 grams of sugar in 1 cup of sliced or chopped raw mushrooms of almost any variety. They are also rich in B vitamins, and vegans rely on mushrooms as the only, non-fortified dietary source of vitamin D.

In case you’re now tempted to grow your own healthful scrumptious shrooms, keep in mind that nurturing these treats can be a high-maintenance undertaking. Aside from providing a sterile environment, you have to make sure your humidifiers are kept full, the humidity remains constant between 90 and 95 percent and that the temperature is kept at a cool 65 degrees. Then you need to make sure your mushroom farm is vented outside because the spores are harmful to the lungs.

Daniel likes to mist his shrooms a couple of times a day. Perhaps, with all this TLC, raising mushrooms may be good preparation for future parenthood.

There are many who don’t like – even detest – mushrooms. Some are actually friends of mine. But I have been a mushroom lover since childhood. I grew up on the canned pieces and stems. But once I tasted my first fresh shroom, there was no turning back. Experiencing new varieties of mushrooms over the decades has been a most pleasing gastronomical journey. But meeting someone who produces these fabulous fungi added a new level of WOW.

Daytime View of the Sioux Falls Close to the Farmers Market (©simon@myeclecticimages.com)

At the rate Daniel is going, there will soon be an opening in Sioux Falls for a medical lab technician, and we truly wish him and Dakota Mushrooms and Microgreens well.

Learn more about Dakota Mushrooms and Microgreens through Daniel’s website.

More information about what to do, where to eat and family-friendly special events can be found on the official City of Sioux Falls website.