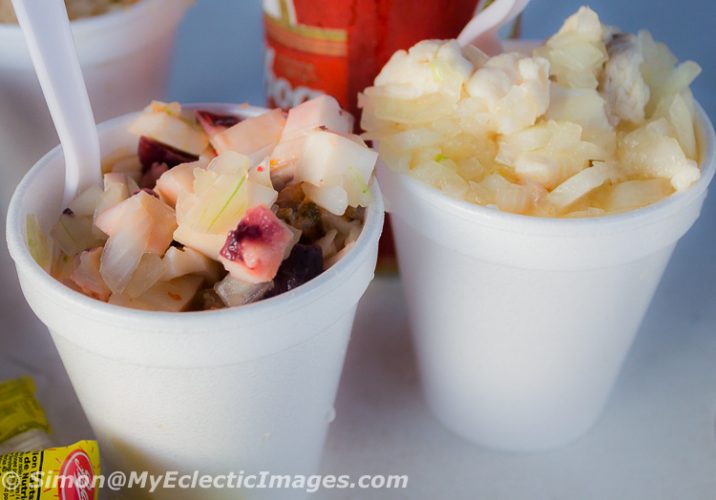 It was naked as the day it was caught. Well, that’s a bit of an exaggeration. First, the shell and vein had been removed. And then there was the citrus in which it was “cooked,” the hot sauce and the small amount of chopped onion. All I knew when I relieved my fork of the shrimp was that I had found a WOW of a ceviche.

For the uninitiated, ceviche is fish or seafood “soaked” in a citrus marinade, where it is cooked by the acidity from the lemon and/or lime juice. Ceviche options can include shrimp, prawn, lobster, mixed seafood, fish and squid.

On our first visit to Panama City in 2014, Simon, Otto and I were encouraged to dine at the Mercado del Marisco, or “Seafood Market”, a 20 minute walk from Hotel CentroAmericano, where we were staying. To get there we strolled through Cinta Costera, an expansive, impressive public park that runs along the waters of the Pacific. We followed our noses to a long, warehouse-style structure featuring several outdoor eateries on both sides of the building with similar menus offering a short list of options. We wandered around to the street side of the building, where there were lower priced, yet identical, menu items to be found.

Our first of several scrumptious discoveries was the assortment of ceviche. Now, in most restaurants, this Latin-American delight is presented artfully arranged on a plate garnished with such edibles as cilantro, tomatoes, avocado and other distractions from the pitiful amount of protein in the center. But this was not the case at the Mercado del Marisco. Our ceviche arrived at our table piled high in 8oz styrofoam cups, served with crackers. And what it lacked in presentation, it more than made up for in flavor.

Some of the seafood, such as the squid, was chewy, while the fish and shrimp were tender in texture. The citrus flavor was distinct, with a back end kick from the hot sauce. It was refreshingly cold, light and some of the best guilt-free eating I’ve ever enjoyed. Although Panama City is classy and cosmopolitan in its cuisine, Simon and I opted to treat ourselves to three consecutive dinners at the Mercado del Marisco during our 2015 visit. There were several reasons for this single-minded approach to dining, but the over-riding one was the ceviche.

One evening, Simon and I made our entire dinner out of a glorious assortment of ceviche. Another evening, we cut back on the ceviche, which ranged from $1.75 to $2.75., and shared a plate of fried corvina, patacones (twice-fried plantain patties) and salad for $9:00. We washed it all down with ice cold beer, at $1.00 per can and managed to walk away for just over $20, full to the gills and smiling.

The hot fish was crispy and very hot, while the ceviche was juicy and very cold. Both were so fresh, they were probably swimming earlier that day.

For us, though, it wasn’t only about the food. This was obviously a gathering place for families, couples, singles, tourists, and locals alike. The atmosphere was friendly and jovial, and strangers spoke to us as if they knew us. No doubt, Otto was a great conversation starter, but we witnessed similar interactions taking place all around us.

Yes, the atmosphere was friendly, and the hot food and cold beer were first rate, but it was the ceviche that took center stage. Despite it’s simplicity, it was a WOW in every sense of the word.

The Mercado del Marisco is located close to the Casco Viejo (old quarter) at the end of Cinta Costera.

Have you found a food in a foreign country that was so good, you couldn’t get enough? This inquiring mind wants to know, so please tell us in the comments.