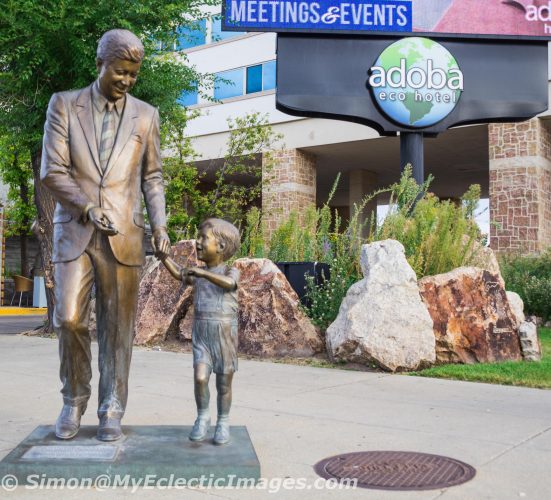 The day John F. Kennedy was assassinated was the day my childhood ended. At 12 years of age, I suddenly found myself living in a world where heroes died, and even someone as classy and elegant as Jackie could be denied a happy ending. J.F.K. had been my hero since the Cuban Missile Crisis, and, over a half a century later, standing face-to-face with his life-size bronze sculpture, I could still feel the horror, disillusionment and sense of loss of November 22, 1963. But it was a WOW moment just the same.

The Kennedy sculpture is one of 43 such artworks gracing the sidewalks in the historic district of downtown Rapid City. They are all touchable, and I suggest you take advantage of the opportunity to close your eyes and “see” the presidents from a different perspective. You might be surprised at what you learn.

As with his presidential counterparts, Kennedy is portrayed in a way that resonates strongly with those who stop to gaze a while at these representations of American history cast in bronze.

Kennedy, frozen in time at 46, is handing three-year-old John Jr., a toy airplane. Now, there’s a double heart-wrench if there ever was one.

George Washington, Andrew Jackson and Dwight Eisenhower are dressed in their military attire. The latter is portrayed straddling the English Channel with one foot on England and the other on Europe.

A Bronze of Andrew Jackson in Rapid City, SD (©simon@myeclecticimages.com)

You can sit down on a bench with Martin Van Burin for a photo op with the President as he reads his newspaper. You can also place your hand on the Bible as Chester Arthur is sworn in as President following the assassination of President Garfield.

It is no accident that George Herbert Bush and John Adams stand facing each other. Each had a son who also became president. Nor is it an accident that George Washington, first President of the United States, stands proudly in front of the Hotel Alex Johnson, which claims to be the oldest Hotel in Rapid City.

A Bronze of George Washington in Rapid City, SD (©simon@myeclecticimages.com)

One of the most arresting sculptures is that of Thomas Jefferson shown in the process of writing the United States Constitution. He is not looking down at his page. Instead, he appears to be looking toward the future. I couldn’t help wondering what he would have to say about the way his masterpiece is being treated by today’s politicians.

Sadly, Simon was unable to get the angle he wanted in order to do this great man justice, so you’ll just have to visit Rapid City and see him and the other presidents yourself. In fact, that’s the best idea I’ve had all day.

A Bronze of Abraham Lincoln in Rapid City, SD (©simon@myeclecticimages.com)

The City of Presidents project, as the presidential sculptures are collectively known, took flight in 2000 as part of a long-term – and highly successful – effort to revitalize downtown Rapid City. Over a 10 year period, four new sculptures were added annually to the collection, with the final three unveiled in October, 2010. Future sculptures will be added when each sitting president leaves office.

The artists responsible for these detailed and insightful sculptures of the 43 presidents include John Lopez, Lee Leuning, Edward E. Hlavka, James Michael Maher and James Van Nuys. All are natives of South Dakota, and well established in the art world.

Intended to honor each man who has held the office of President of the United States of America, as well as the American presidency itself, The City of Presidents has become a popular tourist attraction, as well as a source of local pride. Each sculpture was privately funded to the tune of $50,000; one of those situations when the best things in life truly are free. But for Rapid City locals and tourists alike whose eyes are fortunate enough to drink in the bronze inhabitants of the City of Presidents the WOW is nothing short of priceless.

When you visit Rapid City – and I whole-heartedly recommend you do – this website will help you easily locate your favorite presidents, as well as those for whom you wouldn’t vote if your very life depended on it.

During our stay in Rapid City, we were hosted by the Rapid City Visitors and Convention Bureau. All opinions, however, are entirely my own.