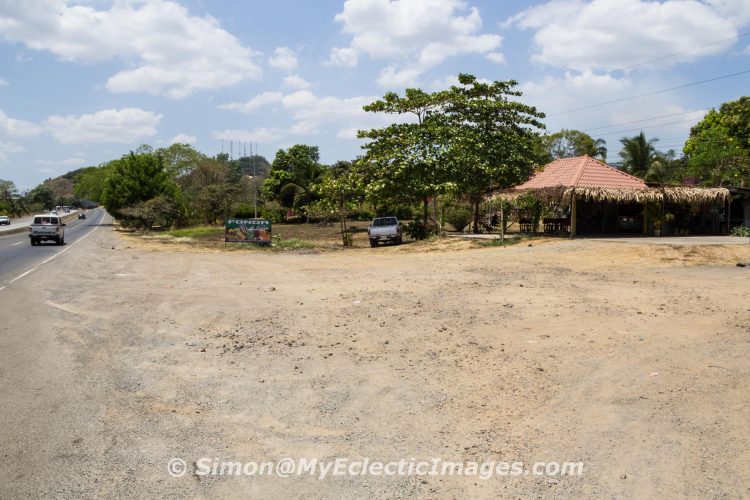 It May Not Be Fast Food, But It Definitely is Good Food.

The car thermometer read 38 degrees. This might be considered to have been on the cool side, except for the fact that in Panama, temperature is measured in celsius. Yes, it was around 100 degrees fahrenheit on the road back to Boquete after visiting friends in Coronado Beach, and we were hungry. The Golden Arches or some other similar burger joint? Greasy fried chicken whose secret blend of herbs and spices probably should remain a secret? Unfortunately becoming more common in Panama, but never for us. We pulled into a tiny restaurant that we had never seen before, knowing we were in for a WOW of a meal.

Fonda Flor de Cana was a small building set back from the road and fronted by a patio. This eating area consisted of five bare-topped tables – some glass, some something else – skirted with flowered ruffles secured with velcro to the tables’ perimeters. These adornments gave the otherwise drab area a cheery air with splashes of deep pink, pale blue, green, orange and yellow.

Simon strolled over to the hot table containing the food options – soup, rice, chicken in a sauce, beef in a sauce, lentils and grilled chicken – to make our selection. While we waited for our food to be brought out, a chicken appeared on the patio, nonchalantly trotted about for a few moments, then disappeared. If this was a preview of tomorrow’s menu, we didn’t want to know.

Our lunch arrived neatly arranged on oval plates with a soft blue on white design. Along with the generous portions of grilled chicken, rice and lentils was a scoop of fresh homemade coleslaw that had obviously been kept in a cool place away from the hot table.

The chicken had crisp skin, was moist, subtly seasoned and had a slightly smoky flavor. The lentils were served over the rice, which gave the otherwise dry grain a savory sauce in which to mellow out. The slaw had a light mayonnaise dressing that held the shredded cabbage together without drowning it. Our lunch wasn’t exactly comparable to a meal at the Ritz, but it was fresh, flavorful and set us back a grand total of $8.00.

The Open Oven Outside the Kitchen at Fonda Flor de Cana (© simon@MyEclecticImages.com)

How did we know to stop at Fonda Flor de Cana, even though we had never dined there before? This type of eatery is ubiquitous in cities, towns, villages and along roadsides throughout Panama. There are subtle differences in menu and mode of service between them, but they have the following in common.

Simon and I frequent two such restaurants in Boquete, where we often meet friends for lunch: Restaurante las Orquideas and Restauante Jardines de Boquete.

Both add a strip of sweet plantain to your meal, and Restaurante las Orquideas offers a choice of roasted potatoes or rice for your starch. They also throw in a glass of lemonade. Restauante Jardines de Boquete has the best soup, optionally served with a plate of rice and a small bowl of stewed red beans on the side. If you pay more than three or four dollars at either one, you were exceptionally hungry, or you ate way more than is good for you.

As I have mentioned in a previous article, eating where the locals eat is a good way to save money, and enjoy a tasty authentic meal. For us, this strategy also enables  us to support family-owned Panamanian businesses. When in Panama, give these small local restaurants a try. Both you and your wallet will say, “WOW”.