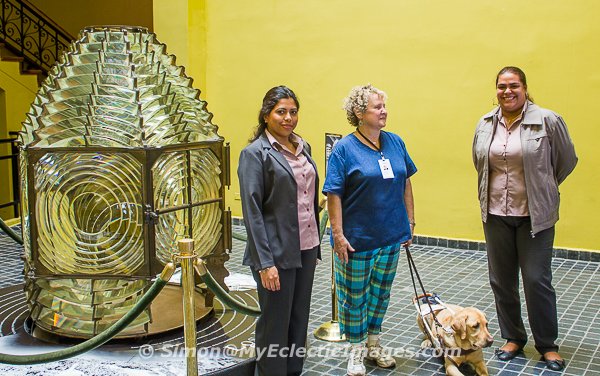 How One Dog Had His Day in Panama City.

There’s nothing like an air conditioned museum on a hot, humid day. You can feed your mind while your body tries to recover from hours of abuse trudging around outdoors. This was how Simon, Otto and I ended up in the Panama Canal Museum after exploring Panama City’s Casco Viejo (Old City) on foot. We had expected to enjoy the fascinating historical exhibits that traced the history of the Panama Canal from its inception to the present. What we didn’t expect was the WOW that awaited us when we walked in.

A little background here: Panama is consistently inconsistent when it comes to access for service animals. Perhaps this is because there may only be a handful of them in the entire country.

There is appropriate legislation pending, but it has yet to be passed – a story for another time – so we never know what kind of reception we are going to receive at any given public establishment. Our expectation was that we would be stopped at the door, and told that dogs were not allowed. This would be followed by our lame attempt to explain, in our fractured Spanish, that this was a ‘pero guia’ and not a pet. Sometimes this approach works, and sometimes it doesn’t. This time, however, nothing of the kind occurred.

We were greeted warmly, and informed that Otto was the first ‘pero guia’ to visit the museum. We were then posed, by the PR manager, with the museum’s director for a publicity shot. My awesome Otto is now somewhat of a celebrity, at least in the Panama Canal Museum.

As enjoyable as this diversion was, we soon got down to touring the museum, assisted by a helpful docent. I was handed a pair of latex gloves, and invited to touch exhibits not behind glass. To my surprise, this included a porcelain tea set from China – many came from China to work at all levels of the canal’s construction – which was so thin, holding one of the cups almost gave me a heart attack. If I held it too tightly, I might crush it. If I didn’t hold it tightly enough, I would surely drop it. Gingerly setting the cup back in the safety of its saucer, my fingers continued to take in the delicate beauty of the hand-painted piece.

The china from China was part of the eclectic collection of more than 16,500 photographs, works of art, historical objects, books and newspaper articles that tell the fascinating story of the era – 1904-1999 – during which America controlled the Canal Zone in Panama.

In March 1998, with the official handover of the canal to the people of Panama a little over a decade away, three Floridians, who had once lived in the Canal Zone, embarked on a major historical preservation effort designed to depict the history of this era. Soon others joined the project, while volunteers living in Panama began to collect artifacts, photographs, books, and related materials now on display in the Panama Canal Museum.

The dedication and hard work of these determined individuals, resulted in the only museum whose sole purpose is the historical preservation of the American era of one of the world’s greatest wonders. Not to mention the contributions made by numerous nations to the construction, operation, maintenance, and defense of the Panama canal.

Located in a masterfully restored building, which once housed the office of the French Canal Company, the U.S. Isthmian Canal Commission and the main Post Office, this museum is well worth a visit. Certainly, for us, it was a WOW of a cool place to spend a couple of hours in more ways than one.

You can browse the digital collection, learn more about the museum and the history of the Panama Canal at their website.

All signage at the museum is in Spanish, however, English-speaking guides and audio tours are available for a small fee.

Have you had an unexpected surprise while visiting a museum or other cultural site? Let us know in the Comments.