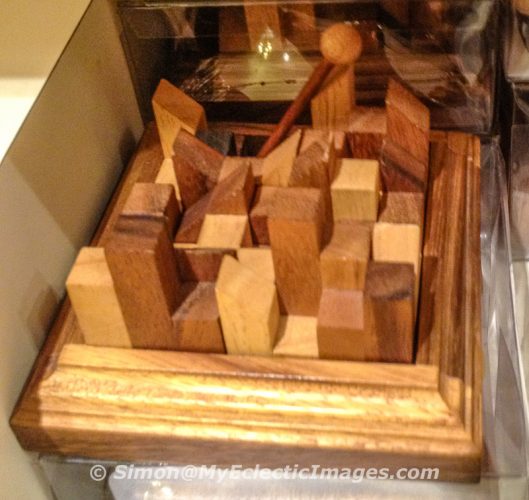 Israeli Ingenuity at Its Mind-Boggling Best.

Systematically moving my fingers over the smooth surface of the wooden box, I searched for a clue as to how to open the two small drawers it contained. It seemed hopeless, but just when I was about to throw in the towel – or fling the box across the room – my fingernail found the hairline crack. A gentle push opened one drawer, but where was the second one? This puzzle was one of a multitude of challenging WOWs to be found in the Gaya store in Tel Aviv.

My cousin, Eli had taken us to this magical shop as a finale to an afternoon visiting the nearby port city of Jaffa. As twilight descended, he led us to what had once been a railway station, that had been converted into an area with enough restaurants and shops to satisfy the diverse tastes of the most discriminating locals and tourists.

Immediately upon entering Gaya we received an enthusiastic welcome from the two young women who were on duty in the store. Without preamble, they challenged Simon to find a hidden drawer in a small wooden box. After several minutes and a few grunts of frustration, he did manage to solve the puzzle, and by then, we were hooked.

And so we spent close to an hour — honoring the words on a poster prominently displayed on the wall of the shop that read, “We don’t stop playing because we grow old. We grow old because we stop playing.”

Sign in the Gaya Store in Tel Aviv (©simon&myeclecticimages.com)

The wide variety of Gaya merchandise ranged in complexity, purpose and age appropriateness. One item we couldn’t resist was a trap for holding a wine bottle hostage. Our plan was to give it to a friend as a birthday present, along with a nice bottle of wine, and see how long it would take her to get the bottle out. We hoped she would have as much fun as we did trying to discover how to release the potable prisoner.

A Selection of Gaya Puzzles (©simon&myeclecticimages.com)

Gaya Enterprises has been in operation since 1996, and has earned an international reputation for the quality and design of its hand made products, each of which is made of all-natural wood. The company prides itself on its commitment to meeting the highest American and European environmental standards, as well as in its membership in the International Puzzlers Association.

It is easy to appreciate these “toys” for not only their cleverness and potential for enjoyment, but for the intelligence and attention to detail that goes into crafting them.

So, did I ever find the second drawer? The answer is yes, but I have to confess I had the advantage of some subtle prompting from one of the employees. Perhaps she reaches a point with customers like me, where she can no longer stand to see them suffer.

As for our friend, both she and her husband had a devil of a time getting the bottle of wine out of its unique packaging. It took time, but they finally managed to free the bottle. Although they would never admit it, I’m convinced they enjoyed the trap even more than the wine.
Gaya’s flagship store is at the old railway station in Tel Aviv, with several franchise locations scattered around Israel. But fear not, you can browse the catalogue and purchase cubes, pyramids, puzzles and games of all kinds – as well as that pesky bottle trap – online. But if you are ever in Israel, make sure you take a break from sightseeing and allow yourself to play. There’s a special WOW waiting just for you.